“I earnestly beg God
to guide your business
according to His good
pleasure, and I hope
that He will be glorified
by it.”

Vatican Opens Cause for Canonization of S. Blandina Segale

Sisters of Charity Monica Lucas, Celestia Koebel, Patricia Sabourin and Victoria Marie Forde attended the press conference announcing the cause of sainthood for Sister Blandina Segale, on June 25, 2014. The decree was hung on the doors of the Cathedral Basilica of St. Francis of Assisi in Santa Fe, NM on June 29. Participating in the ceremonies were: Most Rev. Ricardo Ramirez, Bishop Emeritus of Las Cruces (Postulator), Most Rev. Michael J. Sheehan, Archbishop of Santa Fe (Judge for the Cause), Victor Limary (Board of Directors Vice-Chair CHI St. Joseph’s Children), and Allan Sanchez (Petitioner for the Cause, President & CEO of CHI St. Joseph’s Children). St. Joseph’s Children was founded by Sister Blandina while ministering among the poor in the New Mexico Territory.

Fiscal Year 2014 concluded with exciting news for the Charity family following the announcement that the cause for the canonization of Sister of Charity of Cincinnati Blandina Segale had been approved. The cause of Sister’s canonization is being led by the board of St. Joseph’s Children, Albuquerque, New Mexico, a member of Catholic Health Initiatives. Based on documents already submitted to the Vatican, S. Blandina can now be called by her new title, Servant of God.

The Archdiocese of Santa Fe, New Mexico, held a press conference on June 25, 2013, to announce the Vatican’s immediate permission to open the cause. On June 29 a pontifical ceremony at St. Francis Cathedral in Santa Fe was held to post the official decree on the Cathedral Basilica of St. Francis of Assisi’s doors, announcing the cause of Servant of God Sister Blandina.

S. Blandina is remembered fondly in the Southwest and at home in Cincinnati where she entered the Sisters of Charity of Cincinnati on Sept. 13, 1866. After spending several years teaching in schools in Ohio, the young Sister was sent, by herself, over the Santa Fe Trail in 1872 to the Colorado Territory. Here she was initiated into frontier life with all its adventures and dangers. Assigned to teach in the public school, she also had encounters with Billy the Kid and “frontier justice.”

In 1877, S. Blandina moved south to Santa Fe where her exciting activities continued in the schools, orphanage, and hospital the Sisters operated. She came to be known in every level of society from members of the state legislature to indigent patients at St. Vincent Hospital. After spending four years in Santa Fe, she went to Albuquerque where, besides her work of teaching, opened a Wayfarers’ House, became a defender of Native Americans and “Mexicans,” and went on begging trips to mining and railroad camps to raise money to support the Sisters’ missions.

The intrepid S. Blandina returned to Ohio in 1893, and four years later was sent, with her sister, S. Justina Segale, “to see if they could do anything for the poor Italian [immigrants]” in the inner city of Cincinnati. Going to explore the conditions with only five dollars in their pocket, these two sisters founded and managed Santa Maria Institute, the first Catholic settlement house in the United States in 1897. They enlisted assistance from numerous sources and established services of every description to assist the poor and needy. In the process they visited the jails and charity wards in the hospitals and became involved in issues such as human trafficking and juvenile delinquency

S. Blandina’s stories of trust, courage, spirit and determination inspire and cause laughter at the same time. She was a friend and model to many as she carried out her ministry to serve God’s people with all the love that was in her being. Her works continue to be relevant today and inspire in our own response to needs and issues.

S. Blandina Segale, pray for us.

The purpose of the World Day of Prayer for Vocations is to publicly celebrate vocations to ordained ministry and religious life in all its forms. Many parishes and religious institutes commemorate this day with prayer for vocations and vocation promotion events. 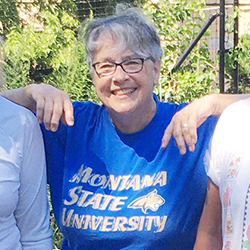 Master Gardener S. Winnie Brubach discusses the EarthConnection garden, its beginnings and how it has educated and provided for many throughout the years.