“I earnestly beg God
to guide your business
according to His good
pleasure, and I hope that
He will be glorified by it.” 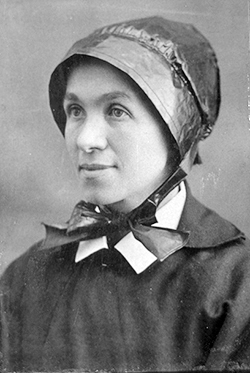 The Sisters of Charity of Cincinnati are pleased to announce that the cause for the canonization of Sister Blandina (Maria Rosa) Segale, SC (1850-1941) has been approved. Sister Blandina was born in Cicagna, Italy, and accompanied her family to the United States when she was 4 years old. Educated by the Sisters of Charity in Cincinnati, she entered the Congregation in 1866 and began her ministry by teaching in several schools in Ohio.

In 1872 the young Sister was sent to Trinidad, Colorado, and for the next 21 years served on various missions in the Southwest, including Santa Fe and Albuquerque, New Mexico, and Pueblo, Colorado. Her colorful memoir of her years in Colorado and New Mexico has been published as At the End of the Santa Fe Trail. Her adventures have been featured in novels, television programs, histories, and even a comic book. These often focus on her fearless befriending of Billy the Kid and his gang and also Native Americans in that hostile era.

Returning to Ohio in the early 1890s, Sister Blandina and her sister, Sister Justina Segale, were sent “to see if they could do anything for the poor Italian [immigrants]” in the inner city of Cincinnati. The story of their founding and managing the Santa Maria Institute (1897), the first Catholic settlement house in the United States, is awe-inspiring. The Sisters along with their co-workers and collaborators assisted many needy groups in the city and became involved in issues such as human trafficking and juvenile delinquency. An account of this work is told in a series of journals kept by Sister Justina, and in The Story of the Santa Maria Instituteby Anna Minogue.

The cause of Sister’s canonization is being led by the board of St. Joseph’s Children, Albuquerque, New Mexico, a member of Catholic Health Initiatives. Based on documents already submitted to the Vatican, Sister Blandina can now be called by her new title, Servant of God. This is the first step towards canonization.

The Archdiocese of Santa Fe, New Mexico, will celebrate with two events. On Wednesday, June 25 a press conference will be held at 11 a.m. Mountain Time at CHI St. Joseph’s Children (formerly St. Joseph Community Health) in Albuquerque to announce the Vatican’s immediate permission to open the cause. On Sunday, June 29 at 3 p.m. Mountain Time there will be a pontifical ceremony at St. Francis Cathedral in Santa Fe. There Archbishop Michael Sheehan will post the official decree on the Cathedral Basilica of St. Francis of Assisi’s doors, announcing the cause of Servant of God Sister Blandina.