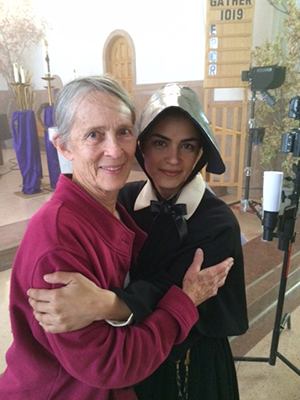 S. Carol Marie Power met Alma Sisneros, the actress portraying Sister Blandina Segale, on the set of the pilot of “At the End of the Santa Fe Trail”.

Production recently concluded on the pilot of the television series “At the End of the Santa Fe Trail,” based on the life of Servant of God and Sister of Charity of Cincinnati, Sister Blandina Segale. Sister Blandina is currently under consideration for beatification and canonization in the Catholic Church.

Plans for the television series were announced in July 2016; since, production and crew members have visited and consulted with the Sisters of Charity in order to ensure the series will remain true to the story of Sister Blandina, who entered the Sisters of Charity of Cincinnati in September 1866 and eventually found herself ministering in New Mexico. She is widely known for her compassion for outlaws, championing for justice, and building schools and hospitals in the rugged Southwest.

In February 2017, Tomas Sanchez, director and producer of the project, and Alma Sisneros, the actress playing Sister Blandina, visited the Sisters of Charity Motherhouse in Mount St. Joseph, Ohio. Ms. Sisneros had the opportunity to visit with Sisters Annina Morgan and Loretto Burke to research her character; both Sisters had the privilege of meeting Sister Blandina in her later years. Mr. Sanchez and Mark Steinig, executive producer, spent time in the Sisters of Charity Archives learning more about Sister Blandina’s life and legacy.

Production on the pilot wrapped up last week after filming in March in Santa Fe and Albuquerque, New Mexico, and Chama and Antonito, Colorado. Allen Sanchez, petitioner of Sister Blandina’s cause for canonization, visited the set last month and said, “These people have really made Blandina part of their life. I am amazed to see her story come alive in front of my eyes; they are capturing her spirit on film. I have heard so many crew members tell me they are praying to Blandina, it is moving.”

The pilot is currently in postproduction and producers were working this week in Los Angeles, California, to secure a full order for the series with a distributor. Producers and those working closely on the canonization process are hoping the series will spread Sister Blandina’s message of nonviolence, her love for the poor, and her advocacy for health care and public schools.