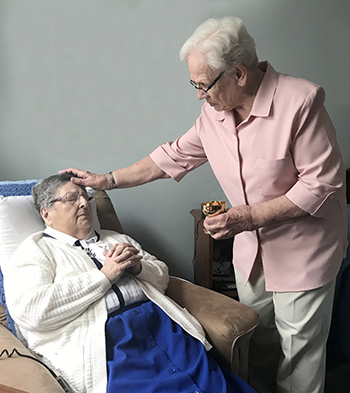 “Speak Lord, your servant is listening.” Sister of Charity of Cincinnati Diana Durling holds this Bible verse close to her heart, saying it reminds her to answer God’s call to be present with everyone, especially in her many volunteer responsibilities.

In 2010, S. Diana retired from pastoral ministry. However, she says her volunteer ministries are tied right in with her former work. Currently she volunteers as a Eucharistic minister at the Motherhouse and Mother Margaret Hall nursing facility at Mount St. Joseph. She considers this ministry a joy and a privilege, and her most important role.

Among her countless volunteer ministries, S. Diana has served as a liaison for many of her Sisters over the last six years. She is an advocate and listener who sits with her Sisters one-on-one while they share their stories and S. Diana assists them in any way she can. As many are unable to write and be physically active, S. Diana runs errands, reads to them, writes letters and cards, and drives them places. For those with dementia, she likes to talk with them about their fond memories, which is sure to bring smiles. On birthdays and holidays, Sister says she enjoys giving them small tokens of love and appreciation like flowers and candy. Every encounter as a liaison is a faith-filled time of prayer, relationship, and personal growth for S. Diana.

Listening and simply being present with her Sisters are among the most special blessings to S. Diana. “Their wisdom gleaned from life experiences is, to me, the light of God’s presence within them,” she says. “I am more than uplifted after being with them; they give me inspiration to enjoy life.” When she serves as a liaison, she says she can feel God’s presence.

Advocating for her Sisters is very similar to her background in pastoral ministry. Starting out as an elementary school teacher for 29 years, S. Diana didn’t join the Sisters of Charity Community until she was 43 years old. As a Novice, one of her duties was visiting the elderly Sisters, which always brightened her day. Five years after becoming a Sister, S. Diana became a certified chaplain and served as pastoral minister in various churches and hospitals around the country until she retired eight years ago.

Additionally, S. Diana lectors at the Motherhouse, and serves as a greeter at the Front Desk of Mother Margaret Hall. For the Sisters new to the Motherhouse, she serves on the welcoming committee which puts together a little booklet with information on locations and things to do around the Motherhouse. In the spare time she finds, S. Diana likes to walk down the halls of Mother Margaret Hall and sit and talk with anyone she meets. “Hopefully,” she says, “I am a comforting and accepting presence for my Sisters, serving their needs, whatever they may be.”