Uncovering History in the Archives

Sisters of Charity Archivist Veronica Buchanan designed this display case containing items recently donated to her from the family of the late S. Mary De Sales Leheney for the Motherhouse’s McCann Room.

For more than 200 years, the Sisters of Charity have played a large role in shaping communities and pioneering careers. Naturally, their history is immense. Every day, something new is donated to the Archives at the Motherhouse to be preserved. A group of dedicated Sisters of Charity and Associates, along with Archivist Veronica Buchanan, handle each and every item that is brought in with fervor. This is because among the common finds, there are always special treasures to be uncovered and shared.

Veronica details a step-by-step process on how the women in Archives work together to organize everything with ease and enthusiasm. First, donated items are taken to what is called the ‘staging area’ to determine what type of item it is. Photographs are managed by S. Pat McQuinn who places them in bins according to their subject; S. Joyce Brehm handles the artifacts which are placed in cabinets with a note of history; and Veronica oversees the archival material which mostly consists of common items like letters and news articles to go into the Sisters’ files.

Recently, quite the unexpected find was donated to the Archives. Veronica recalls an event over a year ago when she received an email from a man named James McCarthy who told her he had a scrapbook with pictures of his great-aunts, S. Mary De Sales Leheney who passed away in 1934, and her sister, S. Mary Seraphica, who passed away in 1929. Veronica didn’t think too much on it. Then, completely out of the blue, and over a year later, Mr. McCarthy arrived in the Archives saying he had materials from S. Mary De Sales Leheney that he would like to donate. 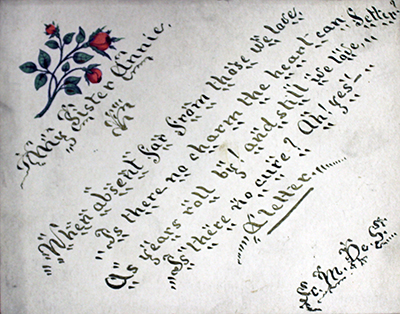 The Christmas card S. Mary De Sales Leheney sent to her sister that showcases her unique signature and penmanship.

Intrigued, Veronica soon realized what a treasured find this was. Mr. McCarthy had four generations of Catholic religious items from his family, including items that belonged to S. Mary De Sales herself. Though it didn’t personally belong to Sister as it was made a little after her time, Archives decided to keep a fully intact sick-call outfit, which contains all of the things a priest would use to administer last rites. Veronica says the outfit is emblematic of Sister’s career in the medical field, where she would have been very familiar with that type of item. The personal items of S. Mary De Sales Leheney include her devotional books and prayer books, a Christmas card that she sent to her sister that showcases her unique signature and penmanship, and a Bible that she gave to her mother in the 1870s. Veronica remarks that these items are so special because they personalize a significant figure in the history of the Sisters of Charity. 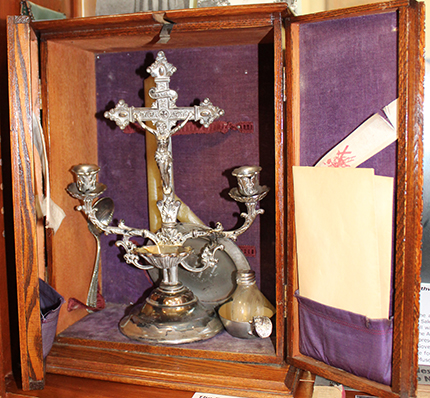 This fully intact sick-call outfit, donated by the family of the late S. Mary De Sales Leheney, contains all of the things a priest would use to administer last rites.

Over the years, Archives has uncovered many other interesting and historical items and documents. Just last week, they received the presider’s chair from the Mater Dei Chapel at Mount St. Joseph University (Cincinnati, Ohio), which was probably designed and/or created by S. Augusta Zimmer (a well-known Sister of Charity artist) in 1963. Earlier this year, S. Mary Ann Flannery dropped off more than 40 8-mm and 16-mm films that are the only moving record of the Vincentian Sisters of Charity. In late July, Veronica held a “film premiere” of clips from the collection at Mother Margaret Hall nursing facility (Mount St. Joseph) for many of the former Vincentian Sisters as well as retired Sisters of Charity to enjoy. One of Veronica’s most memorable items she has helped preserve, however, is the mystery grave marker that was found and brought to Archives this summer.

Veronica, who has always had a passion for history, was not expecting the history of the Sisters of Charity to have such an enormous breadth when she first started working in Archives two years ago. She says preserving the Community’s history is very important because of the role the Sisters had in leading the Church and in pioneering different career fields. Their inspiring stories should not be forgotten, and Archives plans to preserve as much as they can for many years to come. 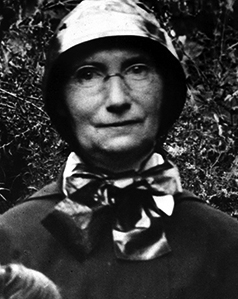 On Feb. 21, 1901 New Mexico’s Territorial Board of Health issued a license for the practice of medicine to a S. Mary De Sales Leheney in Santa Fe, N.M. Today that would scarcely be a newsworthy item, but in 1901, in the Territory, no other woman had yet been licensed, and even in the United States there were few women doctors.

To make the situation unique in medical history, not only had S. Mary De Sales never attended medical school, she had terminated her formal education in the eighth grade and then worked in a Cincinnati shoe factory before entering the convent. Assigned to Santa Fe after her year of Novitiate, she went West over the newly opened Santa Fe Trail in 1881. There, in a little adobe hospital where destitute men from mines, road construction sites, and lumber camps were cared for, she found opportunity to give full scope to her remarkable gifts of mind, heart and body. Quickly she acquired nursing skills, became an excellent diagnostician, a capable pharmacist and an invaluable aide to the few overworked doctors in the Territory.

One day a poor fellow was brought in from a saloon brawl with a bullet lodged in his throat. No doctor was available and Sister, knowing that unless he had surgery at once the man’s minutes were numbered, gathered the necessary instruments and performed the operation as she had watched doctors do it time and again. The man recovered in record time and after that whenever a patient’s life depended on the immediate probing for a bullet, or the suturing of a knife wound, or even on the amputation of a gangrenous limb, if no doctor were present, Sister would take over in the operating room. Her patients made fine recoveries and doctors who examined them after their emergency operations were loud in their praise.

Sister was 45 years old when grateful patients, admiring doctors, and appreciative VIPs in Territorial government circles initiated the movement to have her licensed, which would officially provide her with the extraordinary permission to continue in her work without medical school diploma. The public ceremony brought people from the farthest boundaries of New Mexico to see the nun everyone in Santa Fe knew as “mother” made a certified doctor – a doctor with an eighth-grade education!