Let There Be Light: The Move to Cleaner Energy 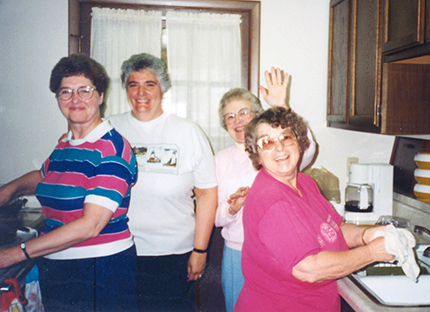 (From left) Sisters of Charity Esther Marie Humbert, the late Sandy Alvin, Patricia McNally and the late Shirley Dietrich enjoy a trip to the Fairfield Glade townhouse in Tennessee.

Settled in the lush green city of Fairfield Glade, Tennessee, was a townhouse owned by the Sisters of Charity of Cincinnati. It was a gift from a friend of Good Samaritan Hospital, in Cincinnati, Ohio. The home was originally meant to give the Sisters ministering at the hospital a break from their busy lives. Though the Sisters no longer own the vacation home, memories from the Sisters who visited live on.

S. Roslyn Hafertepe recalls her time at the Fairfield Glade house which brought joy to her and her companions. Sister recalls George and Reba Schlegel, the caretakers of the property who welcomed many Sisters. She has great gratitude for them and made many delightful memories from her stays in Tennessee.

Once a year, S. Noreen Ellison, who was living in Tennessee at the time, would travel to the Fairfield Glade house for a meeting with her small group, who came from Tennessee and Georgia. After going over the Congregational agenda, the Sisters would pray together and simply enjoy each other’s company. In addition, one year S. Noreen went on a retreat with two of her fellow Sisters of Charity and two Dominican Sisters for five days at the house. Each day they would pray together, spend hours in solitude, listen to spiritual talks on tapes, and then participate in recreational activities like swimming, basketball, and making stained glass. S. Noreen says it was a wonderful, quiet place.

Another memory of staying in Fairfield Glade involves the adventures of Sisters Mary Fran Davisson and Annette Paveglio. S. Mary Fran reminisces about all of the wonderful activities they enjoyed, like going on hikes, swimming, playing tennis, and horseback riding. The pair also traveled to Nashville, Tennessee, and spent time at the Grand Ole Opry. She says of her time in Tennessee, “God’s beauty which surrounded us was wonderful.”

The cheerful remembrances from stays at the Fairfield Glade townhouse will continue to be told even though the house itself in no longer there. These memories will live on in the hearts of the Sisters.