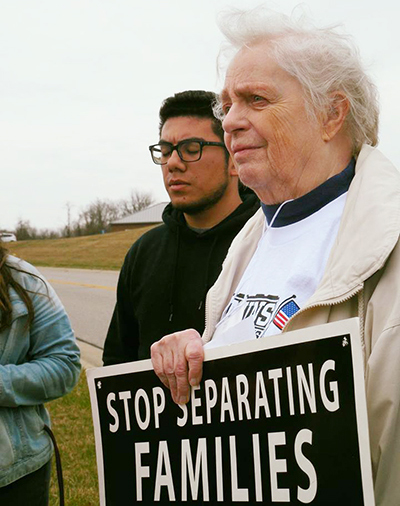 Sister of Charity Jean Miller participates in a Nuns on the Bus rally protesting the separation of immigrant families.

“I am so grateful for all the experiences that God allowed me to participate in. Volunteering in retirement is a wonderful gift to connect the things I learned in my active ministry together,” says Sister of Charity of Cincinnati Jean Miller.

S. Jean’s active ministries took her around the world where she was blessed to have gained many unique experiences that inspired her life goals as well as her volunteer path. For nine years (1961-1970), S. Jean ministered in Rome, Italy, teaching English language and literature at an all-male boarding school. Additionally, she spent one year working for a bishop in the Vatican, during the time of the Second Vatican Council. Her time there provided her memories that she will never forget.

S. Jean’s mission work continued as her long-time wish to minister in Peru came to fruition. She spent two years (1982-1984) ministering to the Peruvian people. To add to the blessing, she served at the time of the Liberation Theology movement in Latin America. Sister says it was a God-given gift to be there. In Peru, S. Jean grew her love of the environment by learning how to live simply, as there was no water in the house she lived in. Currently, S. Jean serves in a group which facilitates education on the environment.

S. Jean returned to the states and ministered in administration until she was missioned to Nicaragua, a country that was in the midst of war. “When you live in a war zone,” S. Jean says, “creativity is essential.” She learned a great deal about how to use natural resources, like how to make and use a solar oven, before her desire to help immigrants became God’s plan for her life.

Settling on the border between the U.S. and Mexico, S. Jean’s years of gaining knowledge on simple living and natural resources came full-circle. She began to coordinate the building of straw-bale houses for the poor, and realized she had a knack for building. Once home in Cincinnati, Sister ministered in the Sisters of Charity Office of Peace, Justice, and Integrity of Creation before retiring in 2008.

Feeling like she has been immensely fortunate in her ministries, S. Jean recognizes that all of her efforts put in around the world have been focused on one thing – working toward justice for others. This focus continues today in her many volunteer ministries. Ten years ago, Sister retired and began spending time helping immigrants. Fearing deportation for minor misdemeanors like a car taillight being out, S. Jean would accompany them to court for support.

These days, as a member of Nuns on the Bus of Ohio, a group of Sisters from different congregations who strive to fight and bring awareness to injustices, S. Jean continues her effort for justice. Alongside her fellow Nuns on the Bus members, the group tours the state of Ohio bringing issues like immigration, the environment, and women’s rights to the attention of legislators and the public. One tour involved traveling to all social service agencies and legislative offices in Ohio to talk about how the budget for social services did not have the people in need as top priority. Another tour focused on the Board of Elections, where the Nuns on the Bus made a plea to fix the issue of the poor and minorities being purged from voting lists, leaving the wealthy to have more say in elections. They then walked the streets and visited food pantries to register poor persons who had been purged from voter lists.

In February, S. Jean and the Nuns on the Bus focused a tour on immigration and deportation. They traveled to different universities in Ohio, including SC sponsored ministry Mount St. Joseph University (Cincinnati), to give sessions to educate about immigration. A rally was held outside both the Boone County (Kentucky) and Butler County (Ohio) detention centers, which are filled with immigrants who are not criminals, but are taken in for minor misdemeanors, many of whom are deported to dangerous countries. At the end of June, S. Jean attended a rally to protest the separation of immigrant families. This ministry, she says, strengthens her relationship with God, because “Seeing the faces of immigrants is like seeing the face of God.”

S. Jean’s past experiences gave her the gift of being able to really understand immigrants and have given her a strong will to fight for them. She says, “The gifts I received in other countries, I intend to use here. When possible, I feel as though I need to step forth because our world is still very unjust.”
The discussions S. Jean and the Nuns on the Bus have about planning their bus tours are a joyous time. The conversations are creative and bring the members together on important issues, which always leaves Sister feeling proud. Being called by God and the Sisters of Charity mission of doing justice for the poor and marginalized is truly what God put S. Jean on this earth to do.