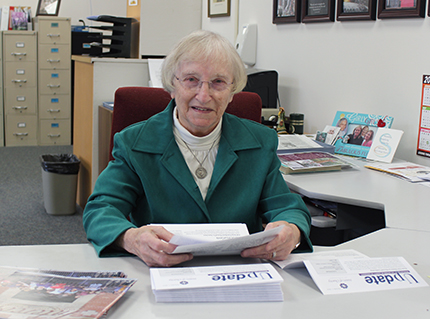 Living in the spirit of the Good Samaritan is no small task, but retired Sister of Charity Patrice Vales proves that the smallest act of kindness is sometimes all it takes. Such is the case when she pauses whatever she is doing to stop and help a Sister in the hallway who is having trouble walking or needs help carrying her package. The role of Good Samaritan has been a role that S. Patrice answers with humility and grace, even in her retirement.

Sister retired in 2006, but went on to offer her services wherever needed. “Eucharist, Scripture and Service” are the three words that she has embroidered on her bookmark and they are the same words that she has dedicated her life to. After a ministry of teaching that lasted for 54 years, Sister nurtured budding Christians in the RCIA program and educated amenable youth with her tutoring positions at Elder High School, Seton High School and Holy Family over the course of her 12-year retirement. In addition to her skills as an educator, Sister also offered her services as a docent for the Sisters of Charity Archives and assists S. Mary Ellen Murphy with her Art classes in the Mother Margaret Hall nursing facility. She has been active in her involvement with her Congregation with a broad range of responsibilities from package delivery to volunteer work in the Communications Office.
For S. Patrice, there is no typical day. Some days will consist of fulfilling her duties as a package deliverer, others will blend her work with the Post Office with her work in the Communications Office. The one constant that each day carries is a common theme of helping the Sisters of her Congregation stay involved and included in the Community. “I go where I’m needed,” she says, “I’m not one to sit and twiddle my thumbs.”

Her current focus is her commitment to keeping her fellow Sisters included in the Community after their retirement. She says, “All of the things I’m doing now were asked of me by the other Sisters.” She keeps the Sisters involved and informed by delivering copies of Update and Intercom to the residents of the Motherhouse.
Sister states that she takes such involvement in the Community because it maintains the “loving relationships” that have been built and responds to the mission of the Sisters of Charity. By helping the Sisters through her service, she has developed a deep and enriching relationship with God by witnessing Him in others. Sister commented that her relationship with God is nourished by a dedicated and prayerful life, but would be incomplete without her service to others. “I’m a Sister,” she says, “To separate my life from my service would be like cutting my arm off!”

“Be of service to others” is a motto that S. Patrice has continued to live by since her retirement from active ministry. Like a modern Good Samaritan, S. Patrice provides an example of how the smallest undertakings can lead to larger benefits through her service to the Sisters and the common good.