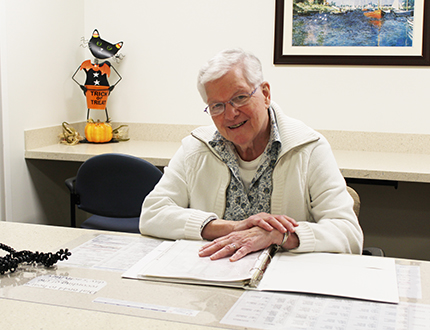 “I’ve never not wanted to be a Sister,” says Sister of Charity Jo Ann Martini. “Not for one moment.” In 1959, she joined the Congregation right out of high school and has never doubted that inner calling.

In elementary and high school, S. Jo Ann was taught by Sisters who were full of spirit and life. Not only did they influence her call, but they inspired Sister to become a teacher herself. When she was 10 years old, S. Jo Ann had been diagnosed with a benign brain tumor. While in the hospital, she realized that she had a great love of caring for others, especially children. “It could have turned out differently,” she says, “but I was fortunate to survive.” This realization carried through to her active ministry in education.

S. Jo Ann’s first assignment was teaching at St. Charles elementary school in Lima, Ohio, where her love of children and seeing their progress in learning came to fruition. “Teachers are not made,” she says, “they are born.” She went on to teach in various schools across the country, including a public school in Waynesboro, Georgia (1981-’83), where she was blessed to work with many people who were not Catholic but had a desire to learn about God and prayer.

For nine years (1983-’92), Sister taught at St. John the Baptist school in Harrison, Ohio. Although she says all of her teaching experiences were amazing, one of her most proud memories involves one outstanding student who did not have much at home, but was able to get a full scholarship to attend a Catholic high school and eventually went on to Harvard.

In 1991, Sister became a director of religious education, finishing a master’s degree in pastoral studies from Loyola University in Chicago, Illinois. Two years later, she began serving as the director of religious education for the elementary students at St. John the Baptist, where she prepared the students for the sacraments of First Eucharist and Confirmation. “It’s a challenge to instill a deeper meaning in our faith journey, commitment to Christ and the call to service for students today.”

In 2012, Sister was forced to retire as her health declined, but her service continued. Currently, she enjoys volunteering at Roberts Academy (Cincinnati) where she tutors the sixth graders, and at St. John the Baptist, where she tutors the first graders. In addition, Sister volunteers at the Front Desk of Mother Margaret Hall, the Sisters of Charity nursing facility at Mount St. Joseph.

When not volunteering S. Jo Ann enjoys collecting stamps, walking and gardening. “You can’t say no to God’s calling,” says S. Jo Ann. “My calling is my love for teaching children. It’s in my heart.”