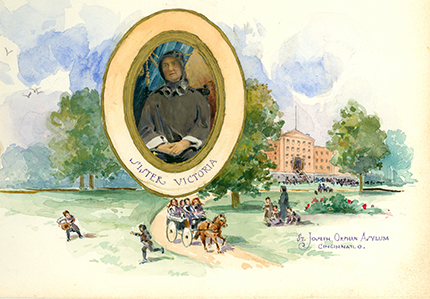 On Aug. 7 of this year family, friends and Community members gathered for a grand celebration at Mount St. Joseph to recognize those Sisters who were marking their golden jubilee – 50 years as a Sister of Charity. Just as we gather each year to celebrate those who have reached this milestone, Feb. 2, 1862, was the occasion for many to gather for Mother Margaret George’s golden jubilee. In her case the celebration was held at St. Joseph’s Orphanage in Cumminsville where Margaret was superior of the 19 Sisters as well as the president, treasurer and bookkeeper of the asylum that at the time was home to 350 children. 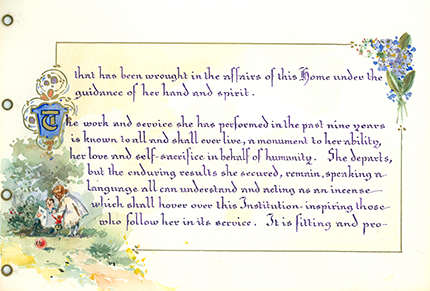 As we might expect in the mid-19th century Victorian era, celebrations were a bit more ornate than those we have today. In the instance of Margaret George’s jubilee, her status as companion to Elizabeth Seton in the founding of the Sisters of Charity in the United States, and as founding mother of a new congregation of Sisters of Charity in Cincinnati, added to the distinction of the occasion. The Catholic Telegraph noted the jubilee with a lengthy tribute to the honoree the week before her celebration, and the following week, an equally lengthy and detailed account of the happenings of the day.

Sisters and students at Mount St. Vincent were stirring quite early on what we may assume was a frosty Feb. 2. Mary McCann, then one of the Cedar Grove students and later S. Mary Agnes, provided a description of the happenings.

“In those days bonnets and shawls were a luxury,” she wrote, “accordingly, only those who could be properly appareled took the historic ‘Warsaw ‘Bus.’ The rest, with many-colored shawls and headgears of every and any style, were stored away in the ‘big wagon’ and began the descent of the old Warsaw Pike long before the sun sent a ray to lighten the eastern hills.”

At the same time the Sisters from St. John’s Hospital walked from their home at Third and Plum streets in downtown. All arrived in time for a 6:30 a.m. Mass sung by Archbishop John Purcell. 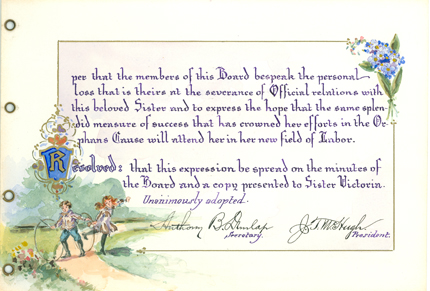 r in the morning many gathered to celebrate with Mother Margaret. A committee consisting of the alumni of St. Aloysius Asylum, members of the St. Peter, St. Joseph, St. Xavier and St. Aloysius Orphan Societies of Cincinnati and the St. John Orphan Society of Covington arrived at St. Joseph’s in Cumminsville at 10:30 a.m. to congratulate the jubilarian. After lunch, before the older orphans left for an outing to the city, a little orphan boy, John Weir, read a lengthy tribute verse that began:

“Happy hearts and happy faces
Cluster round their Mother’s knee,
While their prayers are begging graces
For her golden jubilee.”

The following morning Archbishop Purcell, who had been unable to attend all of the festivities on Sunday, made an early visit. Again the Sisters and the students from Cedar Grove were in attendance. Of special note on this occasion was the “Address of the Sisterhood to Mother Margaret on her golden jubilee.” It contained the “greetings of devoted love,” referring to Margaret as the “second mother of their hearts” and “the guardian of their early years.”

The themes that appear in this poem cover the span of Margaret’s long life, identifying why she should “be given the reward of her labors.” The verses speak of her ties to Elizabeth Seton and Simon Bruté, to St. Joseph’s Vale and St. Mary’s Mountain. They speak of how she gave her all to God, knowing that it would involve sacrifice and suffering. They celebrated her courage in working in the “Virgin Vineyards in the West,” her service to the poor and the orphan, and her commitment in “following Christ through ways that Vincent trod.” The poem offers the image of “her life a polar star – to be shed on future years afar.”

Selected verses from this poetic tribute from her Sisters indicate the gift they felt she was to them – her life like a polar star.

She knelt; within her breast was Mary’s child,
She gave herself to God by sacred ties,
And He looked down and blessed her as He smiled
Love’s fond approval on her sacrifice.

At Mother Seton’s side in days of old,
The little seed was sown, by black-robed maiden;
And now, with golden fruit, a hundred fold,
She stands amidst her children richly laden.

Who can forget thee, dear old home! that ever
Knelt at St. Joseph’s shrine to pray?
What time or scenes the cherished ties can sever
That bind our hearts to Seton and Bruté!

Thou sawest with the Magi’s faith arise
A burning star that lured thee from the nest
Far on the wings of love to sunset skies,
To thy Lord’s virgin-vineyards in the West.

And thou didst come, the poor, the orphan found
In thy large soul a balm for every ill;
No voice of agony could ever sound,
But made thy mother-heart responsive trill.

But more than these, St. Vincent’s Daughters owe
A debt of love and gratitude to thee,
A debt that none can pay save He alone
Who smiles from Heaven upon thy Jubilee.

Oh, dearest Mother, ‘tis a blessed thing,
To follow Christ through ways that Vincent trod;
To feel our Father nerve our drooping wing,
And bear his children to the feet of God.

Thy life has been to us a polar star,
Through the dark midnight o’er the stormy sea;
Oh, may it shed o’er future years afar
The radiance of its golden jubilee.

“Mother Margaret tried to kneel before the coronation and blessing, but His Grace raised her to her feet and imparted to her the blessing of Holy Church and that of his own heart. All were in tears when the Archbishop turned to speak a few words of fatherly advice, called forth by the thought of a half-century of well-filled years.”