Bridget and Margaret – Mother and Daughter: Ties That Bind

Mother-daughter bonds are among the strongest and most influential in women’s lives. In most cases familial ties mature into adult relationships that endure to the grave and beyond. We hear our mothers’ voices instructing, guiding, encouraging, admonishing, soothing our fears, supporting us in times of trial, and loving unconditionally. 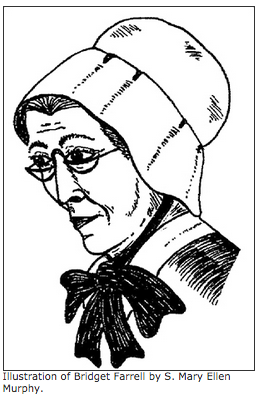 Such was the relationship that existed between Bridget Farrell and Margaret Farrell George. Whatever close ties existed between these two women were, by the very circumstances of their lives, forged and strengthened by the events and choices which set their course. With Margaret still a young child, they left their Ireland home, embarked on a dangerous sea crossing, and set roots in a distant land – Virginia. Their lives were soon stricken with tragedy when the rest of the family succumbed in an epidemic. Having only each other, they made their way together.

Moving to Baltimore, Md., they built friendships among fellow immigrants, members of their church, and residents of their neighborhood. Bridget ran a shop; Margaret went to school. As the years passed, Margaret met and married a young professor at St. Mary’s College. Within 15 months he and their newborn daughter were dead. Once again mother and daughter were left bereft by the death of loved ones. Once again they started their life anew.

Their next move was to Emmitsburg, Md., where they continued their journey together as Sisters of Charity. They shared the joy of knowing Elizabeth Seton, her daughters, sisters-in-law, and the first Sisters in Baltimore. Now Bridget and Margaret would join this group in their sacred mission of serving God’s people. Together they prayed, walked the grounds of their beautiful valley, mentored the students at St. Joseph’s, and cherished their shared commitment.

How did this lifetime together affect these women? What lessons did Margaret learn at her mother’s knee? What qualities characterized their approach to life? In an 1852 letter, Elizabeth Boyle, one of the founding members of the Sisters of Charity, observed, “[Margaret] looks more like her dear mother than ever.”

I believe the similarities between the two ran far deeper than looks. Three qualities in particular stand out in both of their lives – they were courageous, faith-filled and warmly loving.

Who can estimate the courage it would take to uproot a family, including small children, and start anew; to face this new world as a young single parent; to establish yourself in a small business? Yet, Bridget did these things and built a life for herself and her daughter. A woman of buoyant spirit, she was open to what the world offered. She assimilated into the city-life of Baltimore and the church-life of the Catholic community. She grew in her spirituality through friendship with the Sulpician priests, especially the Rev. Pierre Babade, and welcomed the expansion of her family with her daughter’s marriage. As circumstances changed, she was willing to move to Emmitsburg where, at the age of 48, Bridget joined the Sisters of Charity. Elizabeth Seton described to Bishop Carroll, “You would be delighted to see Mrs. Farrell going humbly among the novices to learn her catechism of Sister Kitty – she begged to be admitted as the greatest favor.”

Margaret learned this approach to life well. Overcoming the loss of her husband and child, she too embarked on a new life as a Sister of Charity. She was a pioneer educator, opening schools in both Frederick, Md., and Richmond, Va., where she and her companions met with extreme poverty and anti-Catholicism. Speaking of the physical hardships in Frederick, she wrote to Mother Rose White, “What a contrast to home! – But – never did I feel like a Sister of Charity, who made a vow of poverty before last Thursday night.” Of the anti-Catholic climate in Richmond she wrote, “I am an old missioner and my sisters, tho’ young, are not wanting in courage.” Of her greatest act of courage, her 1852 decision to break ties with her Emmitsburg motherhouse and join a new community, Margaret wrote little. Her actions, however, speak louder than any journal entry.

There are many examples of both Bridget’s and Margaret’s faith-filled approach to life. Elizabeth Seton wrote of Bridget, “her prayers pierced the clouds … she is sometimes the children’s angel, and an angel indeed.” There are amusing anecdotes included in several of Elizabeth’s letters that testify to Bridget’s simple and trusting faith. Always open about her mistakes and foibles, she once said to Elizabeth, “I would rather give all up to my God and forget it!”

Following suit, Margaret too was a woman of faith. In her journals she frequently interspersed phrases such as “GOD IS ALL” and “LOOK TO GOD ALONE” as she recorded events or her responses to them. Her attitude of trust is exemplified in her Richmond Journal where she writes, “God is my Father, let Him do with me what he pleases. All is the same to me since He will not forsake me.” When writing to Cecilia O’Conway about the possibility of a new mission, she told her, “I am ready, for my disposition is to go and come as Superiors may see best.”

Each of these women also possessed a warm and loving approach to life. S. Bridget had a witty and spontaneous personality. A joyful person, she brought delight to those around her. Elizabeth loved her Irish simplicity and promptly dubbed her “Ma” Farrell, remarking, “She makes us laugh until we cry.” The young people who surrounded her at Emmitsburg loved her dearly and she returned their affection. She asked Elizabeth to include greetings in letters to her son William such as, “I think of William now as if he was my Peter,” and “I remember him daily as I wake.” There are stories of students going barefoot to her room at night for a visit, and of her spur-of-the-moment injections of Irish practices and witticisms. When students, long gone from St. Joseph’s, wrote they asked to be remembered to their “grandmamma.”

Although less witty than her mother, Margaret too warmly embraced others. One Sister remembered her as generous and kindhearted, rising at three in the morning to build the fires so the house would be comfortable when the others got up. Elizabeth wrote to her friend Catherine Dupleix that Margaret was “as good as she was gifted – always delighted to help anyone.” In her own correspondence, Margaret often makes reference to sitting up into the night with sick students. Frequent references in correspondence attest to the fact that she was dearly loved by the children she taught and cared for. Parents wrote thanking her for her affection for their daughters, while students wrote after they left St. Joseph’s telling her, “None can send you more love than me,” and “Dearest Sister Margaret – it has ever been the same toward you and St. Joseph’s.”

Mother and daughter – mutual love, binding ties, shared lives. As Sisters of Charity these two women not only cast their lots together but gifted us with a double portion of their blessed spirits.