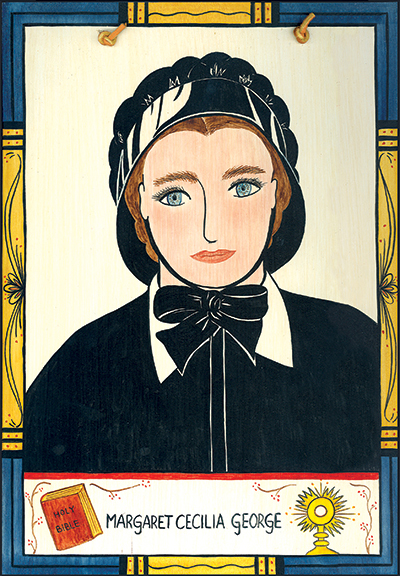 The santo of Margaret Cecilia George, the founding mother of the Sisters of Charity of Cincinnati, was created by S. Roberta Westrick in honor of the 150th anniversary of the Community in 2002.

The qualities of leadership that Margaret modeled during her years in Cincinnati, Ohio, formed the foundation for the mission of the Sisters of Charity of Cincinnati. The following article, taken from a presentation given by Virginia Wiltse in January 2009, provides examples of Margaret’s leadership style, which still teach us today.

1. Margaret focused on mission. At the age of 59, Margaret George arrived in Cincinnati in 1845 to take over as director of St. Peter’s Orphan Asylum and School. Small in stature, Margaret was as intelligent as she was warm and gentle. She was devoted to the memory of her friend Elizabeth Seton, and unshakable in her commitment to meeting the needs of the American Church as outlined by Elizabeth’s rule for her Sisters.

2. Margaret believed that leadership requires personal sacrifice. In 1845, as priests and bishops gathered in Cincinnati for the dedication of the new German Church of St. John the Baptist, a Sister and a few of the orphans inside St. Peter’s Orphan Asylum were ill. Instead of celebrating with the dignitaries, Margaret stayed behind to care for the children and her friend, S. Eleazar Harvey.

3. Margaret developed relationships that enriched her life and supported her ministry. In 1846, after successfully concluding her first major fundraiser, which raised $1,640 to support the orphanage, Margaret wrote thank you notes to her donors. She often invited Bishop John Purcell to the orphanage and school, making sure he was welcomed by the students. Their friendship enabled her to engage the support of visiting dignitaries. They preached charity sermons at the Cathedral to help her raise money for the orphanage.

4. Margaret understood the power of a positive public image. She once wrote to a friend, “Our children – such as they are able – go to the Cathedral twice every Sunday. This keeps them before the public who love to see them and encourages them to contribute to their support.” Margaret’s students were always well behaved, and their excursions were often covered in local newspapers.

5. Margaret knew that leadership is about service and not self. Margaret was the first to rise every morning. She would go from room to room building the fires in the kitchen and classrooms, knowing the house would be much more comfortable when the others arose. She genuinely cared about the comfort and feelings of others.

6. Margaret advocated for what she believed in and was undaunted by challenge. In March 1850 Margaret told Bishop Purcell that she and the others had received word from their superiors in Emmitsburg, Md., that their vows were being transferred to a French religious community. They were instructed to pronounce the new vows or be cast out of religious life. To Margaret, this violated her most basic commitment to the mission of Elizabeth Seton – service that is adaptable to the unique needs of the American Church. She challenged the authority of her superiors, and asked the bishop to intervene. Margaret refused to repeat the new vows.

During the summer of 1853, Margaret purchased a piece of property on Lehmann Road in Price Hill (Cincinnati) where Mount St. Vincent Academy was opened.

7. Margaret respected opinions that differed from her own even when this made her own task more difficult.In October 1851 Margaret returned to Cincinnati after a long, difficult journey from Emmitsburg. She carried with her the paperwork that every Sister must sign to remain in the Community. Margaret knew that some Sisters were eager to sign; they did not understand her objections. Cincinnati was the only mission that resisted incorporation into the French community. Rather than call for a vote that would divide the household, Margaret gave each Sister the right to petition for membership on her own.

8. Margaret knew leadership requires risk. On March 25, 1852, Margaret and five other Sisters kneeled before then Archbishop Purcell to make vows as Sisters of Charity of Cincinnati. The archbishop offered the Sisters the option of forming a diocesan community that would continue to serve the American Church under the constitutions of Elizabeth Seton. The Sisters were acknowledged as disobedient by the superiors at Emmitsburg and all contact with them was forbidden. Margaret was 65 years old at the time, and was chosen as the first Mother.

During the summer of 1853, Margaret purchased a piece of property on Lehmann Road in Price Hill (Cincinnati) where Mount St. Vincent Academy was opened.

9. Margaret knew leadership requires vision. During the summer of 1853, Margaret purchased a piece of property on Lehmann Road in Price Hill (Cincinnati) where Mount St. Vincent Academy was opened. Additional property was purchased in downtown Cincinnati where another academy was opened. In 1856 she proposed to Archbishop Purcell that the community trade the two properties for the 33-acre estate on what is known today as Glenway Avenue in Price Hill. In March 1857 Margaret and a few other Sisters moved to the property; a few months later, she broke ground on a five-story school building that would house, first, Mount St. Vincent Academy, and then Seton High School. That property also included the grounds on which Elder High School now stands.

10. Margaret’s example inspired loyalty and leadership in others.After suffering a stroke, Margaret spent her final years on the grounds of what is now known as Seton High School. She was confined to a wheelchair. Sisters, students and seminarians would visit to talk with her, listen to her stories, and to learn from her example.

Margaret died Nov. 12, 1868. She was the last survivor of a small band of devoted and heroic women. More than 140 years after her death, there is still much to learn from Mother Margaret George and her passionate allegiance to Elizabeth Seton, her deep trust in God, and her admirable leadership skills.

The above scenes were created from citations in “Sister Margaret Cecilia George: A Biography,” written by S. Judith Metz, SC and Virginia Wiltse (Cincinnati: Sisters of Charity of Cincinnati, 1989).