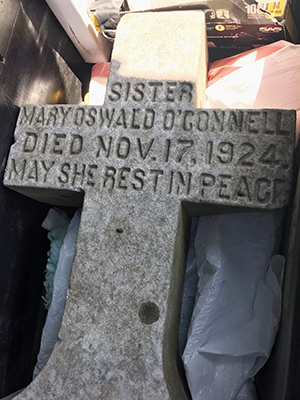 In April 2018, the Cincinnati Archdiocesan Office for Consecrated Life received a unique call from the Clermont County Sherriff’s Department. A grave marker for a S. Mary Oswald O’Connell appeared on the side of Clermont County Road and was rescued by the department in the hopes of returning it to its proper community and resting place. Given the area, it was quickly assumed that the marker was from the Ursulines of Brown County’s cemetery. Once they confirmed that the Sister did not belong to their community, the question was sent to all of the communities in the area.

When S. Joan Cook, Sisters of Charity president, forwarded the request to the Archives, the team soon discovered that S. Mary Oswald was a Sister of Charity of Cincinnati and that she was buried in Section A of the Mount St. Joseph Cemetery. S. Sheila Gallagher and Archivist Veronica Buchanan traveled out to confirm if her marker was missing from the cemetery. This is where the story veers into a deeper mystery for the Community. S. Mary Oswald’s marker was still in place, but it was revealed through this inquiry that nearly every marker in Section A had been replaced at some point. The marker discovered on the side of the road was S. Mary Oswald’s original marker. After consulting minutes, financial records, and the cemetery and grounds collections, no documentation could be found that described when this changeover took place. From the photograph collection and with the assistance of the Communications Office, the timeline for the transition was narrowed as falling between 1987 and 2006.

S. Phyllis Kemper, OSU, returned S. Mary Oswald’s original marker to the Motherhouse in June 2018 where it is currently on display in the McCann Room. This is one of only a few remaining examples of the markers that were initially used at Mount St. Joseph Cemetery. 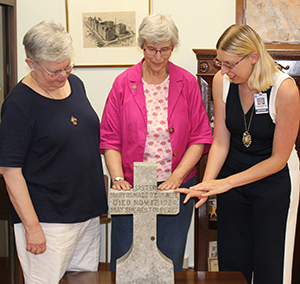 This request has also led to some introspection into S. Mary Oswald’s life and ministry. Born Bridget O’Connell in Ireland in 1873, she immigrated to the United States at a very young age and the family eventually settled in Lima, Ohio. Correspondence in her file suggests that she was potentially the first vocation from St. Rose Parish in Lima to enter religious life. From the painstaking research of S. Sheila Gallagher, a near complete picture of her ministries has come to light. Following the Novitiate, S. Mary Oswald was initially stationed at St. Joseph Orphanage in 1892 before being transferred to St. Xavier Boy’s School. From there, she taught in schools in Middletown, Greenville, and Cleveland, Ohio. According to an obituary that was published in the Mother Seton Journal, Sister was missioned to Mount St. Vincent Academy in 1919, where she spent five years endearing herself “not only to those fortunate enough to have been her pupils, but also to those who knew her only as a cheery presence.”

“Her religious life was devoted to teaching, in which profession, her clearness and directness of exposition, her patience, impartiality, unfailing kindness, encouragement and inspiration won the respect, confidence and love of her pupils and their parents.” 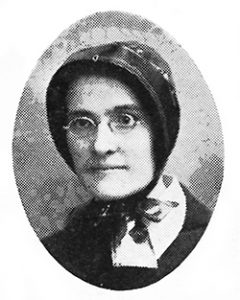 It is unclear which school she was missioned to in 1924 in Cleveland (Holy Name or St. Bridget), but after a six-week illness, S. Mary Oswald passed away at St. Vincent Hospital in Cleveland on Nov. 17, 1924. At her funeral at the Mount St. Joseph Motherhouse, her brother, Rev. Patrick J. O’Connell, Chancellor of Cleveland at the time, celebrated the Memorial Mass. In addition, 14 other priests from the diocese attended the funeral along with many of her former students.

Reflecting on the return of the marker that was solemnly placed nearly 94 years ago, we hope that S. Mary Oswald will serve as a blessed beacon of inspiration for our Charity Family.