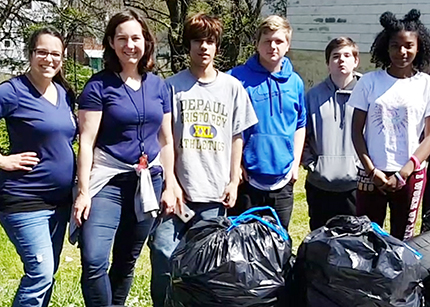 For the past five years, DePaul Cristo Rey High School (DPCR), a Sisters of Charity sponsored ministry in Cincinnati, Ohio, has been pursuing the idea of a project that would not only engage students, but challenge and inspire them. This year, the Bruin Movement Project was created, and the outcome was remarkable and impactful to the teachers, students, and Greater Cincinnati community.

Jessica Ebert, DPCR freshman Religion teacher, was desperate for a project that her students could grasp onto and run with; something that would provide service to others and make them feel as if they could make a difference in the world. The initial project started out with the first class at the high school, the Class of 2015. As sophomores, they were required to take the Ohio Graduation Test, a standardized test students had to pass to graduate. Out of the entire class, the top four scores were from students who were failing multiple classes. According to Ebert, that meant the teachers were doing something wrong, so she decided to make a change. Having to follow the state curriculum and the Cristo Rey Network curriculum, Ebert said that, “There can be a lot of pressure to make sure students perform well on the test, but sometimes what gets lost is the joy and energy that should come from learning. It becomes drudgery.” 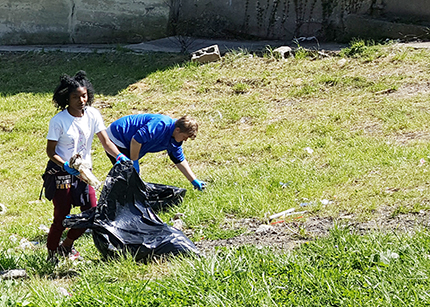 In 2015, Ebert created The Virtues Project, a semester-long project for sophomores and juniors, where students chose a virtue to focus on and developed a project that connected their Religion, English, and History classes. After students voiced their issues with the project, Ebert was determined to try again the next year, with a new and improved project. The next project was called The Humanities Project, and was a yearlong project focusing on the seven themes of Catholic Social Teaching. Like the first, students thought the project felt like added academic work and were not energized for it. “Their dissatisfaction pushed me to keep working,” Ebert said, “To keep looking for what would work.”

Two years ago, Ebert teamed up with DePaul Cristo Rey media specialist, Nancy Schroeder, and the sophomore Religion and English teachers to make the project “real.” They came up with a competition for a sophomore service project, one that would fund the most organized and passionate project. Although the students were more excited, some didn’t try because they had no confidence that they would win. In order to be successful, they decided the project would need more time and energy.

This year, the Bruin Movement Project soared. After applying for a SC Ministry Foundation grant and a grant from the Mayerson Foundation, the 93 students in the freshman class got in groups of four or less to design, pitch, and implement a service project that would be funded through the grants. As freshman Religion teacher, Ebert was in charge and dedicated an entire semester to guide the project. This project is very dear to Ebert’s heart, because for the first time in five years, the student finished the year with, as she said, “A sense of ‘I did this,’ and a sense of, ‘I can make changes to the world around me.’ Really, I wanted them to see themselves in a new way—as members of a community who can impact it.” 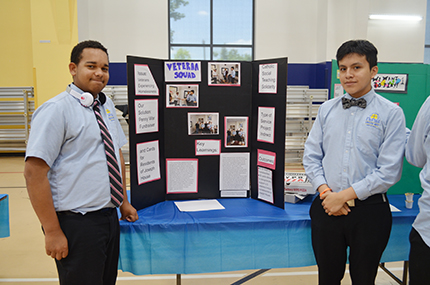 DePaul Cristo Rey High School freshman students give their Bruin Movement Project presentations at the school symposium in May.

Sister of Charity Mary Marcel Dejonckheere, a volunteer at DePaul Cristo Rey, was especially excited about the Bruin Movement Project because it captures the school’s spirit – to show compassion for others. At the end of the year, a fair was held where the students presented their projects. She was amazed at how creative they were and said, “I got an overwhelming feeling that the students were amazed they could accomplish so much. The whole exhibit space was holy ground.”

Throughout the semester, Ebert and DPCR teachers were excited about the possibility that this project could have an outstanding outcome. Her committed partner, Nancy Schroeder, said, “Any time you can provide students with real, meaningful learning experiences, I truly believe they will walk away having internalized the skills they learned.” Annie Reilly, the freshman Reading teacher, also helped spearhead the project, and after years of learning, planning, and refining, 46 projects were ultimately funded. The results of these projects, “Really energized the community,” and “Brought students together,” according to Ebert. But most of all, the Bruin Movement was very beneficial to the students. Ebert said, “So many of them really did see themselves with a sense of wonder—they were surprised, proud, and pleased with what they accomplished.” They also greatly impacted the organizations they worked with and S. Marcel had the feeling that students wanted to continue their service.

Both Ebert and S. Marcel were touched by how creative and thoughtful some of the projects were. S. Marcel loved many projects, but was particularly impressed with the project in which a student passed out seedlings of forget me nots, each one representing 10 children killed from violence. She also loved the project group who got a team together to clean up some streets in Price Hill, a Cincinnati neighborhood. Her favorite, however, was the group who made a coloring book of superhero stories where the heroes intervened when people were being pressured to try drugs. They took the books to a library and read them to children.

Ebert, on the other hand, loved the project in which a fundraiser was held and 30 care packages of toiletries were created for Shelter House, and the Safe Pastures project, which helped redesign the website for a woman who runs a home for young women who age out of the foster care system. She also enjoyed the creativity of one student who took over science classes for a day and taught her classmates about the benefits of organic produce and the group who built and decorated a Buddy Bench for Dater Montessori (Cincinnati), a bench to promote inclusion and friendships in schools.

Overall, 4,340 service hours were completed for the Bruin Movement Project, and the empowerment and dedication put into it will never cease to amaze.