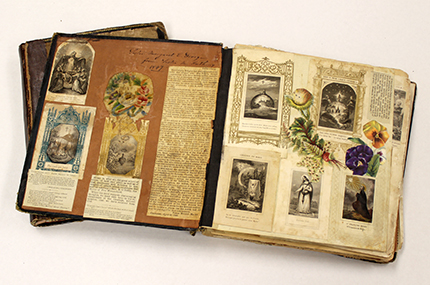 Mother Margaret George, the founding mother of the Sisters of Charity of Cincinnati, placed great value on preserving history. She kept chronicles and journals, such as her Diary of St. Joseph’s and Treasurer’s Book, that are priceless records documenting the early history of the Sisters of Charity. She also wrote of her own personal experiences in accounts such as her Frederick Journal and Richmond Journal. Beyond these records, she made time to collect poems, newspaper clippings, printed sketches and drawings, inspirational quotes and other items that were connected with her own experiences.

For centuries avid readers kept “commonplace” books in which they copied material for re-reading and further reflection. For instance, we have several examples of “notebooks” kept by Elizabeth Seton of personally meaningful events, original reflections, quotes from spiritual writers, and retreat notes. As the 19th century progressed and printed materials became more readily available – the one-cent newspaper debuted in 1833 – people felt they were on “overload” trying to keep up. In response, a practice began of clipping or copying articles, quotes, poems, and pictures that they found meaningful, and placing them in what came to be called “scrapbooks.” Noted author Louisa May Alcott felt that “the habit of reading with a pair of scissors in my hand has stood me in good stead for much of my literary work.”

Mother Margaret George was part of this movement. Our Archives holds three “scrapbooks” she compiled between the early 1840s and her death in 1868. The earliest, dated 1841, is for the most part handwritten copied material, but it also contains original pieces such as poems commemorating Elizabeth Seton and her own mother, Bridget Farrell. Notations of special events or visitors, and information about her missions in Emmitsburg, Boston, and Cincinnati are also included. Fifteen pages are taken up with a handwritten piece, “The Language of Flowers,” a comprehensive list of flowers and their symbolism, something obviously interesting to her.

The other two “scrapbooks” contain a preponderance of clippings and sketches from newspapers about people and places meaningful to Margaret, religious and inspirational stories and quotations as well as holy cards and humorous anecdotes. Also included are orphans’ and students’ addresses given for distinguished guests, and stories about bishops and others who were meaningful figures in the Catholic Church. In the case of handwritten materials in all of these books, it is sometimes difficult to distinguish what is original and what is copied. One thing is certain however, the contents of these books offer insights into what the keeper of these books considered important, of value to ponder, and worthy of preservation.