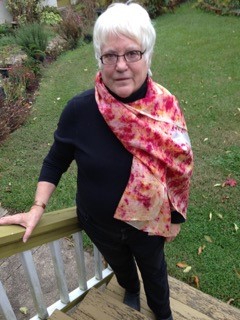 Associate Regional Representative, Pam Korte, made her commitment as an Associate in Mission in 2015.

“This feels like a blessed time of life to walk an intentionally deeper spiritual path,” says Regional Associate Representative, Pam Korte. For the past 37 years, Pam has lived with her husband and raised two sons in Madisonville, an eastside neighborhood in Cincinnati, Ohio. She is part of a group of three Associates of the Sisters of Charity of Cincinnati that serve in the Greater Cincinnati, Northern Kentucky area.

Pam first became acquainted with the Sisters of Charity when she attended the College of Mount St. Joseph (Cincinnati) from 1968-1972 and was mentored by S. Augusta Zimmer, S. Ann Austin Mooney, and S. Loretto Ann McCarty. These Sisters fostered her passion for art and she went on to receive a master’s degree in fine arts from the University of Louisville. Pam became a professor at Mount St. Joseph University and was mentored by many Sisters of Charity through her 30-year career. This generosity led Pam to become an Associate, making her commitment in June 2015. She says, “The process only increased my awareness of brave women who perceive and serve the needs of God’s people.”

Pam lives out the mission of the Sisters of Charity through daily prayer and caring for all of God’s creation. She finds that her skills of listening and encouraging students serve her well in a world where everyone should be encouraged to dream and love. She stays connected to the Sisters of Charity by participating in the many socials sponsored by the Associates for the Sisters. Pam is also involved in organizing an art show in Studio San Giuseppe at Mount St. Joseph University that will highlight, in part, the ministry of the Sisters of Charity at EarthConnection. A special piece of Pam’s art was given to Leadership at the last Chapter election and her papier-mâché globe was used in the Congregational Retreat.

For 38 years, Pam has maintained a ceramic studio called Korte Pottery. She continues to create porcelain art pieces and loves to read books of all genres. Currently, Pam is working on a series of essays about objects and people, titled, Museum of the Heart. 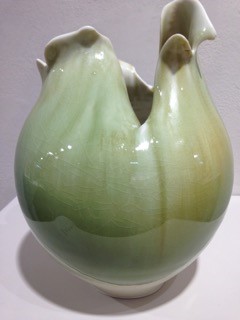 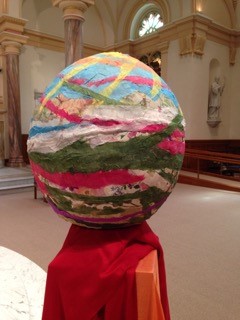 The Cosmic Globe, displayed in the Motherhouse chapel, was made by Regional Representative, Pam Korte, for the Congregational Retreat.