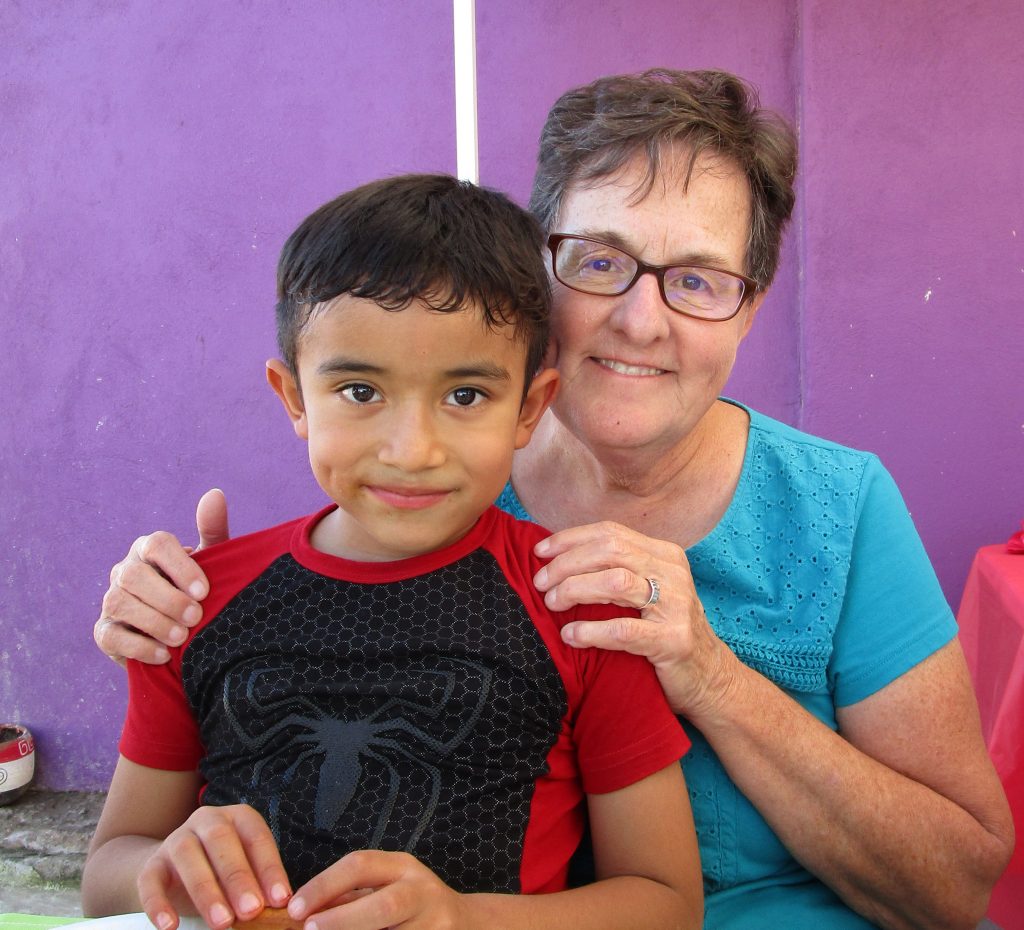 S. Peggy Deneweth says the children at the clinic teach her every single day.

Throughout our Community’s history, Sisters of Charity have dared to risk a caring response, traveling to the unknown in hopes of meeting the needs as they were presented. Elizabeth Seton, Margaret George, Blandina Segale, all relied on their strength in God to share the journey with their brothers and sisters.

Similarly, Sisters Peggy Deneweth, Janet Gildea and Carol Wirtz have been ministering at the U.S./Mexico border for more than 25 years. In fact, as the three explain it, what brought them to Anthony, New Mexico, was unknown, but they knew the Spirit would guide them.
“In 1991, a group of us started to think about starting an intentional community that would be based on the newly crafted Vision Statement,” explained S. Janet.

“We did not necessarily have a ministry in mind, but we knew we would determine that when we got there. We felt that the border would be a place where there would always be fresh needs with new arriving immigrants and refugees.”

They were first called to San Vicente Clinic in El Paso, Texas, where S. Janet was medical director, S. Peggy served as assistant nursing director, and S. Carol was doing alternative therapies. In 1994, after an administration shift, the three had resigned and were drawn to start their own clinic, La Clinica Guadalupana, in the desert colonias of El Paso. Spanish for neighborhoods, the colonias could be described as makeshift communities of trailers and shacks, with off-and-on electricity and running water. Residents were poor and living in third-world health conditions. The need was there. 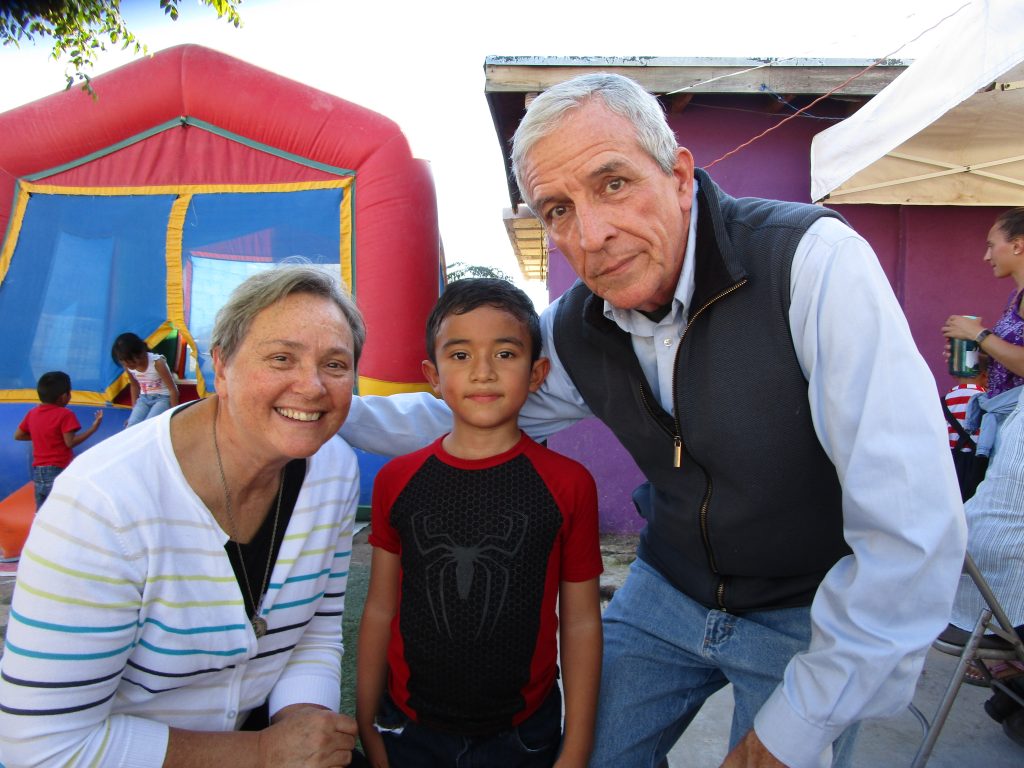 “We live like there isn’t a border,” says S. Janet Gildea, pictured with Fr. Bill Morton, a Sisters of Charity Associate in Mission.

“We didn’t know anything, we didn’t have a business background, we didn’t have funding,” said S. Peggy, and yet the Spirit continued to lead them. The late S. Mary Assunta Stang, administrator of the Seton Enablement Fund at the time, visited the area and upon leaving told them, “Not only should you do this, you must do this, and you can do this.” And with that, Sisters Janet and Peggy secured the funding, found the land for a location, met with the lawyers to write the bylaws to become a nonprofit, received hours upon hours of donated materials and labor to build the clinic, and eventually opened its doors. And the people came. Within six months, they were expanding.

For 13 years, the Sisters ministered at the clinic, providing basic and preventive health care. During this time the women also became acquainted with Fr. Bill Morton, who asked S. Janet to take a look at a neighbor of his who had received a burn wound. What started out as one patient quickly developed into many, and eventually they were treating crowds of patients out of Fr. Bill’s home in Anapra, Mexico,
a desert colonia on the outskirts of Juarez.

Once again the needs presented themselves, and the Sisters found funding from the SC Ministry Foundation to build a clinic to offer family medicine on the corner of Fr. Bill’s house lot. A turning point came, however, when they met Gloria, a 41-year-old woman six months pregnant. After multiple visits, Gloria one day arrived with a newborn who was severely affected with Down syndrome. S. Carol immediately started working with Gloria, teaching her early infant stimulation and helping her to become an advocate for her child. Gloria also became an advocate for the Sisters, telling others with special needs children to go visit them. And again they came; one after the other.

“We went home,” said S. Carol “and asked what is God asking of us now? Maybe we just need to focus on special needs children.”
Laughing, the three Sisters said they were the most unlikely group of missionaries, but when they came together with their variety of strengths and skills, they were responding to a new need. Since 2003, the Sisters have crossed the border three times a week to offer their services. Proyecto Santo Niño, the Child Jesus, as it became named, specializes in providing physical therapy to poor families with special needs children, those often underserved by Mexican health services. Today, the clinic consistently serves an average of 20 families, but there can be up to 35-40.

One of the most important components to come from the clinic is teaching the parents, mostly mothers, to perform the therapies. “We realized that the moms weren’t afraid to touch the kids,” explained S. Janet, “they were the best primary therapists, and since, that’s been our model – to train the moms to work with their own children.” 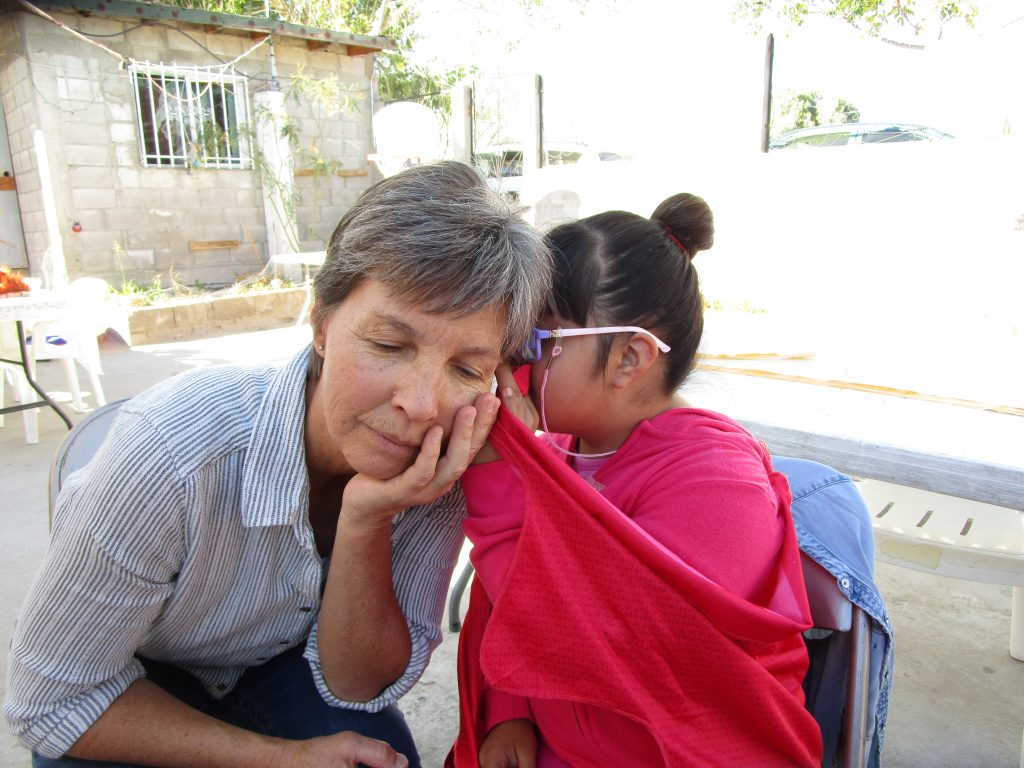 Over the years since Proyecto Santo Niño was established, S. Carol Wirtz has developed meaningful and lasting relationships with the children and their families.

And while the clinic intended to help children with special needs, it became so much more for the families. They discovered that the mothers longed for a sense of community, to find others who were raising a special child in desperate poverty. Their worries and fears for their children were eased as they learned to lean on each other for support and to feel accepted.

“When they come to the clinic for the first time, they are waiting to see our response, how we will react,” says S. Carol. “You can see this relief in their faces because every time a new child arrives everyone rejoices. There aren’t words. It’s a powerful experience.”

“These moms are some of the most courageous women I know,” said S. Janet. “Their capacity to care for children, who can’t give the normal feedback to a parent, they aren’t affectionate, many are nonverbal; they are just the most faithful and courageous woman – and patient.”

Not only did the mothers find a place where they felt welcome and empowered, but so did the siblings of the children. The clinic evolved to help those children as well, adding teachers to work with them on their school studies. In addition, a religious education program has been initiated for the children, and parents and siblings have also participated.

Being open and letting the need present itself, has been their motto from the initial decision to minister at the border. “You have to be ready to go where you are being pulled,” said S. Peggy. “Even in the transition with Guadalupana, and especially at Santo Niño, what I have learned is we don’t know what the next step is, the next step takes us. We can’t hold on to anything, it’s very important for it not to be mine or ours. Whatever the next thing is, we will be ready to let go of one thing to go on to the next.”

Sisters Carol, Peggy and Janet realize the importance of Pope Francis’ call to walk with our brothers and sisters, to treat them with respect and dignity, to offer them love and to share in their journey. Santo Niño provides families, especially the children, with a warm and safe place, a place of joy and acceptance, a place where they belong and find hope.

“They teach me every single day,” said S. Peggy, “they are the ones that have showed me what life is about. Even when I work with the kids I think what a privilege it is to be here. These children are God himself. That’s what they are here for.”