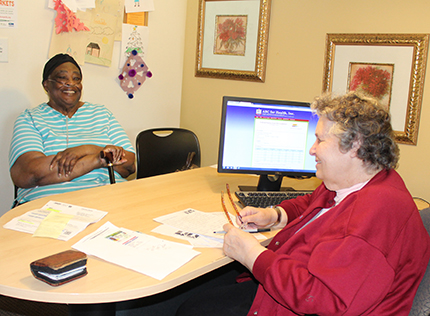 Once her term in elected leadership ended in 2015, Sister of Charity Christine Rody asked herself, “What’s next?” She knew she wanted to utilize her Spanish skills and to help people living in poverty, all while remaining in Cincinnati. Eventually, she found her way to the St. Vincent de Paul Charitable Pharmacy, where she has been volunteering for almost three years.

S. Christine finds that her current volunteer ministry is related to her previous ministries in a variety of meaningful ways. Prior to her time at St. Vincent, and even before her role in elected leadership, S. Christine taught religion to school girls in the United States, and about that time, the Church was shifting its focus from a local to global church view.

Sister wanted to connect her students with the world, but she didn’t know how. As a child, S. Christine had already experienced the world, without leaving her hometown. She had a pen pal in India, and her father loaded and unloaded foreign ships at a port on Lake Erie. Hearing stories from her friend and her father allowed S. Christine to experience the world, but while teaching in U.S. classrooms, she wondered how she could bring global experiences like those of her childhood to her students. So she investigated joining the Cleveland Diocese Mission Team serving in El Salvador, where she would also continue to teach. But before arriving in El Salvador, she journeyed to Cochabamba, Bolivia to learn Spanish at the Maryknoll language school.

Sister immersed herself within a new culture and began gathering new experiences for her former students in the U.S. Whenever the schools in El Salvador took a break, she would travel back to the U.S. to share her experiences with the American school children. She taught them about the world without them ever leaving the classroom.

When S. Christine arrived at St. Vincent years later, she brought her world experience and Spanish skills with her. Though she admits that her Spanish is still not perfect, she is proficient enough to be understood, but more important to her, she can understand the Spanish-speaking clients who visit the pharmacy. Because they are able to communicate with her, the clients are able to receive the assistance they need.

S. Christine’s main role at the pharmacy, in addition to her ability to communicate in Spanish, is to register clients. She enters their names, addresses, financial situation, etc. Each recipient receives a health screening every six months to ensure they are receiving the proper medication, which is donated from a variety of pharmaceutical sources.

S. Christine’s ministry at St. Vincent has continued to strengthen her relationship with God and the Sisters of Charity mission. Many of the clients she works with are so reliant on God, often because they have little else, and their faith teaches Sister each day. As part of her training for St. Vincent de Paul, she went on two house visits, and meeting the people and experiencing the poverty, she felt a connection with God, which she describes as a blessing.

In addition to her ministry at St. Vincent de Paul, S. Christine also does tribunal work for the Diocese of Toledo as a Defender of the Bond. She is part of the invalidation (annulment) process. After receiving all the paperwork for each case, she searches for anything that validates the marriage, then writes a brief, and sends it back to the diocese for review. Each case varies, but she said it takes about five hours to review and write the brief.

And when she has a moment to spare between her volunteer and tribunal work, S. Christine enjoys patchwork quilting. Several of her fellow Sisters cut the patterns for bags and potholders, and when she can, S. Christine sews them together to be sold in the Motherhouse Gift Shop.
While she remains busy, S. Christine takes time to find joy in her ministries. She says she has relied on divine providence in guiding her throughout her work, and each ministry challenges her to her think more. “Doing this work makes me more aware of my blessings,” she says. Though no longer in full-time ministry, S. Christine continues to heed God’s call and give back to her community through her numerous talents.