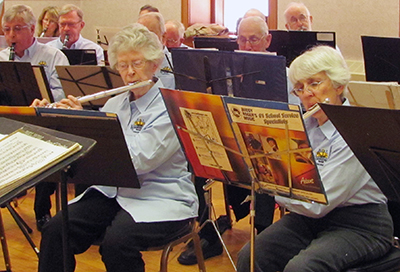 S. Mary Fran Boyle is a member of New Horizons Band of Cincinnati, an organization of dedicated musicians performing for audiences throughout the area.

“I see it now as serving my own Sisters,” says Sister of Charity of Cincinnati, Mary Fran Boyle, on her current volunteer ministries. Since retiring 14 years ago, at age 70, from teaching home-schooled children Spanish, Sister has enjoyed a variety of volunteer ministries.

S. Mary Fran’s past active ministries took her to various places and opportunities, but they mostly focused around working with the Hispanic community, especially in translation; she also taught Spanish. Once retired, Sister began recording textbooks for the blind at a studio in Colorado Springs, Colorado, which she says was, “a wonderful second education.” In Colorado, Sister also volunteered at food pantries and played music in a Hispanic parish every Sunday.

The role of music in S. Mary Fran’s volunteer ministries and daily life has been immense. In her 60s, she began learning how to play the flute and violin, and to improve her grade school piano playing skills. Sister joined a flute group of seven people who played in many nursing homes, libraries, churches, and hospice facilities in Colorado, playing up to four concerts a month. Through this, S. Mary Fran became a hospice courier, where she delivered needed items to hospice patients, and always took time to sit with anyone alone, because, “People who are alone always need someone to talk to.”

S. Mary Fran currently lives at the Sisters of Charity Mount St. Joseph Motherhouse. She belongs to New Horizons Band of Cincinnati, where she plays music at various nursing homes in the city. Every Monday, Sister plays piano in Mother Margaret Hall nursing facility. She also directs the flute choir, plays flute for funerals, and sings on special occasions. When asked what her favorite piece of music to play is, S. Mary Fran immediately said, “The Triumphal March” from “Aida,” which her group hasn’t played in four years, but was a great hit to all who heard it, and holds dear memories.

Volunteering at the Motherhouse’s Front Desk and Archives, and serving as a vigil minister allow S. Mary Fran to connect with and be present to her fellow Sisters. She has also served on many boards. Although she feels that her volunteer ministries now don’t directly relate to her past active ministries, she says, “Volunteering makes me glad to get up every morning and thank God that I am still around.”

In her spare time, S. Mary Fran enjoys reading, so much so that she spends most of her budget ordering books to put in the library. She also passes her favorite books directly on to others, so that they too can enjoy them. Although she calls herself a quiet person, volunteering allows for S. Mary Fran to be more conversant, serve others, and play the music she loves.