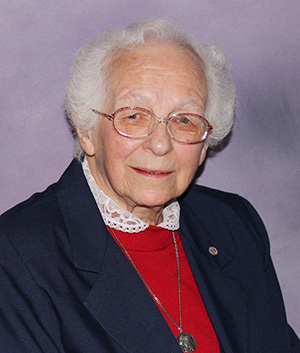 S. Francis Clare Pavioni died Jan. 10, 2019, at the age of 94 in Mother Margaret Hall, the nursing facility of the Sisters of Charity. S. Francis Clare was born on Jan. 24, 1924, to Peter A. and Frances (Villa) Pavioni in Gallop, New Mexico. She was the youngest of five children. She was a Sister of Charity for 65 years.

S. Francis Clare attended Gallop public schools and graduated from St. Mary High School in Albuquerque, New Mexico, in 1941. With the death of her mother, she went to live with her sister and family in Albuquerque for the last two years of high school where the Sisters of Charity taught and Sister Isabella Glenn was principal. She felt the need to contribute to her own livelihood at that time; she went to work for the Robertson and Drummond accounting firm for nine years with a break during World War II when she served in the WAVES (Women Accepted for Volunteer Emergency Services). There she was an instructor and trainer in the Link Instrument School (LITIS), United States Navy in the Bronx, New York, and Atlanta, Georgia. Their services included maintaining the complicated and technical instruments the pilots and trainers used before the days of radar; they trained Marines and Coast Guard in addition to Navy pilots.

After the death of her father in 1952, S. Francis Clare started thinking about entering religious life. Her Jesuit priest friend, James Veale, got her a job working with Sister of Charity Mary Assunta Stang at St. Joseph Hospital, Albuquerque; she entered the Sisters of Charity the following February 1953.

S. Francis Clare earned a Bachelor of Science in Accounting from the University of Dayton, Dayton, Ohio, in 1967. Her additional education occurred ‘on the job’ as the situations presented themselves.

S. Francis Clare’s years of ministry included service in SC hospital business offices in the West, as a manager, accountant and supervisor. In the East she served as accountant, computer programmer and director of computer services for the Congregation. She began as an assistant in the Treasurer’s Office at the Community’s Motherhouse (1954-’60), working under the direction of S. Elise Halloran.

In 1960 she traveled West where she served as a supervisor at St. Mary-Corwin Hospital, Pueblo, Colorado (1960-’61) and then manager at St. Joseph Hospital, Albuquerque, New Mexico (1961-’66). Sister returned to Cincinnati in 1966 when she joined Good Samaritan Hospital as a cost accountant. She then became a computer programmer for the accounting systems at Good Samaritan Hospital (1967-’82). From 1982-’86 S. Francis Clare ministered as an accountant with the Sisters of Charity Health Care Systems.

In 1986 S. Frances Clare transitioned into a new career as director of computer services in the Congregation’s business office at the Motherhouse. Health issues with lymphoma the following year caused her to be relieved of that responsibility; however, she continued to work as an assistant in the Sister of Charity Finance Office until she retired in 2016. One of her volunteer efforts over the years was directed toward Emmaus Initiatives, a nonprofit organization that collaborated with parishes to train volunteer ministers to serve fellow parish members in need.