Servant of God Sister Blandina Segale: An Inspiration Yesterday, Today and Into the Future 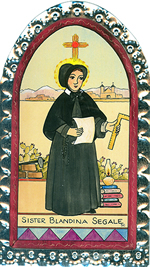 This retablos of S. Blandina Segale was created in 2013 by Clare Cresap Villa.

“Blandina’s life is a lesson in mercy, always recognizing the dignity of the human being. She was always ready to welcome the outlaw, the outcast and the despairing …” ~ Allen Sanchez

S. Blandina Segale continued to offer broad appeal throughout this past fiscal year. Mr. Sanchez originally petitioned for her sainthood in June 2014 in Santa Fe, New Mexico. Since, interest in her life, her writings and her ministry, both in the Southwest and in Cincinnati, has widened. Inquiries from a variety of cultures and countries desire to learn more; teachers, social workers, friends of friends who are experiencing serious health diagnoses are common examples of persons attracted to her virtues. Sister of Charity social media vehicles and resources have been shared and updated as new information becomes available. Art representations of S. Blandina are becoming more numerous; most featuring a southwestern motif. Many can be viewed in the Sister Blandina Room at the Mount St. Joseph Motherhouse. 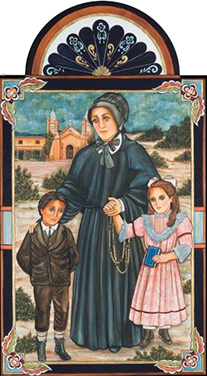 In October 2015 the annual conference for Communicators for Women Religious (CWR) convened in Albuquerque, Blandina country, featuring Mr. Sanchez as a presenter. He spoke of New Mexico’s diocesan efforts to prove S. Blandina’s heroic virtues; it has been the common people who have participated. In December their findings were delivered to Rome, Italy, featuring strong witness testimony. The Vatican authorities have completed their initial investigatory phase of her life and are now assessing whether she is responsible for any miracles to inform the Church’s decision as to whether she should become a saint. Two miracles are required to be canonized as a saint in the Catholic Church.

In April 2016, Cincinnati Magazine featured an article by Linda Vaccariello on S. Blandina’s influential mission in the Queen City of Cincinnati, highlighting her establishment of the first settlement house in the U.S. for Italian immigrants. The Santa Maria Institute continues to this day, ministering to immigrants and helping young families help themselves.

Like the call of our Chapter Directions, S. Blandina’s work continues on as she, too, risked the most caring of responses: serving and sharing herself with those in need; advocating for systemic change; and offering hospitality to the most vulnerable populations. As Mr. Sanchez has said, “She is a great hope and example for our time. [An immigrant from a poor family], she advocated for the poor. She built hospitals and orphanages with very little money. That’s the real hope for us.”