From the Archive – S. Blandina Segale 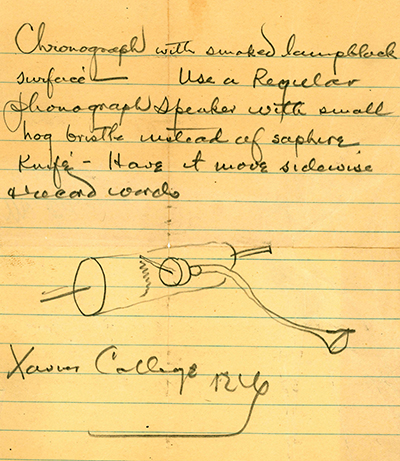 One historical event, an archival treasure, is verified by a scrap of paper. S. Blandina had attended a deaf-mute conference with “almost 100 percent permission” and apparently asked Thomas Edison for any idea of how to help deaf people hear. Here is his response:

Billy the Kid and S. Blandina Segale–names coupled by most admirers of the intrepid young Rosa Segale who left Cicgna, Italy, with her family, joined the Sisters of Charity of Cincinnati, and was sent West alone in 1872. Over a century later her letters to her sister, S. Justina, published in At the End of the Santa Fe Trail are still generating plays, articles, TV drama, online references, and numerous SC Archives requests. This past March scholar Donatella Ruggiero lectured to more than 400 in Italy about this beloved compatriot.

But when young Rosa left Cicagna, she never dreamed she would become so famous that the square in her hometown would be dedicated to her. In this Albuquerque issue it seems fitting to reportlesser known Albuquerque events. She was sent from Santa Fe in 1881 to open a school in Old Town, Albuquerque. Instead of giving up on the run-down convent in Old Town, she hired Italian stonemasons who not only shored up the corners of the adobe building, but built a second story, unheard of in that era.

She quickly realized the town was moving east toward the new railroad, so she wisely looked for land for a school in New Town. But when she saw that the property was being divided into neat town squares, not big enough for what she envisioned, she went into action. Approaching a land owner, she promised to educate his daughters for no fees if he would sell his land to the Sisters. Senor Armijo agreed, and the proposed dividing road was condemned legally. The “debt” was liquidated when Miss Victoriana and Candelaria Armijo attended the Academy in Cincinnati. St. Vincent Academy had S. Blandina to thank for the expanse of undivided land that included tennis courts and gardens. She herself helped design and build one additional adobe building with the Navajo Jose Apodaca.

From 1881 to 1889 she was missioned back and forth between schools in Old and New Town, sometimes a superior of both when Sisters lived in one convent. She finally left the West from Pueblo, Colo., in 1893 after she had told the Public School Board the Constitution of the United States gave her as much right to wear her habit as it gave them to wear their trousers.

She returned once more to Albuquerque in 1900 when Mother Sebastian asked her to leave the Santa Maria Institute, Cincinnati, in the hands of S. Justina and return West. The two sisters had founded Santa Maria in 1897, probably the first Catholic settlement house. Her directive was to help furnish each room in St. Joseph Hospital with one white bed, white chair, and white dresser. S. Blandina wrote back that as well as asking all the Catholic women for funds, she would have to ask the Protestant and Jewish women who were eager to help.

But one more Albuquerque event is typical: Always foresighted, S. Blandina saw it would be advantageous to have sewer lines brought from Railroad Avenue to the hospital door on Grand Avenue. When she asked an official to present that request to the City Council, he, “deep in politics,” was “slow to broach the subject.” Asking the sheriff to present her proposal, she added an enticement. She had been visiting the jail as she always did, feeding the hungry and helping the sick. Now she offered that the hospital would care for the sick prisoners if the well ones would dig the trenches for the lines. The deal was made. After all, her motto was “Do what presents itself”—and she certainly did.