Loving Remembrances: Getting to Know Our Servant of God 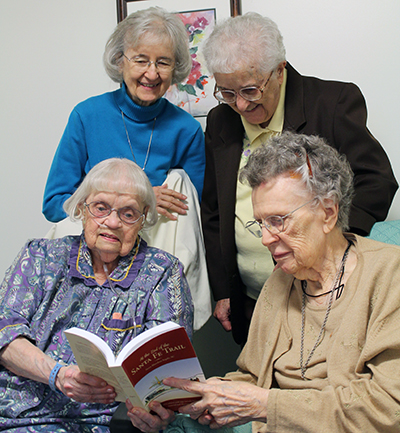 (Front, from left) Sisters Loretto Burke, Eileen Therese Breslin, (back, from left) Victoria Marie Forde and Annina Morgan enjoy browsing through the reprint of S. Blandina Segale’s At the End of the Santa Fe Trail and remembering their own experiences with S. Blandina.

Long before she was given the title Servant of God, she was simply Sister Blandina Segale to all who knew her. Small in stature, 5’1”, to some she had an unforgettable presence and authority, to others she was a loving great-aunt, and to many Sisters of Charity a memorable personality. Correspondence and interviews reveal remarkable aspects of her unforgettable and many-faceted personality.

S. Loretto Burke, 92, remembers taking care of S. Blandina Segale for two Novitiate years in the old infirmary, St. Mary’s. When S. Blandina asked the Novice if she had read her book, S. Loretto said, “What book?” whereupon S. Blandina handed her a copy from her side table.

S. Loretto had to hide it under her cape and read it when she should have been studying. When S. Blandina asked her how she liked it, she told her it was very interesting, but she didn’t realize it was true. Now she knows better, she said.

For her Blandina was always kind and cheerful but not a pushover. She asked for what she needed, but never in a demanding way. She remembers her with deep fondness.

Another Sister, Annina Morgan, 98, remembers her too, as someone who always thanked her with the Italian “gracie,” for everything she did for her, especially rubbing with oil S. Blandina’s arms, neck, and feet which had traveled so many miles. When she asked her if it was true about Billy the Kid, she replied, “Of course. Why would I lie?”

S. Eileen Therese Breslin, 98, knew her as a very pleasant and delightful lady, an ordinary Sister. She didn’t know she was an especially important one; S. Blandina never acted that role. Laughingly, she remembered that once when she got S. Blandina ready for bed, she remarked, “You aren’t a nurse, are you?” And Eileen answered, “No, Sister, definitely not.”

The late S. Redempta Wittberg wrote this anecdote a social worker told her: When Catholic Charitieswas being organized, the officials made tours of institutions to evaluate their qualifications for funds. Impressed with the work of Santa Maria, Miss McGuire, a social worker, asked to inspect the books, and S. Blandina pulled out a little old leather purse from deep inside her side pocket. Opening each of the four compartments, she explained that the first was for rent money, the second for food, the third for clothing, and the fourth for emergency needs.  Needless to say, she received help for record keeping.

One of the most touching stories is from the late S. Isabella Glenn: In July 1922 she was stranded coming home from her first mission. S. Blandina not only gave her carfare to get from Cincinnati to the Mount but let her sleep on a cot covered with an army blanket. When she had explained her plight, S. Blandina had told her, “As long as you remain a Sister of Charity, you can always have money and hospitality at any Sister of Charity house.” Years later S. Isabella explained that she tried to live by that maxim, to invite people to “come and we’ll make you welcome.”

During the 1934 Christmas vacation as a student novice, S. Mary Michele Ralph was told by S. Camilla Smith, Novice director, to read a book to S. Blandina who was not expected to live. A former music teacher, the elder Sister had permission to have a small radio playing music very softly. “I was just opening the book when from the bed came the words, ‘Turn it up!’ I almost fell off my chair. I thought she had risen from the dead! She didn’t die until years later, 1941.”

Anyone who has read At the End of the Santa Fe Trail knows how often S. Blandina taught music under unbelievable circumstances. During the years S. Catherine Zeigler took care of the aging Sister, she loved to listen to music, but she made sure that S. Catherine knew that she had permission to have a radio so as not to disedify her.

Homesick S. Sarita Cordova found it difficult to describe the joy she felt when she entered S. Blandina’s infirmary room and heard her exclaim, “Tu eres de Nuevo Mexico!” (You are from New Mexico!) Someone shared her love of her faraway home. Even as an aging Sister herself, she still felt relief and joy after hearing the Spanish language.

But not only Sisters remember this remarkable woman. In July 1993 considering a biography of S. Blandina, I interviewed parishioners of San Antonio Chapel which Sisters Blandina, Justina, her sister, and Euphrasia Hartman began in order to help poor Italian immigrants have a Mass close enough to attend and to receive religious education. Here are a few telling excerpts about these women:

S. Blandina was a very beautiful nun, very compassionate; dark complexioned, she looked Italian. She had a lot of spice to her. We all loved her. She had a good sense of humor. She was the organizer. She was really something else; she’d say, “Jump,” and you’d say, “How far?” She was a little more strict than the others, more demanding. She didn’t want you to get out of hand, and you minded her.

Sisters Blandina and Justina were real friendly, real loving, and strict. But we loved them because they were helping us.

The Sisters, all of them, used to take us in the automobiles to Coney Island one day in the summer. They got Vitt Stermer funeral directors to donate cars for transportation. They did everything they could for us.

Perhaps one of the most poignant remembrances was a 2011 interview with S. Carol Ann Brockmeyer’s aunt Grace Palombo in Bayley Place:

We belonged to St. Anthony’s church when Sister opened it on Queen City Avenue. Every Saturday we would sit on the church steps waiting for Sisters Blandina and Justina. We used to help them clean the church, mop and clean the benches and the floor, and when we finished cleaning the church, she gave us a card. We saved those cards for Christmas because she would take us down to Santa Maria, and we got our toys with those cards. At Santa Maria I got twin dolls with my tickets. That is the only toy I ever had in my life. I used to carry them under my arms under my coat.

Sister helped pay for our books and tuition to St. Bonaventura’s School, or we would have had to go to public school. She was the one who kept us in school. She took care of everything. To me she was a saint. Her face, her skin was so pretty. S. Blandina loved kids. She took care of all the kids.

Rita Stagge, S. Blandina’s great-grandniece, more than once told me that when she was quite young, she boarded at the Mount Academy after her mother died. S. Blandina brought her some of her favorite cashews and comforted her often. She said the family later visited Sister almost every week, and she believed they were the last family members to see her right before she died.

As I write this, the Cincinnati Enquirer has posted the obituary of Ruth Stagge, S. Blandina’s great-grandniece who had loving remembrances of S. Blandina. These are printed on the back of the new edition of At the End of the Santa Fe Trail. She was at the dining room table when S. Blandina worked with her mother who made the drawings used again in the latest edition. These beautiful words of S. Blandina to a friend seem fitting for Ruth now and for all who knew her:

We are born to die.
Death begins with our birth.
Paradoxically we are born never to die.
Both acts, Life and Death, come from incomprehensible love
as enduring as Eternity.