At the End of the Santa Fe Trail:
The Birth of Santa Maria Community Services 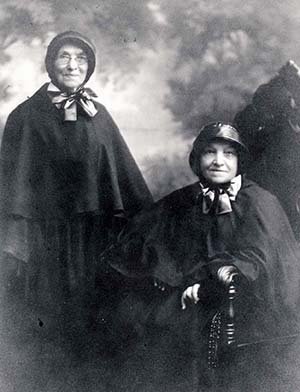 Sisters Blandina and Justina Segale were called on to unite the Italian immigrants in Cincinnati in the late 1800s.

The journal entries that eventually led to At the End of the Santa Fe Trail were written by S. Blandina Segale in the hopes that she could remember all of her adventures in the Southwest and later share them with her sister, S. Justina. Many people have read this book since S. Blandina’s canonization process began. I was interested in what direction S. Blandina’s life took after she was called back to Ohio. I found the answer in the book, The Story of the Santa Maria Institute, written in 1922 by Anna Minogue (see inset).  I, myself, had become acquainted with Santa Maria Community Services in the late 1980s as I worked in the Westside neighborhoods looking at Early Childhood Centers. It wasn’t until many years later that I came to understand that Santa Maria had a direct historical connection to the Sisters of Charity of Cincinnati. For those of us living in the Cincinnati area, this connection is a fascinating way to learn about S. Blandina and her sister S. Justina after their western experiences.

Anna Minogue writes, “The Story of the Santa Maria” was written because it has a message to convey. In every large city of the United States, the various sects are making strenuous efforts to alienate foreigners, especially Italians, from the Catholic Church, and often they are successful.” 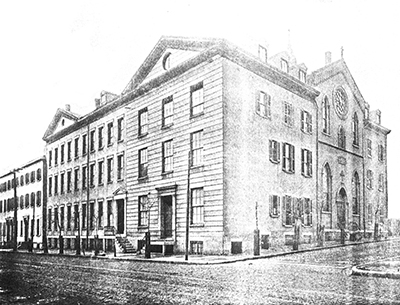 Santa Maria Italian Educational and Industrial Home was established under the auspices of the Sisters of Charity in 1897. The first home was located at 3rd and Lytle streets.

In Cincinnati in the late 1890s, these foreigners were Italian immigrants. These immigrants where mainly from Genoa, in northern Italy, and Sicily, southern Italy. While they were all Roman Catholic, their language and culture could not have been more different. The archbishop at this time was the Most Reverend Henry Moeller, DD.  Archbishop Moeller had managed the building of The Church of the Sacro Cuore di Gesu’, appointed an Italian priest and charged him with building a congregation. This became an impossible task because besides their other differences, they had chosen to live in community in separate sections of the city. The priest was having a difficult time uniting the two communities, and it was decided that the help of some Italian Sisters would be a great service. He traveled to New York to make just such a request from an Italian Order of Sisters located there.

This problem of uniting the Italian immigrants was also discussed with Mother Mary Blanche Davis, superior of the Sisters of Charity of Cincinnati. She realized that Sisters Justina Segale and Blandina Segale were the perfect pair for the task. Not only were these blood sisters Italian immigrants from the region of Genoa, but their skills in problem solving, community organizing, and education had been well honed. Once all the parties were in agreement the Sisters set to their new mission work in Cincinnati.

Their first task was to make home visits to familiarize themselves with the neighborhoods and families. They began to gather families together in neighboring shops to recite the rosary. Sisters Justina and Blandina would encourage Mass attendance and offer short Church teachings. As the Sisters continued to make connections throughout the neighborhoods, it was decided they should begin a school. But where should it be?

It is at this point that I digress a bit from Anna Minogue’s text to insert my own interpretation of the events that follow. I believe Minogue means to infer that Sisters Justina and Blandina had come to know the immigrant families well and true through their home visits and personal connections they had made. Evidence of this seems clear when, on the day the school was to open, not a single solitary child showed up! Our two intrepid Sisters did not seem the least surprised. In fact, when no child had come by 10 a.m., they shut off the lights and left!

To pick up with Minogue’s story, the absence of children had been noticed by Father Mackey and was awaiting the Sisters arrival to make their report. He fully anticipated that the Sisters would be leaving to return to their convent at Mount St. Joseph. Much to his surprise, S Blandina replied most emphatically, “Don’t you believe it, Father Mackey!”

They returned to making home visits as if to reinforce what they already knew to be true. The segment of this immigrant community that needed the help was the adults! The Sisters knew that the children had not come to their new school because their parents were a proud people who would not be seen taking free that for which others could pay. What this community needed was a “neighborhood house” where adults could go for advice on language and customs, work skills and housing, in short every manner of information to aide their navigation in this strange new land.

There were many more steps to come before Santa Maria would be established. Anna Minogue speaks of location discussions, the hunt for benefactors, approval from the Archdiocese, and countless hours of devotion to the cause of earning the confidence of the Italian immigrants. “The meeting for the purpose of organization was held September 27, 1897, at the Good Samaritan Hospital … After deliberation the following officers were unanimously elected: Sister Justina Segale, president, Sister Blandina Segale, secretary and treasurer, Mother Mary Blanche Davis, vice president … The organization was incorporated on December 8, 1897, under the name of The Santa Maria Italian Educational and Industrial Home.”

Santa Maria continued to serve immigrant groups as they arrived in Cincinnati. In the 1950s it was the influx of Appalachian citizens, later African-Americans. Today many of the clients are Hispanic/Latino immigrants. “Santa Maria continues to help any individual or family in need of our services,” says H.A. Musser, president and CEO.

The establishment of Santa Maria is a true grit tale of two Sisters and their limitless amount of “compassion, commitment, collaboration, leadership, motivation, perseverance, and fierce determination” (S Patmarie Bernard, SC PowerPoint History). Since that December day in 1897, Santa Maria Community Services has been known by several different names, under 16 directors, offering services in nearly a dozen different locations, served by countless volunteers including 73 Sisters of Charity of Cincinnati.

The Sisters of Charity sponsorship formally ended 45 years ago (1972), and Santa Maria is now operated as an independent not-for-profit organization but with a continuing close relationship with the Sisters of Charity. One-hundred twenty years later, Santa Maria is a catalyst and advocate for families to attain their educational, financial, and health goals. “Santa Maria’s vision is for Greater Price Hill to be a vibrant, thriving, and self-sustaining community” (S. Patmarie). Santa Maria is well staffed, located and purposed to be of service to those in need for many more years to come.