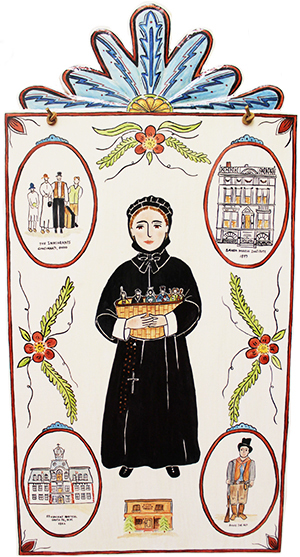 “On behalf of Archbishop John Wester and myself I welcome you to the first session of the Diocesan Inquiry of the Cause of Canonization of the Servant of God, Sister Blandina Segale.”
“In the name of the Father, and of the Son, and the Holy Spirit. Amen.

“On this 25th day of August, in this year of Our Lord 2015, the third year of the Pontificate of His Holiness Pope Francis, I call this first session to order.”

With these words Archbishop Emeritus Michael J. Sheehan, episcopal delegate, opened the First Session of the three to be held in Albuquerque, New Mexico. These are to prove on a diocesan level the heroic sanctity of Sister of Charity of Cincinnati Blandina Segale.

This formal Vatican-scripted session began with the Archbishop seated on a stage with Chancellor Fr. John Cannon who swore in each person involved.

Seated behind them were the historic commissioners: S. Joan Elizabeth Cook, S. Judith Metz, S. Victoria Marie Forde, and Peso Chavez, private investigator. Behind them historical commissioners, Sisters Pat Sabourin and Juanita Marie Gonzales, were seated with the St. Joseph’s Children board, the petitioners for the cause. On the side were the court recorder and the notary, Ms. Patricia Ramos, also sworn in. For further validation all proceedings were videotaped.

Because this session was open to the press and the public, in the audience of interested people present it was good to see Associates, former students, and friends of the Community.

To begin, the Promoter of Justice Fr. Coelho, “as prescribed in Sanctorum Mater,” read the titles of the 11 collected documents of the first session into the Acts and handed them to the Archbishop. After he read the title At the End of the Santa Fe Trail, he asked Bishop Ramirez, postulator, if the theological censors had read and written an opinion of the book. The answer was “Yes, and I present their letters that remain secret.” Who these theological censors are is not known so as not to be influenced by others.

Regarding The Santa Maria Institute, Bishop Ramirez responded, “No, the book was not written by the Servant of God and is entered into the Acts as documentation of her good works and heroic virtue. Sanctorum only requires the writings of the Servant of God be examined by the theological censors.”

Each of the commissioners was again sworn in and answered questions before and after presenting testimonials. These papers and notarized letters from the three Sisters of Charity and grandniece Rita Stagge, who knew S. Blandina, were also presented formally. These were locked in a leather case with the other material, including At the End of the Santa Fe Trail and The Santa Maria Institute.

With her paper S. Joan Cook also entered the 50 responses from Sisters of Charity who prayed to S. Blandina. After investigating the lynching S. Blandina prevented, Mr. Peso Chavez presented convincing evidence of the usual speedy “justice” in Trinidad through newspaper articles of the time S. Blandina was there, prison records of the man she saved from lynching, and proof of his son John who came to her for help. He added that among the hundreds he has worked on, this was the most unusual case he has ever investigated.

After these testimonials the Archbishop asked the promotor of justice and the notary to join him in signing the order to insert all these acts into the record. Finally, he solemnly announced, “The first session of the Archdiocesan Inquiry of the Cause of Canonization of the Servant of God, Sister Blandina Segale, is now ended.

“In the name of the Father, and of the Son, and the Holy Spirit. Amen.”

And the audience spontaneously applauded. We, Sisters of Charity, were humbled and elated that we could help move our sister, Blandina, one step closer to canonization.

This report would not be complete without special thanks to Allen Sánchez, CEO, St. Joseph’s Children, who with his assistant Kathaleen Myers and staff spent numberless hours to make this First Session run so smoothly.