“I earnestly beg God
to guide your business
according to His good
pleasure, and I hope
that He will be glorified
by it.” 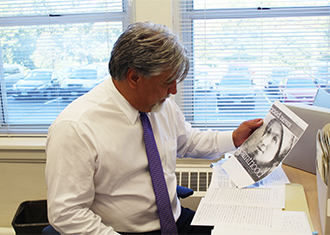 Tomas Sanchez and his crew visited the Mount St. Joseph Motherhouse in August to research material for the TV series, At the End of the Santa Fe Trail, to be based on S. Blandina Segale’s life.

Current interest in the cause for sainthood for S. Blandina Segale remains high and enthusiastic. Articles have appeared nationally as well as locally, offering insights into the young S. Blandina who founded hospitals and schools, but also rescued those who were being trafficked and advocated for justice in the Southwest. S. Blandina’s broad appeal continues to stimulate the activities of the Sisters of Charity Archives at the Motherhouse as well. Two areas of curiosity, for those following her cause closely, are the late August visit of the television production team of Tomas Sanchez and the Aug. 30 meeting of the canonization group held at the Mount St. Joseph Motherhouse. Both groups have return visits planned in the late fall.

The award-winning production crew for Sanchez Films LLC spent one week in August reviewing the many materials in the SC Archives related to S. Blandina’s life and ministry in the Southwest and her direct work among the Italian immigrants in Cincinnati. The company, headed by Tomas Sanchez, held a press conference on July 13 in Albuquerque, New Mexico, to announce their plans to produce the TV series, At the End of the Santa Fe Trail, and to raise funds for the project. They have been given permission to use the same title as that of her book which is an account of her experiences ministering to the needs of the Native American and Hispanic immigrants in Colorado and New Mexico in the 1890s; she was writing this to her sister, S. Justina, also a Sister of Charity. The filmmaker sees this as an opportunity to tell a positive story about a woman who cared for the needy and disadvantaged.

The basis for the television series will engage audiences with S. Blandina’s exploits while staying true to the story of this Sister who immigrated to the U.S. from a small Italian village in 1854, only to find herself in the New Mexico Territory staring down armed outlaws, including Billy the Kid. The Sisters of Charity of Cincinnati will have oversight and give final approval to the script the crew develops along with ongoing rights to review the materials’ authenticity. The production crew plans to produce the scripts for the series in October, with actual completion of the TV series estimated to be one year away; most of the actual producing will take place in New Mexico, providing 150 jobs to New Mexico residents. While in Cincinnati the crew also visited San Antonio Church, a parish continuing today, but started by S. Blandina to serve the Italian immigrants in Cincinnati in the 1920s; they met with current members of the church whose families ties go back to S. Blandina.

At the same time the TV production crews came, the canonization group for her cause – Bishop Emeritus Ricardo Ramirez (postulator) and Michael J. Sheehan (judge); Allen Sanchez, CEO of St. Joseph’s Children (petitioner) and Rev. Oscar Coelho (promoter of justice) also paid a visit to the Sisters of Charity Motherhouse and the Archives. This group is currently in the third session of the second diocesan inquiry and are preparing their report for the Pontifical Congregation for the Cause of Saints in Rome. They are authorized to inquire into S. Blandina’s heroic virtues. Recently appointed as the historical commission, to assist the canonization group, and taking their deposition for this phase of the process are: Veronica Buchanan, SC archivist; S. Victoria Marie Forde; Tim Moller, CFO, Sisters of Charity of Cincinnati; and Amelia Riedel, Communications director, SC Ministry Foundation; they reviewed the archive materials during September. Five current members of San Antonio Church were also deposed, recording their knowledge of the history of the parish and S. Blandina’s founding of their church in 1922; this took place at the downtown offices of the Archdiocese of Cincinnati. The Vatican has completed an initial investigatory phase on her life and is now assessing whether she committed any miracles to inform the Church’s decision on whether she should be a saint.

Allen Sanchez, CEO of St. Joseph’s Children, originally petitioned for her sainthood June 29, 2014, in Santa Fe, New Mexico. In speaking about S. Blandina, Sanchez remarked, “She saw good in everyone, including criminals, and at the turn of the century convinced the Bernalillo, New Mexico, sheriff to empty the county jail to help build St. Joseph’s Children, which still carries on her mission today. Her stands against violence in the Wild West are particularly relevant in a modern America as gun violence continues to plague the country. She finds the best in everyone.”