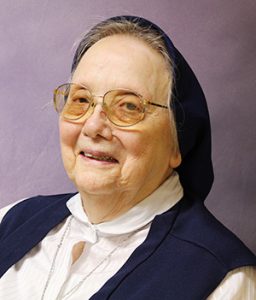 S. Mary Paula grew up as part of a large family of faith in Big Rapids, Michigan; she attended a one-room public school and finished there in 1940. Following school she worked with the Sisters at Bon Secour Hospital in Grosse Pointe, Michigan, in the diet kitchen; from her experience of being around Sisters she began considering religious life. She contacted her aunt, Si. Louise Marie de Puydt, a Sister of Charity, who arranged for her to visit S. Francis de Chantal in nearby Mount Clemens, Michigan. After several meetings with her she chose to enter the Congregation in September 1944.

It was in 1979 that S. Mary Paula was asked to come to Elizabeth Seton High School, South Holland, Illinois, to serve as sacristan in the convent chapel; she remained there until 1983 when she worked in the reading lab at Guardian Angels, Detroit, Michigan. She went to Our Lady Queen of Peace, Harper Woods, Michigan, in 1987; next she chose to go to Sacred Heart, Grand Rapids, Michigan (1988-’90) and then to St. Michael, Remus, Michigan (1990-’93). She came to Seton High School convent, Cincinnati, to retire in 1994. S. Mary Paula eventually moved to the Mount St. Joseph Motherhouse where she assisted with the distribution of mail and served where needed. In her leisure hours Sister enjoyed crossword puzzles, sewing, walking and gardening. It was important to her throughout her life to share faith and friendship with those who needed to be comforted or consoled. She would often say that she “felt the support of a great community.”