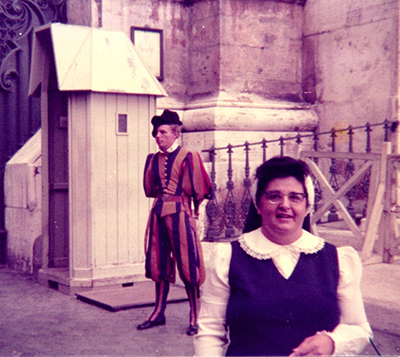 It was Friday, Sept. 12 when I took off from Pittsburgh, Pennsylvania, on our Rome pilgrimage. It was a full eight days highlighted by the canonization of Mother Seton, an audience with the Holy Father and the celebration of the Triduum masses at the four major basilicas of Rome: St. Peter’s, St. Mary Major, St. John Lateran and St. Paul Outside the Walls.

Our flight to Rome was calm and exciting. Seeing the airport guarded by soldiers with drawn rifles and a crew standing by in a military tank gave us an anxious feeling. Accommodations were not ready for us at our arrival. Some had to wait until 5 p.m. before getting their rooms. We were 10 minutes from the Vatican. We roomed at the Villa de Radieuse. The elevator, which held only three or four squeezed adults, was something to behold. Our first real glimpse of Rome was guided by Mother Mary Omer Downing. She was able to add much because of her knowledge and experiences of Rome.

The days were filled with riding, gawking, climbing in and out of buses. Of course, there were setbacks and disgruntled individuals but all was worth the waiting and inconveniences when we experienced the canonization and the audience with the pope. At the audience the Holy Father spoke in at least seven different languages.

The information from our tour guide on history, geography, etc. came fast and furious. We came to know at least a little bit about everything we passed. The antiquity of Italy is overwhelming. To see the remains of an earlier Rome, to visit the ruins of the Colosseum and the forums, brought back much Christian history.

The climax of the trip was the canonization. I was standing at the end of the row where the Holy Father had to pass in order to get to the altar. In my excitement I took his picture backwards, imagine my surprise when the flash went off in my eyes. Realizing what I had done and knowing it was too late to get another picture I said to St. Elizabeth Seton: “I prayed many years for this happy day for you, please let me get him on the way out of Mass.” My prayers were answered not only did he pass my way again but he stopped to give the choir a special blessing, and as he did this I snapped him and got a good picture. Thank you, Mother Seton.