“Friendship has the skill and
observation of the best physician,
the diligence and vigilance of the
best nurse and the tenderness
and patience of the best mother.”

9 Treasures of the McCann Room

Used today as a permanent display room for the Archives department, the McCann Room in the Sisters of Charity Motherhouse was first built as the infirmary for the Community and then became a classroom after the opening of the academy and College of Mount St. Joseph. After the college moved across the road to its present location, the room was named after S. Mary Agnes McCann (1851-1931), one of the Community’s many dedicated historians and archivists, and became a place to exhibit some of the wonderful treasures that she had worked to save over the years. 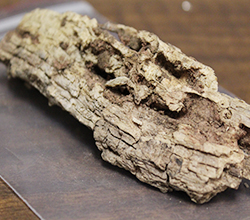 1. Bark from the Oak Tree in St. Joseph Cemetery

The story goes that one day, Saint Elizabeth Ann Seton and the other early Sisters were out walking in some of the wooded areas on their property in Emmitsburg, Maryland, when Harriet (Elizabeth Seton’s sister-in-law who had joined the Community) was taken with a particular oak tree and said that she wanted to be buried under it when she died, throwing an apple core at its trunk to mark the spot. Only a couple months later, Harriet passed on, and her wish was seen to as the Sisters laid her to rest under the tree, creating St. Joseph Cemetery, where many of the early Community was buried, including Elizabeth Seton, initially. This bark is from that original oak tree, which stood in the cemetery until 1984, when it succumbed to lightning. A new tree has been planted in the same spot and is standing there today. 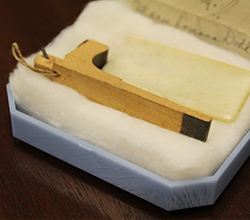 This key is from a clavichord (piano-like instrument invented in the early 14th century) that Elizabeth Seton used to teach music to her students at St. Joseph Academy and Free School in Emmitsburg. The music education ministry that Elizabeth Seton began at Emmitsburg stayed with the Community throughout its history, going all the way to the music department at Mount St. Joseph University, which has produced many great talents. 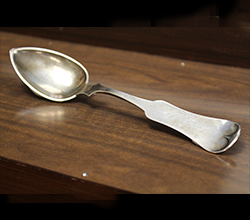 This spoon is one piece of the silverware that patients at St. John’s Hospital ate with from the institution’s opening as Cincinnati’s first Catholic hospital in 1852 to its name change to Good Samaritan Hospital in 1866. Countless patients would have possibly used this spoon in those 14 years that it could have existed in, including some of the many Civil War casualties brought to the hospital. It’s strange for us today to imagine going to a hospital and receiving anything other than disposable plastic cutlery, but in the 19th and early 20th centuries, cutlery, plates, and other tableware were not only reusable but were often elegant, like this silver spoon with “St. Johns Hospital” engraved into the handle. 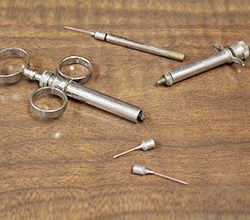 Also used at St. John’s Hospital, these hypodermic needles belonged to S. Anthony O’Connell (1814-1897), who served as the administrator of the hospital for many years. S. Anthony is more known for her title as “angel of the battlefield,” though, as she led 41 other Sisters of Charity across the country during the Civil War to serve as nurses to the sick and wounded soldiers. These needles were just a few of the many items belonging to her that were preserved at the time of her death. The Sisters had such high regard and respect for her that when she died, they preserved nearly every item that had belonged to her, even stubs of pencils. 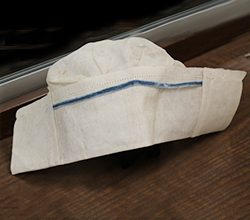 As professional nurse’s training became standard procedure at the turn of the century, all Sisters of Charity hospitals opened training schools for nurses. Nurses’ hats were badges of identity, a way for others to know what school they had come from depending on their hat’s design. All of the Sisters of Charity nursing schools adopted a blue ribbon across the front as their differentiating feature. 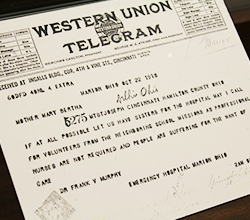 When the 1918 flu pandemic spread throughout the United States, many facilities didn’t have enough personnel to handle all the cases and were desperate for nurses and any people who could help. Many Sisters serving as teachers in different areas took a break at this time to serve as nurses, Sisters in Colorado going into the mining camps and Sisters in the Ohio area going into the Appalachian area of Eastern Kentucky, for examples. This telegram from Dr. Frank V. Murphy of the emergency hospital in Marion, Ohio, is addressed to Mother Mary Bertha Armstrong and details one such change in the Sisters’ duties, reading as follows: “If at all possible, let us have Sisters for the hospital. May I call for volunteers from the neighboring school missions as professional nurses are not required and people are suffering for the want of care?”

Every Sister of Charity in her novitiate years was assigned a desk like the one here with a top that opened. The desks were one of the few places where the novices could keep their personal belongings and notes, books, and letters, so they were very dear to them, seeing them as “their spaces.” 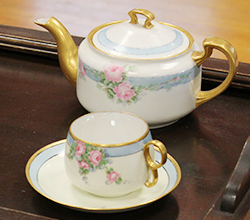 With a big interest among young women of the 19th and early 20th centuries to learn porcelain painting, a number of the Sisters learned the craft in order to offer classes after school. Since teaching salaries received from the missions were often too low to support them, the porcelain painting classes, along with music classes, benefitted the Community greatly. This particular tea service was hand painted by S. Marie Adele Girard (1885-1965), and features light blue bands decorated with pink roses. 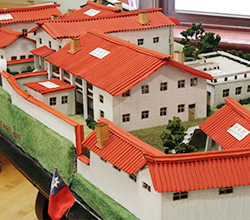 In 1928, the Community sent six Sisters to China to take over a hospital in an underdeveloped area. Traveling by ship across the ocean, then going 600 miles up the Yangtzee River to Wuchang, they reached their destination and started developing St. Joseph Hospital, adding a nursing school, nursing home, and orphanage. After bombings destroyed parts of it in World War II, the Sisters made plans to build a new hospital, but it was never completed because they were forced to evacuate after the Communist takeover. The Sisters’ time there still remains a treasured part of their history, though. This model of the mission catches your eye as you enter the McCann Room. It was made by Sisters Paul Vincent Lio and Virginia Hughes at the Motherhouse in 1936 before being sent to Washington, D.C. for a mission display held in 1937.

To see these items and many more on display, guests can schedule a tour through the Sisters of Charity Archivist, Veronica Buchanan, by calling her at 513-347-5348 or by emailing her at veronica.buchanan@srcharitycinti.org.