The Holy Spirit Chapel in Mother Margaret Hall features a collection of beautiful stained glass windows designed and executed by Emil Frei. Each window—formed from “antique glass,” a blown glass with varying textures and tones—features three medallions stacked atop each other and adorned with holy symbols.

Former Sister of Charity Francis Regis (Loretta) Lambert, in her bachelor’s degree thesis written in 1951, examined the windows’ symbolism. “Symbolism was early expressed in man’s development, for he needed to portray his inner meanings in an outward form,” she wrote. “Christ Himself, the Master Teacher, made constant use of symbolism in teaching His doctrine…”

In a similar fashion of teaching, the windows of the Chapel feature six of the seven Holy Sacraments, followed by two windows in the sanctuary that represent the Old and New Laws, and circular windows honoring music in the choir loft. Read about the meanings behind the symbols and the stories of Catholic beliefs and sacraments they teach. 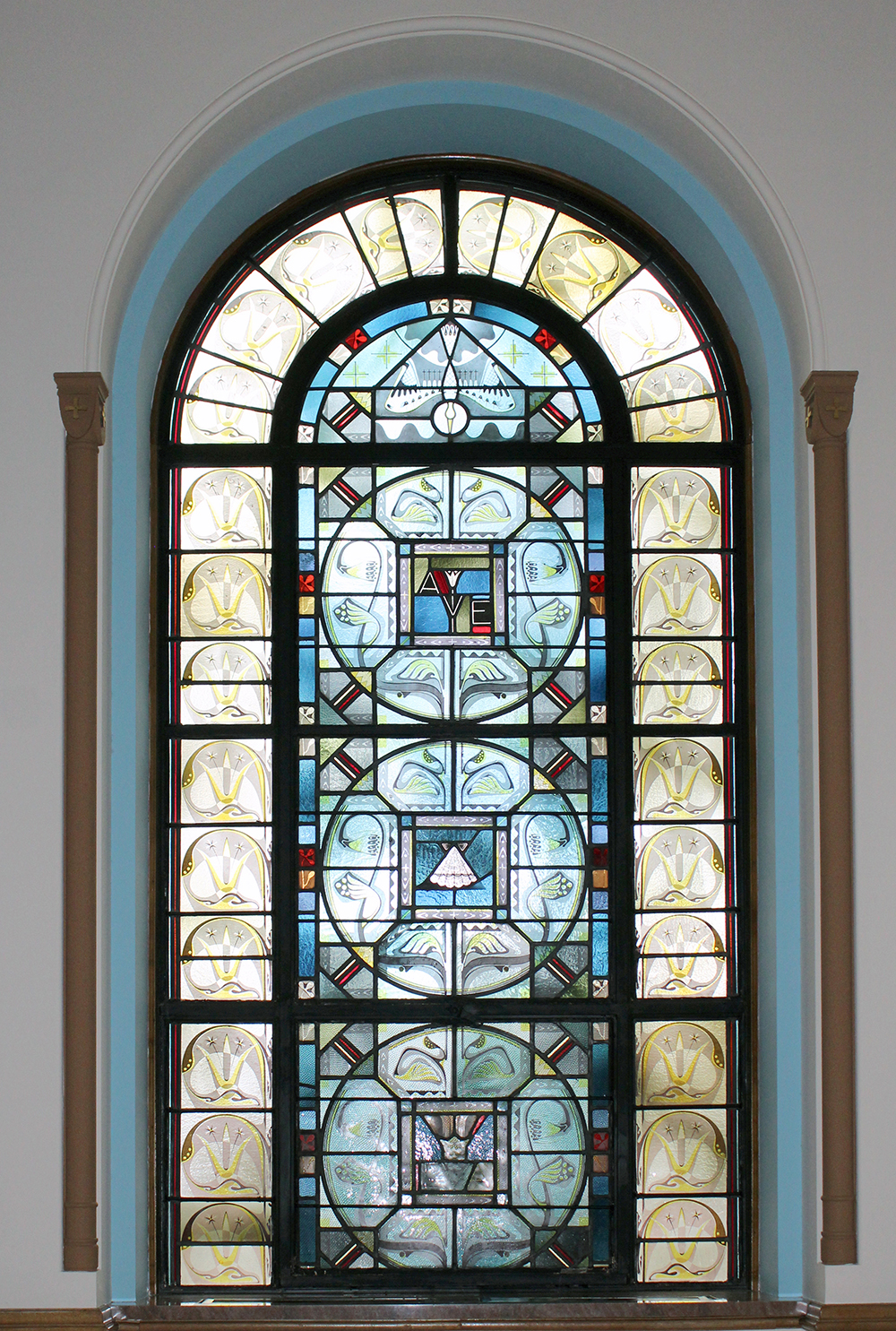 The first window represents the sacrament of baptism. In the center medallion is a scallop, which symbolizes the cleansing waters of the sacrament and is an outward sign of sins being washed from the soul. Below, the bottom medallion features a thistle and the word EVA because sin (the thistle) entered the world through Eve, the first woman. In the top medallion, a lily (purity) and AVE (the Virgin Mary) symbolize Christ’s sinless conception and how his birth would eventually lead to the forgiveness of our sins. 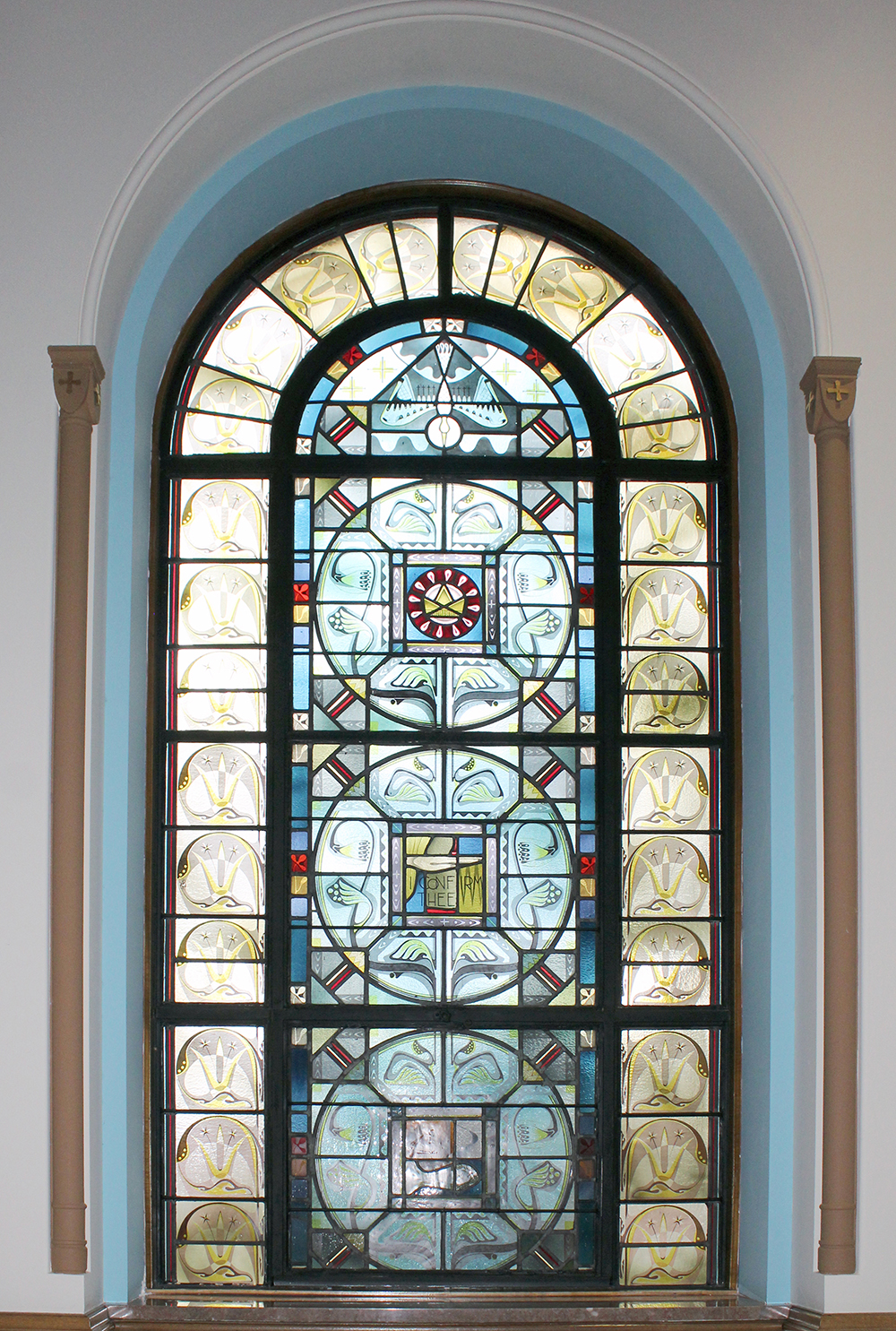 In the next window, the focus is the central medallion, in which the hand of a bishop is extended over the words “I confirm thee.” Because confirmation signifies the recipient’s rejection of the devil, the bottom medallion depicts the Chi Rho (Christ’s monogram) triumphing over the serpent. At the top, a crown is surrounded by 12 tongues of flame to represent the eternal life we receive through Christ, as well as the Holy Spirit descending upon the Apostles at the end of Pentecost. 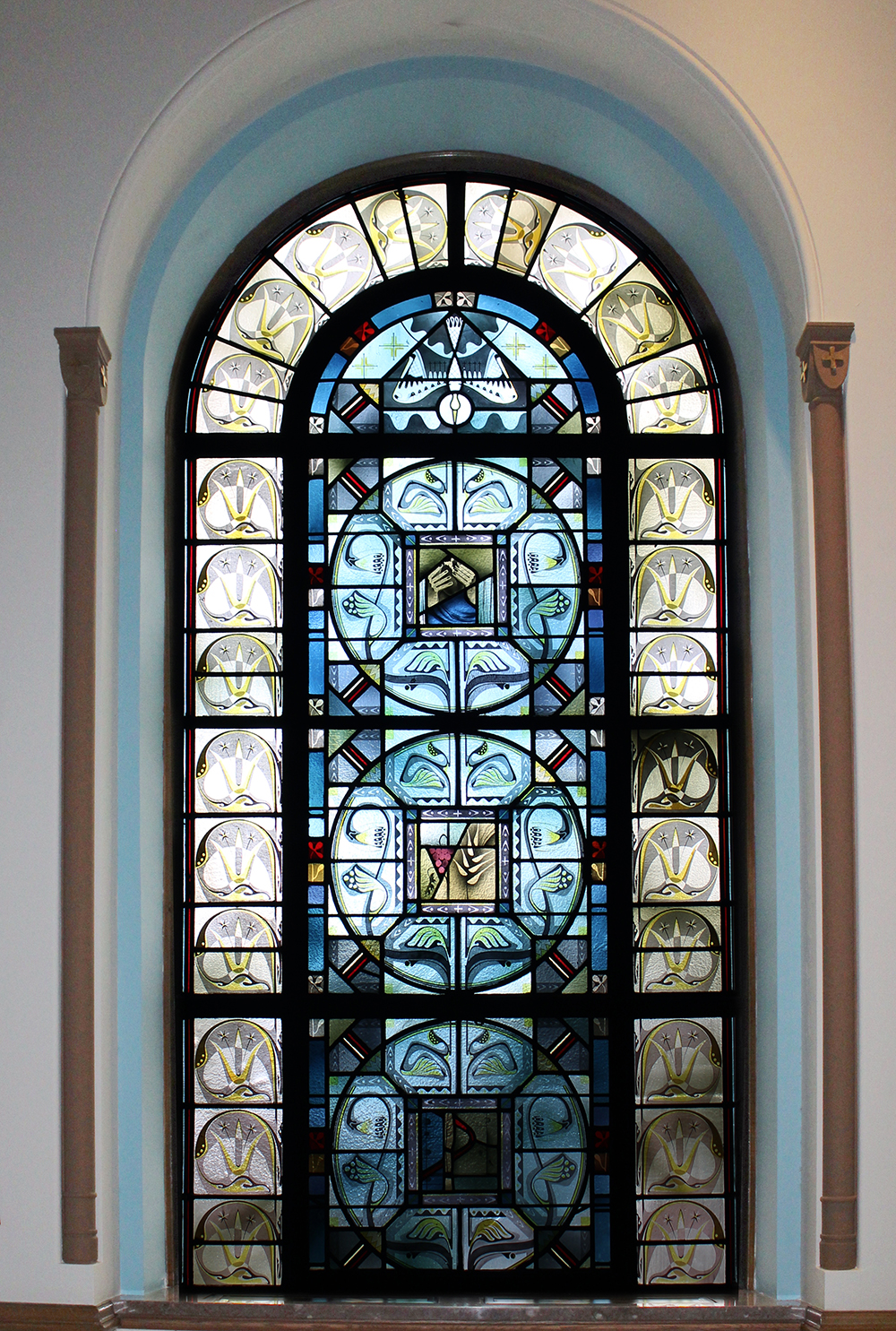 The Eucharistic window’s focal points are the wheat and grapes, representative of Christ’s body and blood, featured in the center medallion. Above the central medallion, the hands of Christ are breaking bread to give to his followers, and below, a large Chi Rho is surrounded by smaller versions, which according to S. Francis, suggests “a communion of the faithful in Christ, and their role in life as ‘other Christs.’” 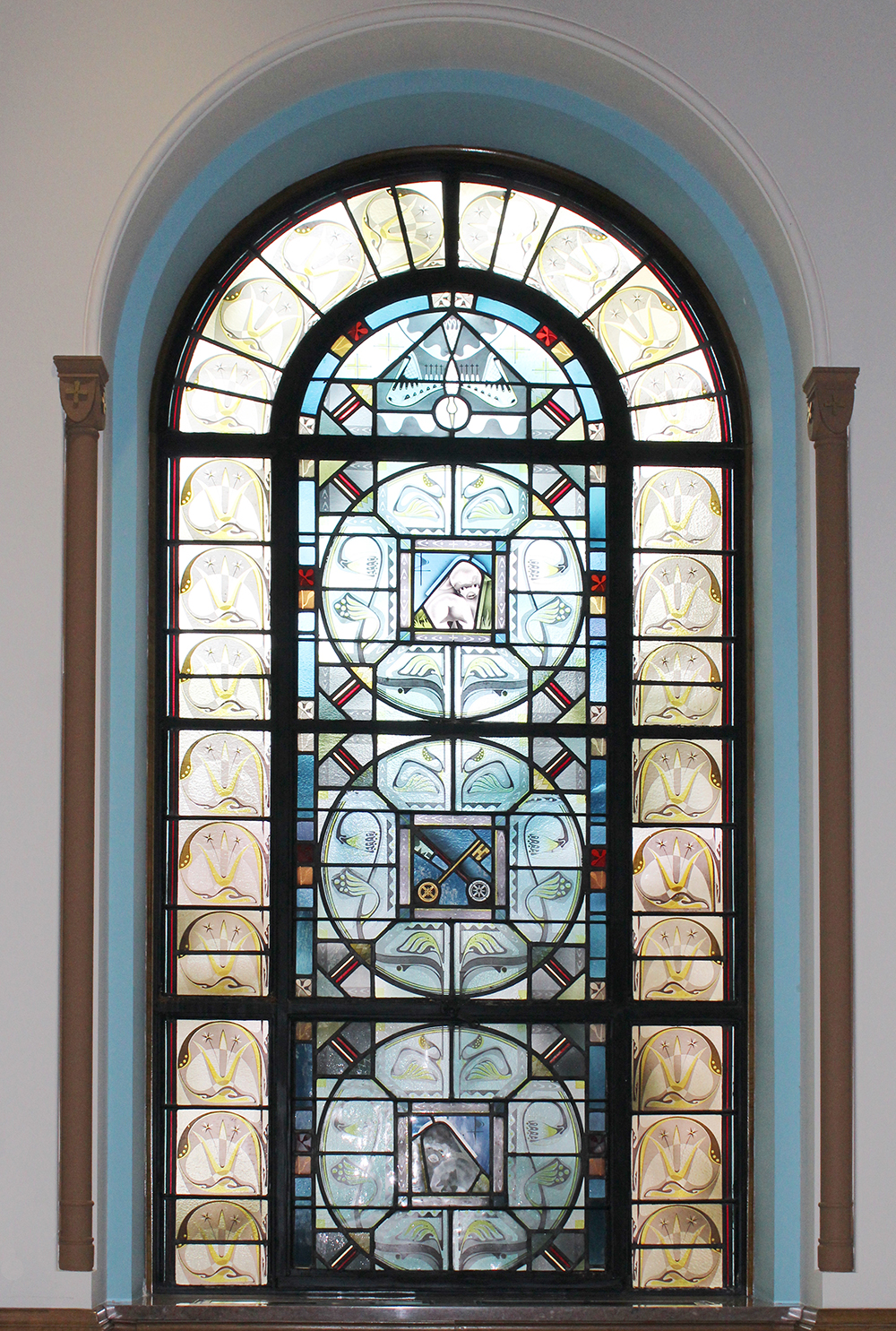 In the sacrament of penance, the priest has the authority to absolve sins in the name of God, and this is represented in the fourth window, where two keys are the central focus. The one key represents forgiveness, while the other is excommunication for the unworthy. This idea of forgiveness and retention of sins is also represented in the white and black lambs, which appear in the top and bottom medallions respectively. 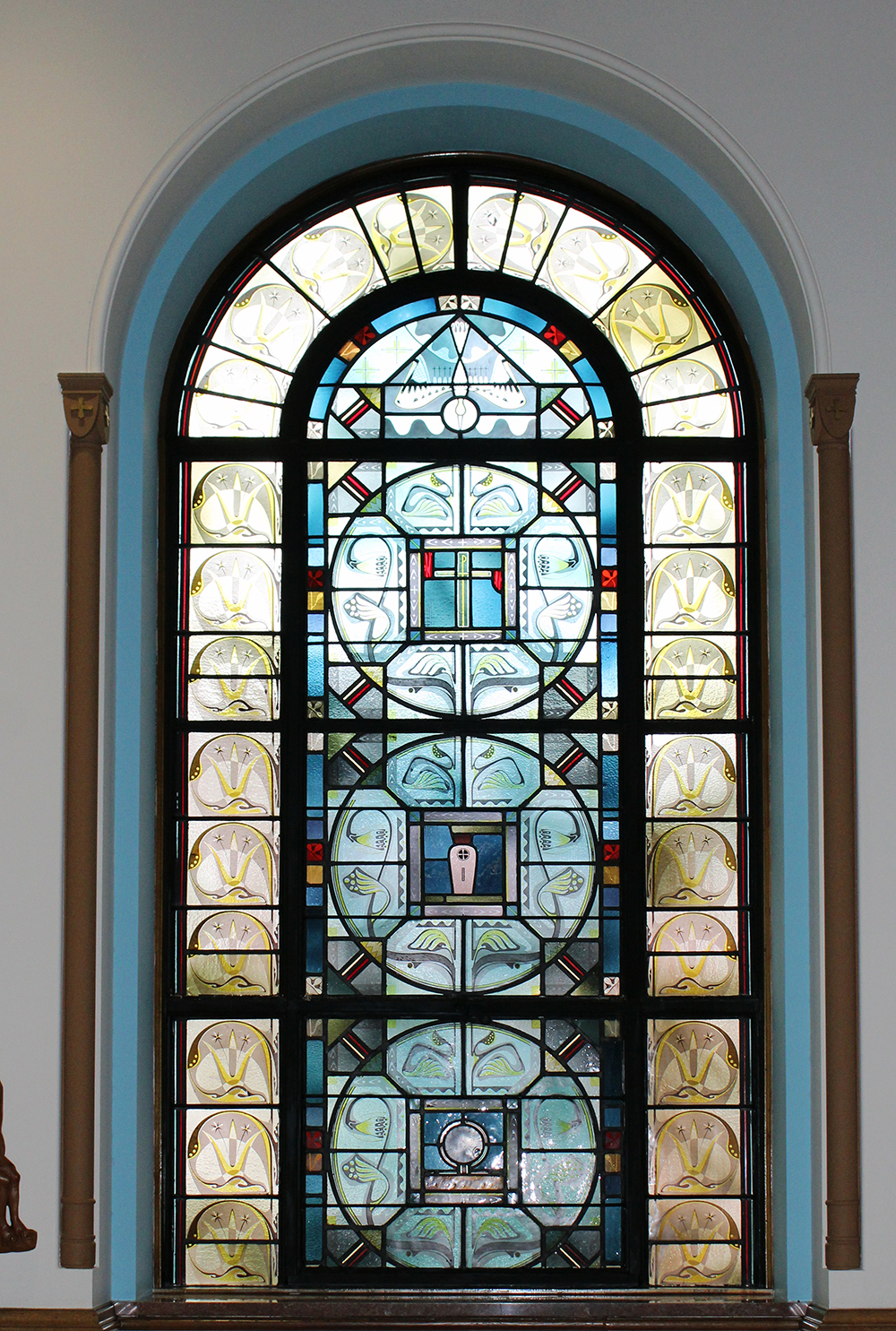 In the center, a jar of Holy Oil sets the theme for the fifth window. This represents the healing effects of the sacrament. At the top of the window, a Chi Rho is mounted on a plain Latin cross as a symbol of the anointing of the oils, and in the bottom, the Omega, the last letter of the Greek alphabet, suggests this is usually the last sacrament a person will ever receive. 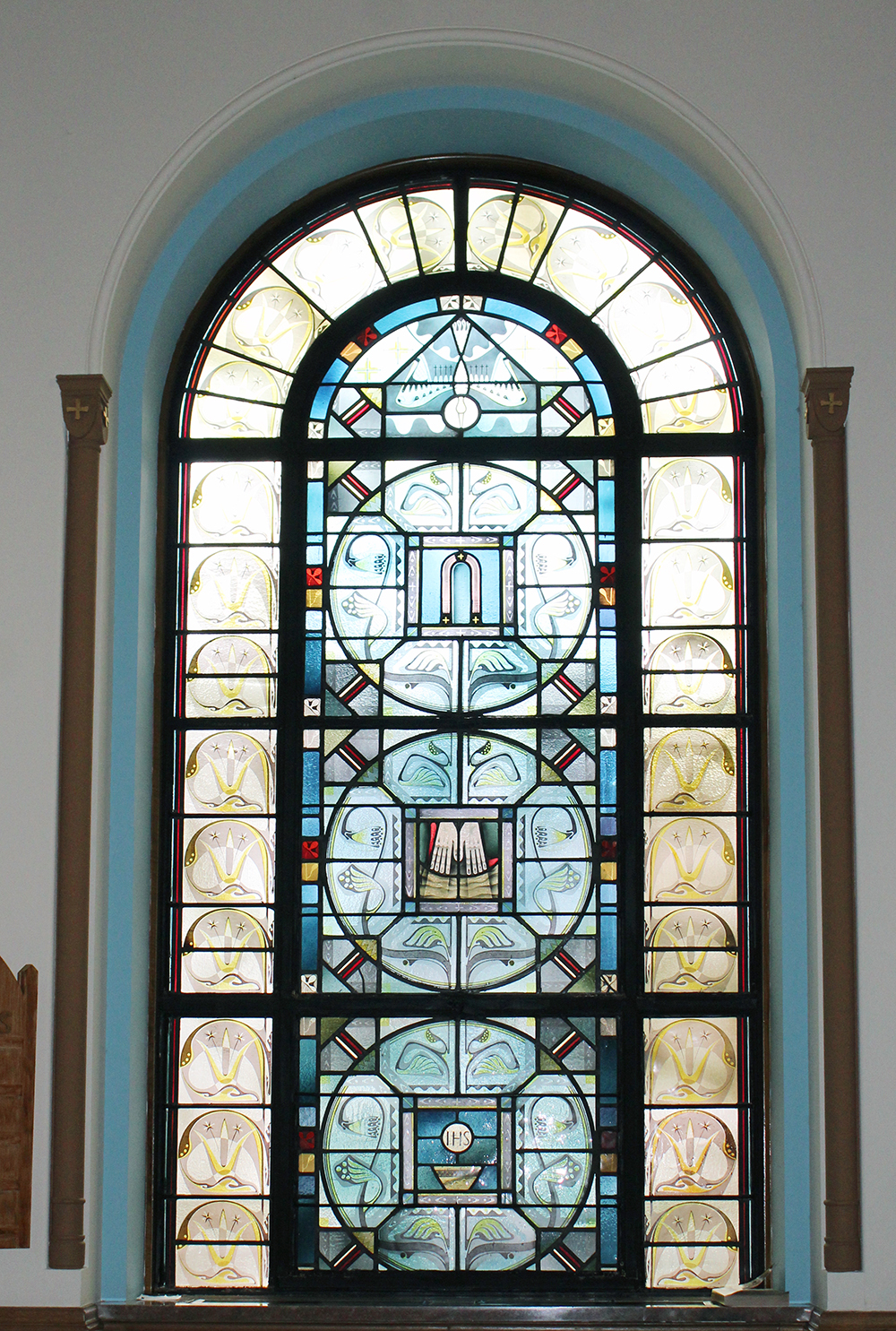 The last window embodies the sacrament of holy orders. In the center, the hands of the bishop are conferring holy orders to the candidate, and the positioning of the hands suggest the sacrament is for the priesthood. The top medallion holds a stole, which signifies powers given to the recipient, including power to administer sacraments, celebrate Mass, and preach. The bottom holds the greatest privilege of priesthood: a chalice and host, for administering the body and blood of Christ. 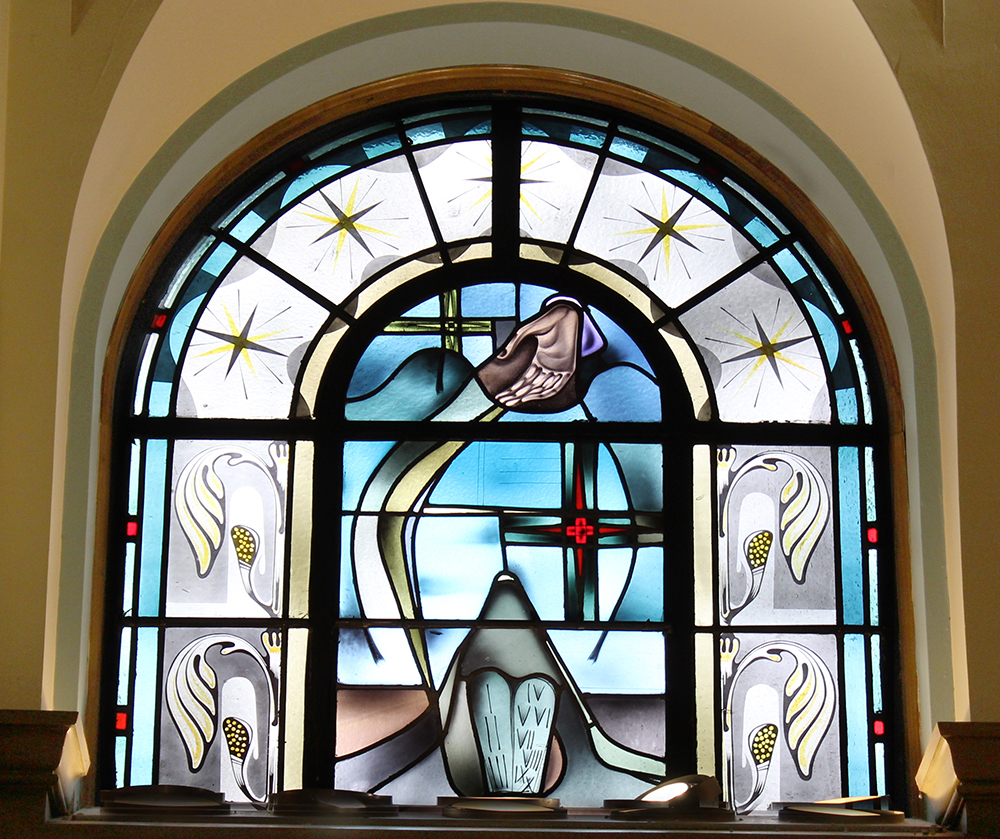 The two windows adorn the space of the sanctuary, and each represents the Laws of the Lord. On the right-hand side, the Old Law is present. An open, extended hand signifies God the Father inviting everyone to a life of grace, and long, sweeping lines descending from His hand represent that grace. Below, two tablets with the Ten Commandments are a reminder to viewers of the Laws of God. 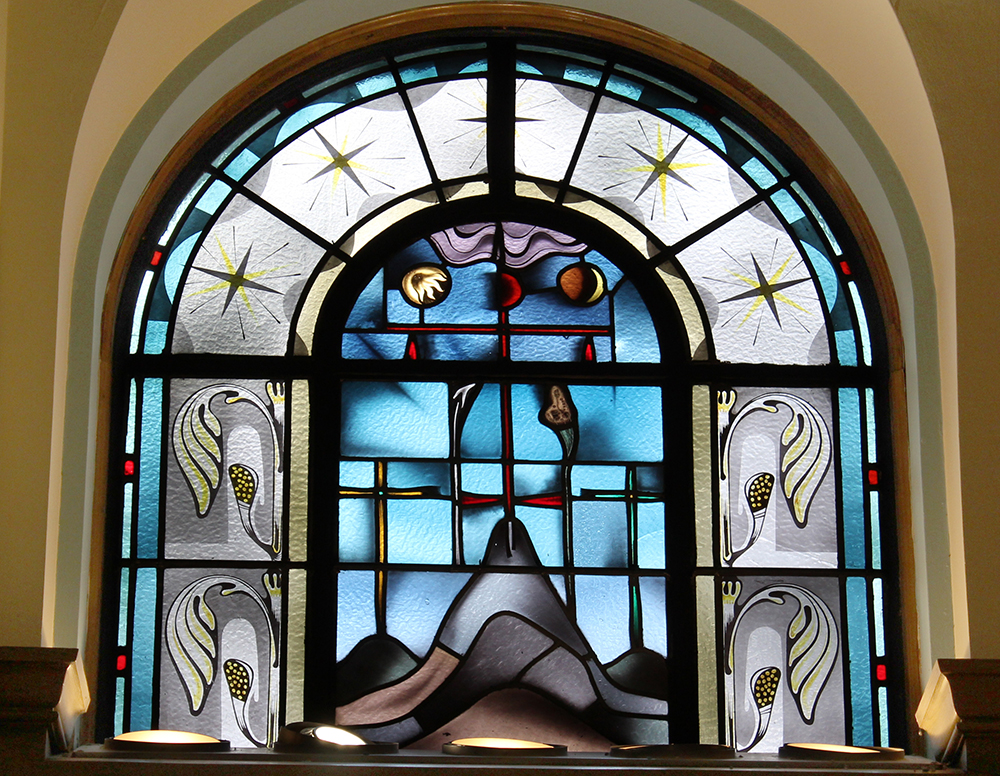 The New Law, in the left-hand window, depicts the crucifixion, with the large cross upon which Christ was crucified and two smaller crosses for the two thieves sentenced to death with Him. Above the crosses, the sun and moon are darkened, as depicted in the Bible. To the left of the large cross, a spear is reminiscent of the one that pierced the side of Jesus, and on the right are a scourge and sponge, two more symbols of the Passion of the Christ. 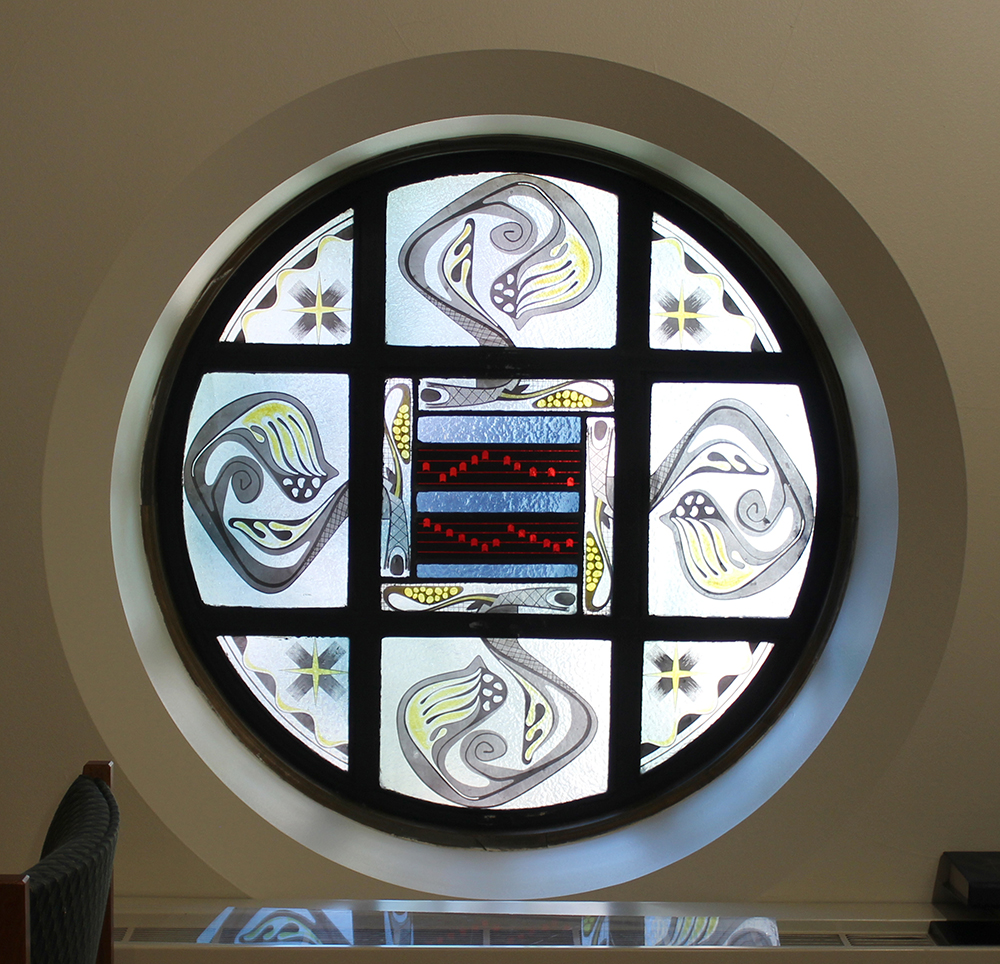 In the choir loft, two windows celebrate the importance of music within the Church. On one side, a staff with four lines of Gregorian notes symbolize the chanted parts of the liturgy, and the other holds a lyre with more Gregorian-style notes. The pair of windows represent Saints Gregory and Cecilia, who furthered the music of the Church.

The namesake of the chapel—the Holy Spirit—is also very present through the space. According to S. Francis, the plan for the chapel “sprang from a desire to promote devotion to the Third Person of the Blessed Trinity.” The symbol of the dove is repeated throughout the chapel, as it appears above the main altar and each window. A certain harmony exists among the windows, too—in the colors and designs—creating a soothing, peaceful space that embodies the Holy Spirit in many ways.