A School in Kwapia: Envisioning a Future through Education 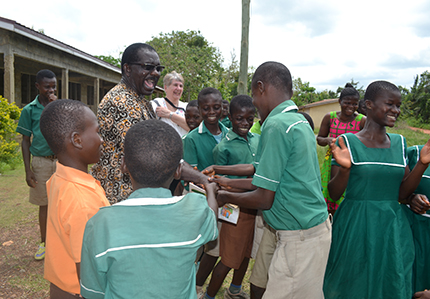 At one of the local schools, SC Associate Fr. John Amankwah met and shared many laughs with the children.

In March, S. Caroljean (Cj) Willie and Sister of Charity Associate Father John Amankwah traveled to Ghana in anticipation of building a school in Kwapia, a part of Ghana’s Ashanti Region.

The idea for the project began during Fr. John’s time as associate chaplain for a Cincinnati council of the Knights of Columbus (K of C). After attending several meetings and hearing about their local activities, he challenged them to expand their sights and look beyond their community. He suggested they look to the poor of the world. From his interactions with the K of C, Fr. John began to envision developing a library rather than a school in Ghana. But one of the K of C members asked, “What good is a library if people cannot read?”

Since 2012/2013, Fr. John began talking to others about building a school in his home country, and in 2014, he created a project board, with himself as president and several Cincinnati west siders, including S. Cj, as board members. Working diligently, they secured recognition from the IRS for their organization as a 501(c)(3) nonprofit. 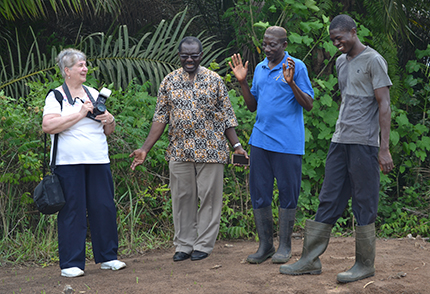 During their trip to Ghana, S. Caroljean Willie and SC Associate Fr. John Amankwah met with a local surveyor to discuss building a new school.

The next step in developing the school meant traveling to Ghana to secure land for building. During an initial trip, the board met with the chief of Kwapia, who agreed to grant them 10 acres of land, but they would be responsible for securing all the paperwork, clearing the land, and building the school. Of course, procuring the land required more than one trip, so this past March, S. Cj and Fr. John flew back to Ghana for a week to meet again with the chief and church leaders of the area. Their main goal was to secure documents for the land, to ensure it belonged to them.

Once all the paperwork for the land is finalized, construction can commence, but the school will have to be completed in phases. Phase one is two-fold, and encompasses both raising funds, as well as actually building the school. According to S. Cj, their goal is to raise about $2 million, which will enable them to build a school with bathrooms, staff quarters, a rec room, and nine classrooms. This phase will cover the basics, and as funds become available, additions to the school can be constructed. First and foremost, however, the land will need to be cleared and fenced. Left unfenced, the space is vulnerable to squatters, which S. Cj said was the case when they first visited the site. 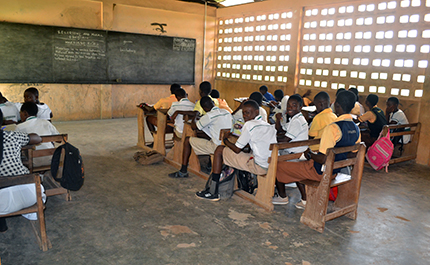 The timeline for this initial phase is ideally two years because too often, other organizations have promised assistance to these communities but never delivered. The two years is meant to generate hope, though raising funds through the generosity of donors will pose the biggest challenge.

Staffing and building the school is less of a concern for S. Cj and Fr. John. The Sisters of the Holy Spirit, a local religious community, have agreed to staff the school, and the local bishop is on board with the project. To be successful, however, S. Cj said the local lay people need to be a part of the process. “This is to be a cooperative effort involving the chief and the people of the region,” she says. Taking part in the production of this project will also allow the locals to embrace the school within their community, and as S. Cj hopes, it will make it “their school.” Once built, the school will be for kindergarten through senior year of high school, and will serve children within a 10-mile radius. 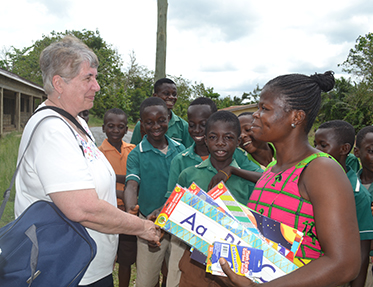 Prior to visiting Ghana, S. Cj had bought school supplies, such as simple maps, flashcards, alphabet charts, and other basics, to share with the local teachers. While visiting a school, she put up a map and asked the children to find the United States, which they pointed out immediately. However, when they were asked to find Ghana, not a single student could. Nor could they point out Africa. S. Cj said the experience made her realize how needed school supplies are, as well as a better school. The teachers’ quarters were under the trees outside, and they had no bathrooms. Though she has worked throughout eastern Africa many years, she said visiting Ghana was very different, albeit enlightening.

For Fr. John, the school serves as a source of hope for the country. As a native of Kwapia, he says, “My heart is still there,” and his hopes for the school are “very big.” When he sees the children in the village, he realizes they have no future without education. He himself is thankful for the opportunities he had to receive education through religious Sisters and other charitable organizations, and he wants to ensure these children receive similar opportunities. He says, “If you want to destroy a people, take away their education.” His hope is to build up the children through the school so that they can help themselves and their country.