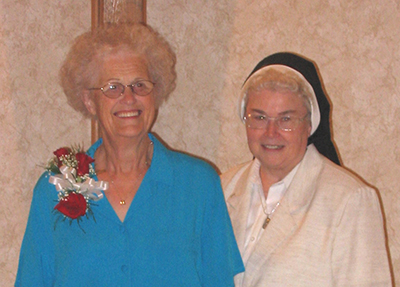 God’s grace is like a gentle stream that trickles through the experiences of our lives, then bubbles up and overflows its banks. The journey that led Alice Graham to become an Associate on June 18, 2005, is a reflection on that gentle stream.

A welcoming smile and bright eyes are the gifts that draw you to Alice and are the gifts that drew Alice toward becoming an Associate throughout her life. She met the Sisters of Charity for the first time when a family move transferred Alice and her sister to Holy Name. Alice was in the eighth grade and her sister, Florence, was a freshman. This was their third school and they quickly found the SCs to be women who enjoyed life more than the Sisters in the other schools. The Sisters were down-to-earth, truly human, and very gifted educators.

Alice loved the Sisters, but that was not her vocation. Florence, however, became S. Joanna Mary, an educator, who died in 2006. This connection made the SCs familiar to Alice who married Dick and raised a close family that now includes four sons, two daughters, and 14 grandchildren.

“Let all things be done with charity.” ~ St. Vincent de Paul
This was a gentle stream that found Alice and Dick active in their parish communities, which both had schools staffed by the Vincentian Sisters. They first lived in St. Pius parish, where Bible classes and PTU kept them connected. Later they moved to St. Rita’s where they took part in the new Christ Renews His Parish program. Alice and Dick were the first leaders of the renewal weekends. They helped to establish the Social Concerns Commission and were influential in the Care and Share Christmas Program for the poor. Throughout their years together, the church and its efforts for others kept them connected. Since Dick’s death in 2001, Alice has continued her connection with the church.

A familiarity with Mother Seton came from Alice’s SC connection beginning with the Mother Seton League at Holy Name. But she was most intrigued by Saints Vincent de Paul and Louise de Marillac whose love for the poor touched her heart. For years Alice knew that she wanted something more in her life. At one point she even kept a copy of the Universe Bulletin’s list of congregations that had Associates, but nothing hit home.

The gentle, rolling stream bubbled up when Alice heard about the merger of the Vincentian Sisters and the Sisters of Charity. Her classmate, S. Zoe St. James, invited Alice to consider becoming an Associate. The bubbles kept coming as the Wednesday Masses, dinners and sharing at Villa San Bernardo fed her soul. The Sisters were witnesses of a genuine caring and charity for each other. The Sisters, some who had taught her children, were welcoming. There Alice found peace, tranquility, love and a place where her stream could run over.

Alice lives Charity love in many ways: “I am very involved in volunteering with The Christ Child Society. I sew for the layette program and crochet mittens and hats for the winter coat program. I take Eucharist to the homebound and visit several elderly ladies each week. For 45 years I have been involved with the same Prayer Group from St. Rita’s. We have supported each other through births, deaths and serious illnesses. I am also involved in a Bible Study Group. Last, but not least, I answer prayer requests on ‘Our Prayer’ on the Internet. Five of my six children and 12 grandchildren live in the area so I am still a busy mother and grandmother.”

The times when Sisters and Associates come together in small groups, in gatherings of local Associates and SCs are life-giving. Alice’s deepest wish is that the overflowing stream of Charity Love will continue to bring spiritual growth, learning and greater engagement with each other. Look for Alice’s smile and bright eyes, they are a bubbling stream in themselves.