Blooming Where She is Planted: Barbara Raymond Celebrates 25 Years as an Associate in Mission 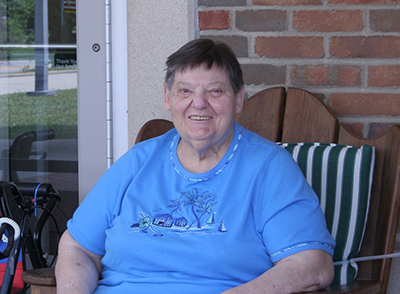 Barbara Raymond made her commitment as an Associate in Mission in 1989.

I’m sitting in the dining room of the Samuel W. Bell Home, having a luncheon date with Barb Raymond. It’s a lovely facility nestled into a suburban neighborhood on Muddy Creek Road, on Cincinnati’s west side. The 24 residents occupying this modern facility complete with Koi ponds in their peaceful courtyard can’t fully appreciate their setting because every one of them is visually impaired. As I chat with her friends, and spend the afternoon with her, I keep hearing the Associate Mission Statement. Barb has been a blooming example, wherever she has found herself planted, of those three short, yet profound sentences in that statement.

“We Associates of the Sisters of Charity of Cincinnati, are women and men striving to live the Gospel values.”

Barb grew up in St. Michael’s parish. She was a 1959 graduate of Seton High School. During her formative years her family was a shining example of the corporal works of mercy. She was exposed to the Sisters of Oldenburg and Sisters of Charity during those years. She was even taught to play organ in the eighth grade. As a young adult, she envisioned herself as a nun, a nurse or perhaps a teacher. You can certainly see how much she was influenced by the Gospel values during those years by her choices!

But, as so often happens, life stepped in the way of those plans. Her father had died and her mother required care. Barb stepped up to attend to those needs, while doing office work to provide for them financially. There she was living out the Gospel values, in the place she found herself planted! If a Girl Scout leader was needed at St. Lawrence, Barb found time to help. Knowing all the while that these young girls needed good Gospel living role models.

“Called by God, we choose to be in mutual relationship with the Sisters of Charity guided by their Mission Statement.”

As time marched on, Barb developed a deep soul hunger for more than the Gospel readings and homilies that St. Lawrence was offering. She gathered some women together and found that the Sisters of Charity would give retreats at the Motherhouse. She met S. Esther Marie Humbert during these retreats. However, it was a chance conversation she had with S. Annina Morgan that had a profound influence on her. S. Annina approached her one day and invited Barb to come to see her. But Barb, hesitated, wasn’t sure where to find S. Annina, so a year passed. But, oh my, when Barb did start meeting with S. Annina, how she fed that deep soul hunger! Barb still cherishes a series of five books that she studied in depth with S. Annina.

During those years, she would take individuals into her home that needed assistance. She aided any she could. She became an Associate in Mission in 1989. She continued living the Gospel message wherever she saw the need, blooming where she was planted.

“We commit ourselves to participate in this mission through our individual life situations.”

Barb was certainly listening to the Call of God when she was led to an apartment in the Senior Chateau on the Hill in East Price Hill, Cincinnati. During her years there she was able to help many residents in myriad ways. She has even been credited with saving a lady’s life! She became an activist, helping to get the proper Access transport service for the 180 dwellers of the complex. If something needed doing or someone needed help, Barb’s phone would ring for a solution to the problem.

Now, she finds herself at a new location, the Samuel W. Bell Home, still blooming where she is planted, living out the Gospel values. On Sunday, June 22, she made her lifetime commitment to the Sisters of Charity of Cincinnati, promising to continue to live out the Mission Statement as an Associate in Mission. God bless you Barbara Raymond!