Associate Spotlight – It All Begins With Faith 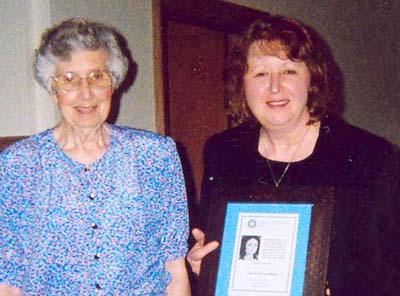 When Carol Llewellyn was approached by S. Emily Anne Phelan about becoming an Associate, though she was ecstatic and eager to begin the discernment process, she couldn’t help but wonder, “What had Sister, a deeply religious and intelligent woman, seen in me that compelled her to ask me to become an Associate?”

After speaking with Carol, the answer is clear; her undying faith and commitment to the SC mission comes naturally and pervades her entire spirit.

“At certain points in time I contemplated becoming a Sister, but I chose to marry and start a family. Becoming an Associate allows me to still be a part of the Community,” she said. “This was the best decision I could make.”

“I would take my two sons to the St. Mary-Corwin Chapel with me in the mornings. We would see everyone at morning Mass and that created a bond between us,” Carol said when contemplating the relationship that she had developed with the Sisters of Charity at the hospital. “They would always ask about my sons and my family. They cared deeply.”

In 2012, Carol retired from her position at the hospital after 40 years due to health issues. It was not easy for Carol, a woman so passionate about the SC mission and so devoted to helping others, to be slowed down by illness, but it was through her connection with God that she was able to accept with grace what God had in store for her. Carol believes that it is because she is an Associate of the Sisters of Charity that she has learned to see her health in this more accepting light.

“Though my health keeps me from doing everything that I would like to do, I have learned to appreciate every aspect of what God has given to me,” said Carol. “I pray the rosary daily and always pray for the Sisters, Associates and the SC mission.”

Carol’s health may have slowed her down, but it has not stopped her. She returned home in August from a month-long road trip with her husband and continues to travel from her home in Pueblo to see her two sons, one located in New York, the other in Washington, D.C.

“I try to carry out the spirit of Elizabeth Seton through my daily interactions with people and through prayer,” said Carol. “I know that it all begins with faith and being with the Sisters has only helped to deepen my faith.”