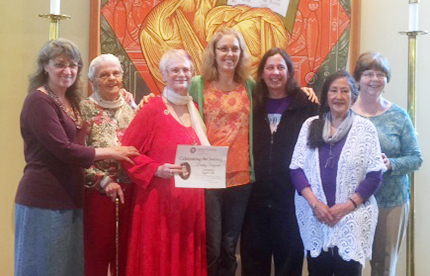 Though she must deal with Alaskan winters living in Juneau, a city in Alaska’s panhandle, new Associate Destiny Sargeant loves living in what she calls “God’s country.” After earning her degree in psychology in California, she felt that she wanted to escape the bustle and smog. “I wanted to be able to breathe the air,” Destiny remembers.

As a psychologist of 25 years, Destiny has followed the example of Elizabeth Seton through her constant devotion to helping others. She has focused on “Critical Incident Stress Management,” assisting patients to cope with traumatic events that they have experienced.

This led her to Ground Zero in New York City, following the Sept. 11, 2001, terrorist attacks. Along with a team of colleagues, she worked with the police who had to attend to the wreckage, giving tips and other assistance to help them cope with the extreme stress of their situation.

Furthermore, she specializes in women’s health, and operates a Curves Women’s Fitness Center; she is also an elected member of the school board for her district. “The Holy Spirit gives me nudges to where I should be,” says Destiny of her motivation for service.

Destiny did not hear of Elizabeth Seton or the Sisters of Charity, however, until her friend—a fellow Associate—told her about them. “I was intrigued and kept my eyes open, and learned more,” Destiny relates. She felt that the Sisters’ own convictions about serving others matched her own. This eventually led her to S. Delia Sizler.

“I like people who do what they say they’re going to do,” Destiny says of her admiration of S. Delia’s work ethic. She felt driven to help S. Delia establish Haven House, an institution that ministers to women recently released from prison.

In 2008, Destiny converted to Catholicism, and, after a year-and-a-half of study with Associate Mary Neary, made her commitment as an Associate in Mission on Aug. 7, 2015.“I wanted to belong to something bigger than myself. The world is not just about our selfish needs,” Destiny says of her new role.

She meets monthly with her group of fellow Associates, who all serve the community in different ways. Destiny plans to continue “actively sharing and caring” as a believer in the charism’s call for community, service, and love.

Destiny is also devoted to her two children, a 16-year-old daughter and a 23-year-old son, both of whom she adopted from the Marshall Islands. Currently, her son is pursuing missionary work, and her daughter is just starting her junior year of high school.