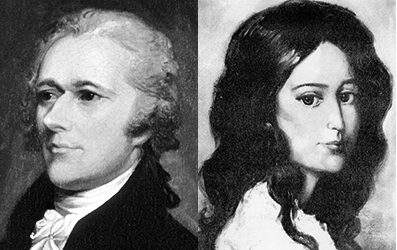 Of late Alexander Hamilton has become a celebrated folk hero due to the popularity of the smash Broadway hit, “Hamilton.” Few realize that our own Elizabeth Bayley Seton had a close connection with this founding father of our nation.

Hamilton urged that successful men of ability were needed in New York’s recovery after the American Revolution. This attitude, coming from such a prominent figure, opened the way for men like Richard Bayley and William Seton, who had supported the British during the Revolution, to take their places as leading citizens in the new republic.

Seton, a skillful, honest, and amiable businessman, was chosen as the cashier of the Bank of New York when it was organized by Hamilton in 1784. Working closely with Hamilton, William Seton secured the position of clerk of discount for his son, William Magee Seton.

A decade later, when the younger Seton married Elizabeth Bayley, the young couple resided in one of the splendid private residences on Wall Street where they were neighbors to Alexander and Elizabeth Schuyler Hamilton. Through the late 1790s, the couples shared membership at Trinity Episcopal Church, and participated in social events such as the Commemorative Ball celebrating George Washington’s 65th birthday. In addition Elizabeth Hamilton was, along with Elizabeth Seton, a founding member of the Society for the Relief of Poor Widows with Small Children.

At the same time Elizabeth’s father, Dr. Richard Bayley, was serving as New York’s health officer. Each winter he traveled to Albany where he lodged at the lieutenant governor’s house, brought health issues before the state legislature, and mingled with Alexander Hamilton, Gouverneur Morris, and other men of “superior sense” and “great brilliancy of wit.” He wrote to his daughter, “I esteem it a high good fortune to be on a footing of communication, of feeling, and sentiment with them.”

Shortly after Elizabeth Seton’s return from Italy, Hamilton was killed in a duel with Aaron Burr. On July 12, 1804, muffled bells tolled all day, from dawn to dusk, throughout the city, and all inhabitants were ordered to suspend business. Elizabeth wrote of this “melancholy event – the circumstances of which are really too bad to think of.”

The Seton’s, the Bayley’s and the Hamilton’s were part of a close circle of powerful, prominent, and privileged families who enjoyed connections and formed friendships through business, church, benevolent work, and society as they guided the new nation through its critical early years.