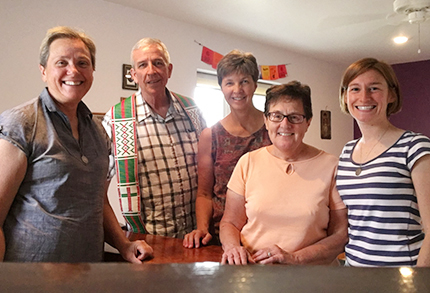 For new Associate in Mission, Columban Father Bill Morton, serving God is synonymous to serving those in need and Fr. Bill sees that realized on a daily basis through the generosity of the Sisters of Charity. Fr. Bill’s service on the U.S./Mexico border and help with the Santo Niño Project demonstrate how religious and lay people alike can remain active in ministry despite their many other daily responsibilities.

While he was aware of St. Elizabeth Ann Seton, herself, Fr. Bill had not heard of the Sisters of Charity of Cincinnati until he arrived in El Paso, Texas, in 1996 and met the Sisters who were involved in Holy Spirit Church and Clinica Guadalupana. He became friends with Sisters Janet Gildea, Peggy Deneweth and Carol Wirtz and they collaborated in one another’s ministries over many years. In 2016 Fr. Bill received an invitation to become an Associate in Mission and, after two years of discernment, accepted. In April 2018 Fr. Bill studied under the tutelage of S. Janet Gildea to learn about the history of the Sisters and their charism of charity. This included reading and reflection on the heroines of the Community, such as Sisters of Charity of Cincinnati founder Margaret George and Servant of God Sister Blandina Segale and their respective ministries.

As an Associate, Fr. Bill continues his Columban mission in Anapra, Mexico as pastor of Corpus Christi parish, while at the same time serving as chaplain to the Santo Niño Project which is only a mile from the parish, as well as celebrating the Eucharist at times with the Sisters themselves in Casa Caridad. “The Sisters have impressed me with their generous spirit of communal hospitality and their commitment to serving the poorest of the poor,” he says.