Inspiring Youth: A Legacy of Humor and Service 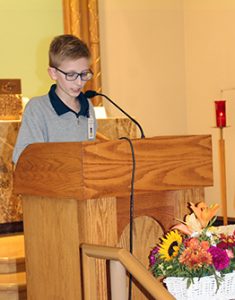 Twice a month, Noah acts as a lector for the Sisters of Charity during Mass in Mother Margaret Hall chapel.

Before retiring from active ministry, S. Cookie ministered as a teacher for first grade and offered her services to various orphanages and group homes in the Ohio area. Not only has Sister touched the lives of her students, but she has inspired Noah, as well. “He always asked me about stories from my ministries,” she says. His interest has hardly waned since he was younger.

“Well, I’ve been here for as long as I can remember,” Noah responded when asked about how long he has been visiting. In fact, S. Cookie shared a picture of a young Noah in the Motherhouse chapel, one that she entitled, “A juvenile delinquent at 11 months old.” Sister noted that Noah has always wanted to come to the Motherhouse. “From the beginning he showed an interest,” she says. “We all thought he was going to bum out, we didn’t think he would want to do it.” Fortunately for the Sisters, it meant more to Noah than just visiting his great-aunt; rather, he felt a distinct desire to deepen his relationship with God. Noah was recently interviewed for a “Tending the Soul” video, where he mentioned that S. Cookie and his great-grandmother were among his role models that inspired a devout prayer life in him. “[S. Cookie] is caring, compassionate and just so kind,” he says. 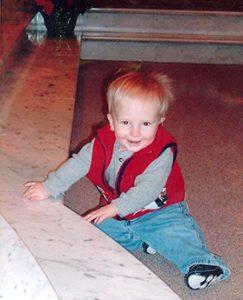 Noah Kaffenberger at 11 months old in the Motherhouse chapel.

Noah has been making weekly visits to the Motherhouse for piano lessons for six years and has developed a musical skill that he has shared with the Sisters by playing at Mass and performing in concerts for the Sisters. Twice a month he even does some of the readings for Sunday Mass. When he’s not helping at Mass, Noah can be spotted visiting the other retired Sisters. “Basically any time we can sneak him in,” S. Cookie says, “And he gets no salary!” Because of his frequent visits, Noah has not only become a welcome addition to the Community, but he has earned a badge from the HR Department. Noah always jumps at the chance to be a part of the Community in any way he can. “This place is important because it’s a wonderful place, the Sisters are just such kind and compassionate people,” he says, “It’s a beautiful place.”

The bond that Noah shares with all of the Sisters is the same as the bond that he shares with his great-aunt: faith. Faith has always been an integral part of Noah’s life, as he and S. Cookie mentioned that the ministries of the Sisters have inspired them both. However, the visits that Noah makes to the retired Sisters has inspired them to see such faithful youth and reminds them of their time as teachers. Because of this, both Noah and the Sisters cherish the time spent together. 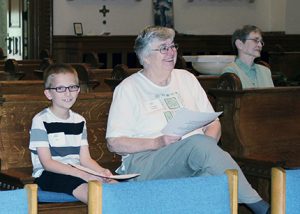 Noah Kaffenberger (left) and his great-aunt S. Cookie Crowley (right) attend Mass in 2015 for the Year of Consecrated Life prayer day at the Motherhouse chapel.

With his Confirmation just around the corner, Noah is just as strong in his faith today as he has always been. Though he has not picked a Confirmation name, Noah is sure that he wants to pursue a career in music when he gets older, all the while maintaining a prayerful life. Sister states that she is comforted to see such a faithful generation that is growing up at this point in her life. She is incredibly proud of all that Noah has accomplished at such a young age as are the rest of the Sisters that Noah considers his friends.