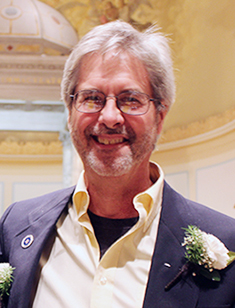 James Weber made his commitment as an Associate in Mission on Sunday, Nov. 16 in the Motherhouse chapel. During the ceremony, Jim, alongside his companion, S. Janet Gildea, was called forward to read his personal statement and make his formal request to the Community. Learn more about one of our newest Associates in the following question and answer.

Where do you currently live?
Cincinnati, Ohio.

Are you currently employed?
I’ve been a practicing general dentist since 1975. I now work part-time in Anderson Township.

Tell us a little about yourself.
I’ve been an advocate for social justice issues since my college days. I have particular interest in earth justice issues. I’ve been active in my parish, serving for more than 10 years on the social action committee. I was involved with Boy Scouts for many years and helped coach various sport teams during my children’s elementary school years. I have developed skills in database creation and designed the management and accounting software for my dental office. I also develop and manage websites. I have, more recently, taken up woodworking and set up a home shop.

How did you become acquainted with the Sisters of Charity of Cincinnati?
Not only was I educated in elementary school by the Sisters of Charity of Cincinnati, but I have two great-aunts, S. Rose Anthony and S. Rose Marion Olberding, who were SCs. My mother was a graduate of their Academy and College. My wife, Debbie, is also a graduate of their College.

What compelled you to become an Associate of the Community?
Over the years, I have come to know a number of Sisters through various programs and encounters. I had considered Associateship since my wife became one in 2010. But I would have to say that I determined that I wanted to move forward with the process when Debbie and I had spent some time in the Anthony, New Mexico, SC Community in Casa de Caridad. One of the Sisters there was deeply touched by my great-aunt, S. Rose Anthony, and after I learned that, I suppose I was, too.

How have some of the Sisters or your fellow Associates touched you?
I, of course, was touched by the Sisters who taught me in elementary school. Later in life, I was profoundly impacted by the earth justice work of S. Paula Gonzalez through various workshops at EarthConnection, programs and retreats. For the past eight years, I have been involved with the work of S. Sarah Mulligan in Mixco, Guatemala, both visiting the clinic there to work and working with a nonprofit in the United States that provides financial support. More recently, I have been touched by the work of S. Janet Gildea, my mentor, and her Community at Casa de Caridad.

Do you see yourself reaching others similarly?
With God’s grace and the support of the SC Community, that is my hope.

In what ways do you feel you carry out the spirit of Elizabeth Seton in your daily life?
For some time now, I have tried to always be conscious of how my lifestyle decisions impact my fellow humans and all of creation. It is quite an effort, but I do try to live simply, humbly and with charity toward all.