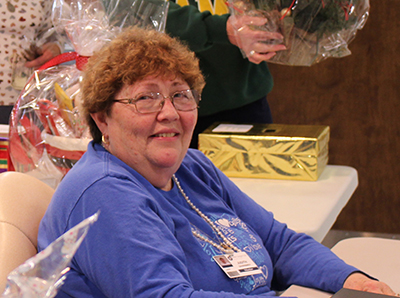 In January 2008, Judy Sauerbrey attended a retreat in the Cedars Auditorium located in the Mount St. Joseph Motherhouse. It was during the retreat that Judy had the realization that she would love to belong to a group of faith-filled women. “It hit me,” she recalled, “that I was in the midst of just that!”

S. Terry Thorman was the one who first brought the idea of becoming an Associate to the forefront of Judy’s mind. “She told me that she would love to be my companion and she was the one who got me an application.”

Like all life decisions, it was necessary for Judy to take the time to discern becoming an Associate.

The following Friday Judy and her husband attended a theology dinner at Xavier University in Cincinnati that Mary Jo Mersmann, SC director of Associates, and her husband also attended. Seeing and talking to Mary Jo was exactly the sign that Judy needed to move ahead with taking the steps to become an Associate of the Sisters of Charity of Cincinnati.

That retreat in the Cedars Auditorium was not the first significant encounter that Judy had with the Sisters of Charity of Cincinnati. She first came to Cincinnati from Washington, D.C. to teach at Seton High School in 1976. It was S. Joseph Marion Shappelle who helped her make this transition.

“She definitely took me under her wing,” Judy said. “She was so calm and so peaceful. I do think she was what probably kept me in teaching. I was so happy I was able to tell her how much she meant to me before she passed away.”

S. Joseph Marion was not the only Sister who has made an impact on Judy. “So many Sisters have touched my life,” she said. “They teach me so much every time I come into contact with them.”

Judy currently lives in Bright, Indiana, and spends her time as a retired teacher volunteering. She volunteers at Mother Margaret Hall where, because of her interest in women’s studies, she finds the stories that the Sisters have to share particularly intriguing and spends hours talking to them about their lives.

In addition to spending her time at the Motherhouse, Judy is an avid quilter, creating quilts for charities such as Wounded Warriors. She loves to read and write and attends and teaches classes at the Osher Lifelong Learning Institute at the University of Cincinnati.

Being an Associate has done much for Judy, but in her opinion, the most important thing that she has learned has been the value of community. When she had surgery or requested prayers for her mother, she was nothing short of overwhelmed with the support she received. “I know there are women here who have my back. What more could I ask for?”