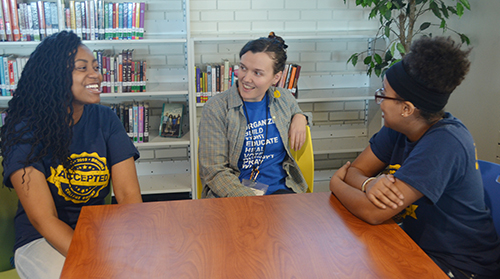 The opportunity for DePaul Cristo Rey High School (DPCR) students, inmate Tyra Patterson, Sister of Charity Ruth Kuhn and the Cincinnati Ohio Justice and Policy Center (OJPC) to interact this fall may have included some divine intervention. You be the judge.

OJPC began investigating Tyra Patterson’s case in 2012, one year after the Ohio Parole Board refused to release her for another seven years. Patterson had been serving a life sentence since 1994, when she was 19 years old. As an active Board member of OPJC, S. Ruth first met Tyra at the Dayton Correctional Institute in 2013 and was deeply touched by the meeting. She visited her frequently, formed a personal relationship and helped to plan an interfaith pray-in to raise awareness of Tyra’s case.

At the same time, DPCR religion teacher Katie Sellers was seeking an opportunity to help the Gospel come to life in practice for her junior students. She learned of OJPC’s work and saw it as a possibility. After a first semester of studying community-building, non-violent behavior and the sacraments, students engaged in second semester ‘how can we make a difference.’ It soon reached beyond the classroom to afterschool ‘club’ time, a forum for applying Gospel teachings to contemporary issues.

The students learned the particulars of Tyra’s case, became familiar with the facts, and were inspired with the ways she had made positive use of her time while incarcerated. “She wasn’t bitter or angry. She was a ROTC leader, earned her GED and still had dreams,” DPCR student Kiare remarked. Students wrote letters, and created a video which they sent to Ohio Governor John Kasich asking him to pardon Tyra. They hosted Skype sessions with Tyra through OJPC, developing an ongoing relationship. Teacher Sellers saw the class move from memorizing morality to living it in the world.

“It was transformative for all of us,” Sellers said. “Students took the initiative. It took courage and vision on the part of our school leadership; they gave their blessing and support to the students to follow where their conscience called them as they worked for justice. All necessary parts were aligned.”

Before the Oct. 24 parole hearing – on Sept. 14 – S. Ruth died unexpectedly. She had new powers and new connections. One month later, Tyra Patterson was granted parole and freed on Christmas morning 2017.

In a recent sit-down session DPCR senior Janasia said, “[Tyra] is one of the most positive people I have ever met. Ever since I was in the fourth grade I have wanted to be a criminal defense attorney. After learning of Tyra, our teacher giving us this real-life classroom opportunity and working as a summer intern at OJPC, I am more convinced than ever that this is what I want to do with my life. We love Tyra.”

Senior Kiare believes everything happens for a reason. “Learning of Tyra’s parole and her desire to give back to those who fought for her release is empowering me to be a better person. She is teaching me to never give up.”

Currently Tyra is working at OJPC, putting into practice her paralegal certification. The DPCR students look forward to meeting her in person. OJPC honored S. Ruth in their recent newsletter, thanking her for her faithful service. Ms. Sellers met S. Ruth in August where she was able to express her gratitude for her outreach to Tyra. All involved with this experience of ‘justice in action’ are trusting in Governor Kasich’s pardon of Tyra before he leaves office; yes this still includes S. Ruth. Her spirit is ever present.