Behind the Scenes: The Seven Must-See Features of the Immaculate Conception Chapel

The Immaculate Conception Chapel at the Mount St. Joseph Motherhouse is a magnificent place of worship. For those who have visited the Sisters of Charity Motherhouse and had the opportunity to take a peek through the chapel doors or sit in its pews, the awe-inspiring view and its rich history bring about the most peaceful of feelings. Here are the seven exquisite features you don’t want to miss when visiting the Motherhouse chapel. 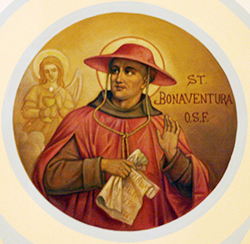 The central dome contains murals by Richard Bachman. A painting depicting the Blessed Sacrament is surrounded by four medallions of Doctors of the Church noted for their devotion to the Eucharist: St. Thomas Aquinas (left front) is reading his treatise on the doctrine of the Holy Eucharist; St. Bonaventure (right front) is crumbling up his essay as he listens to that of St. Thomas. St. John Chrysostom and St. Ambrose are shown in the two medallions toward the back. 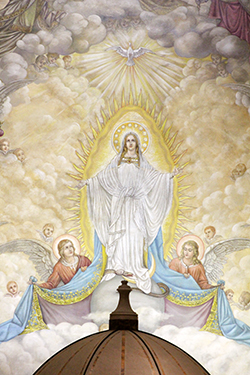 William Lamprecht’s mural in the sanctuary dome is of Mary Immaculate. It depicts the Book of Revelations 12:1, “a woman clothed with the sun, with the moon under her feet, and on her head a crown of twelve stars.” Above the Virgin’s head is God the Father and the Holy Spirit in the form of a dove. On either side are the angels Gabriel and Michael. The angel at the base of the mural carries a scroll on which is written In umbra manus suae protexit me (In the shadow of his hand he has protected me). The painting, which took eight months to complete, is double-curved like the inside of a bell. The mural rises 65 feet above the wainscoting with the main figure measuring 15 feet from the top of her head to the bottom of her mantle.

The four basilica columns surrounding the tabernacle are breccia marble with paneled marble supports. The octagonal baldachin is inlaid with triangles of red, green and yellow marble. It is inscribed with the words Dei Parae Immaculatae (Immaculate Parent of God). The tabernacle is white marble inlaid with various colors. The door contains pieces of lapis lazuli (blue) and fior de persico (peachblossom) marble. 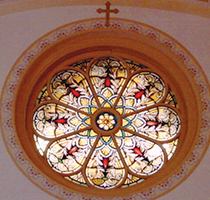 Located high above the organ pipes, the Rose Window and the stained glass windows were imported from Munich, Germany, with one exception. “Christ Blessing the Little Children” window was made in Cincinnati. 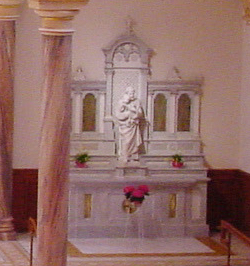 This altar was donated by Reuben Springer in the 1880s to be the main altar in the first St. Joseph’s Motherhouse, which burned in 1885. When the present chapel was built it became a side altar. 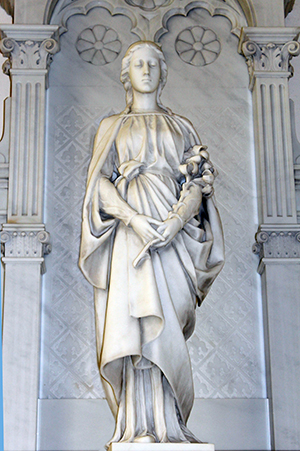 The statues of “St. Joseph and Child” and “Madonna with the Lilies” were created by Cincinnati sculptor Clement Barnhorn and were part of the original chapel furnishings. The statues of St. Vincent and the Sacred Heart were purchased when the chapel was originally furnished. 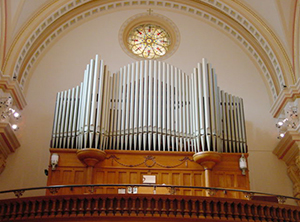 The pipe organ was manufactured by the Austin Organ Company of Massachusetts and installed at the time the chapel was furnished. It was a sample of the company’s finest craft, introduced into this part of the country as an advertisement on the condition that patrons could see and try in anytime.