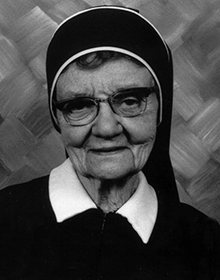 During S. Augusta Zimmer’s early years as classroom teacher in Chicago, Ill., she shared her gift of drawing by helping her co-workers with their classroom boards. As a result she was told to attend summer class until, in 1928, she got word that she was to be missioned to the College of Mount St. Joseph to teach art. Horrified at this prospect, Sister wrote to Mother Irenaea Fahey who was a musician, telling her, “If you had been allowed to play piano for a couple of hours on Saturday or for three or four weeks in the summer time, would you feel equal to teach college music students?”

S. Augusta was then given the green light to attend classes at the Chicago Art Institute. The budding artist won a competition awarding her a fellowship to study abroad. She spent 15 months in Europe, the Middle East and Egypt. Upon her return S. Augusta began her 33-year career at the College of Mount St. Joseph. One of her student’s spoke for many others when she remarked, “S. Augusta’s dedication, animation and expectations have made my life so much fuller.”

In addition to being an extraordinary teacher, S. Augusta was prolific in her own artistic productions. As amazing as the number and quality of her works are, so are the types of media in which she produced. This gifted woman saw life as beautiful and embraced everything as a gift from God. And this spirit flowed into everything she created with her art.