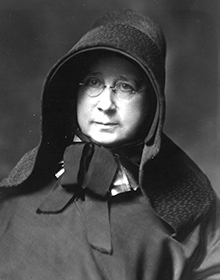 “It was in Albuquerque, N.M., that I began to develop my talent as an artist,” S. Ernestine Foskey relates in her memoirs. After serving on several other missions, this young Sister was sent to St. Vincent Academy from 1888 to 1896 where, besides having her own classroom, she taught art for two hours each afternoon. “I had no formal lessons,” she recalled, “but all I did was accomplished by reading and experimenting.”

This changed, however, when she attended the Cincinnati Art Academy from 1910-’12. Here she studied under such notable teachers as Frank Duveneck and Clement Barnhorn.

This round-faced, rosy-cheeked Sister spent the rest of her days in her art studio at Mount St. Joseph where she was prolific in her production of oils and watercolors. She painted several portraits of Elizabeth Seton as well as those of the Mothers and S. Anthony O’Connell. She also did three large “Angels of the Battlefield” paintings and many natural life compositions.

While working in her studio she welcomed everyone with her sparkling eyes and delightful smile. Those who knew her spoke of her simplicity, her cheerfulness and her boundless energy.