“Prudence consists in
speaking about important
matters only and not
relating a lot of trifles
that are not worth saying. 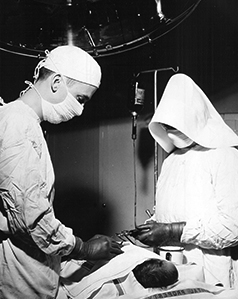 Born to Jewish parents in Jackson, Mich., in 1906, S. Eugene Marie Carpe (formerly Marcella Carpe) was attracted to Catholicism at a young age. Growing up, she and her childhood friend, Alice Warner, would visit St. Mary’s Church in Jackson to call on the Sisters. They would ask S. Margaret Agnes if they could walk her home every evening.

S. Eugene Marie eventually was baptized Catholic. Shortly after, in September 1924, she came at the invitation of Mother Iraneae to Mount St. Joseph Academy to finish her education. The following year, she entered the Community.

S. Eugene Marie’s first assignment was to teach first grade at Holy Name in Cleveland, Ohio. Stories circulated about her time there. One said that by recess on the first day, she had taught the outline of what she was supposed to cover for the entire year. Another said she walked in the first day and ordered the children to write their names. “Tears were all over the place because the children didn’t know how to write!”

It wasn’t long before Sister’s ability in science began to shine. She was missioned to spend one year studying at Divi Tome in the science institute. The following year she was missioned to Cincinnati Good Samaritan Hospital to work in the medical laboratory. This was the beginning of a distinguished career.

S. Eugene Marie was interested in bone marrow studies and hematology, particularly the Rh factor. In 1941, after visiting Boston Children’s Hospital to observe the use of the replacement transfusion, Sister directed a resident staff physician, Charles Pfahler, in performing the first exchange transfusion treatment in the Cincinnati area for newborn babies affected by the Rh factor. Pfahler said Cincinnati Children’s was skeptical about the value of the treatment but Sister stood her ground and within a few years the exchange transfusion became acceptable.

According to the Cincinnati Enquirer at the time, “Hospitals in every corner of America sought the benefit of [S. Eugene Marie’s] talent. She was the first nun administrator to be elevated to the presidency-elect of the Ohio Hospital Association and the first president of the Greater Cincinnati Hospital Council. She contributed frequently to technical, hospital and laboratory journals on subjects ranging from hematology to architecture, personnel management and interior decorating.”

Sister was appointed administrator of Good Samaritan Hospital in 1950; two years later the local media named her “one of the top career women among the Sisters of Charity because aside from supervising the operations of the hospital, she continues research in the Rh blood factor.”

But it is the remembrances of her coworkers, Sisters and acquaintances that truly capture S. Eugene Marie:

S. Margaret Ebbing: “As my beginning career in nursing/administration was in obstetrics, the contact was one of deep interest and thrill that she made the breakthrough in the field for these little ones, who were previously doomed. I remember how humble she was about the vast impact she made in medicine. All the acclaim she gained through this was attributed to others.

“She was fearless in her attempt to bring the ethical standards of health care to its optimum. She held respect and admiration from so many in the field, not only in the state but throughout the US.”

S. Joseph Ignatius Owyang: “I found S. Eugene Marie an honest, humble and sensitive person. She was firm and decisive; one knew where one stood with her, but she would listen and accepted differences of opinions.