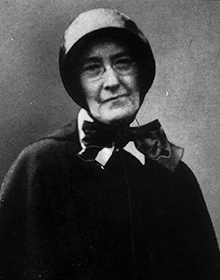 Mary McCann was one of the star pupils who attended Mount St. Vincent, Cedar Grove, in its earliest days. From this vantage point she watched the history of the Community in the making and had personal encounters with Mother Margaret George and other founding members.

When S. Mary Agnes entered the Community in 1867 there were 130 members; when she died in 1931 there were 1,130! Her fertile mind and keen powers of observation, as well as her personal participation in events, placed her in an excellent position to become the recorder of Community history. For the 1909 centennial of the founding of the Community she wrote a biography of Elizabeth Seton. Three years later, she wrote one of Margaret George. At the same time she was writing words for hymns and poetry, which was eventually published in two volumes as Little Blossoms.

S. Mary Agnes’ dissertation, “Archbishop Purcell and the Archdiocese of Cincinnati,” qualified her to become the first Sister of Charity to receive a Ph.D. Her three-volume History of Mother Seton’s Daughters showed her to be a fierce champion of the Sisters of Charity as the true descendents of Elizabeth Seton. As a member of the American Catholic Historical Association she was the only woman to present a paper at the organization’s first annual meeting. Undoubtedly, S. Mary Agnes’ writing made a contribution both to the Sisters of Charity and to U.S. Catholic history.