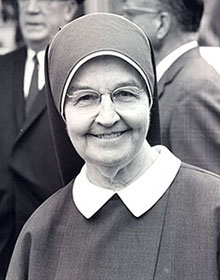 When S. Mary Janet was appointed principal of Cathedral High School in Denver, Colo., in 1939, she had already established a reputation for being a “good school woman.” It was here that she had the opportunity to implement some of her innovative ideas on education. In addition, she established warm relationships with the students as she encouraged them to mature into educated Christian adults. One student recalled her as exuding “wisdom and tolerance and good will shining out of her mind through her twinkling eyes.”

Beginning in 1945, S. Mary Janet established a long working relationship with educators at The Catholic University of America in Washington, D.C. first as a doctoral student, later as a faculty member. At the same time she worked with the Commission on American Citizenship, where she was charged with developing a curriculum for Catholic secondary schools that included an emphasis on social action and citizenship responsibilities. Through her studies, publications and lectures S. Mary Janet became known as one of the foremost educators in the country.