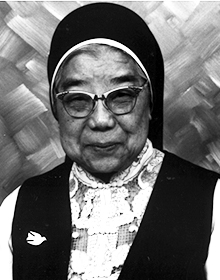 When Mary Ling entered the Sisters of Charity in Wuchang, China, in 1933, she didn’t know what type of work she would do. Sister was assigned to St. Joseph’s Hospital in Wuchang. “They needed me in the hospital because so much business needed to be done in Chinese and I was bilingual,” she recalled. After the 1937 Japanese invasion of China, the Sisters continued their work under dangerous and trying conditions, and in 1943 when the foreign Sisters were interned in Shanghai, S. Maurice became the manager at St. Joseph. The Sisters, orphans and patients had their own vegetable garden and scrambled for wood in order to survive. After the war S. Maurice became S. Frances Maria Hautman’s right-hand assistant in building the new hospital. Despite fear of trouble with the authorities, they moved the project forward almost to completion. But when the Communists gained the upper hand, the Sisters were warned to evacuate. S. Maurice was among the finial group to depart, leaving Shanghai on Jan. 8, 1949. After S. Maurice’s return to the United States, she became both an X-ray technician and a medical technologist. She served in Sisters of Charity hospitals in these capacities until 1970 when she began work in pastoral care. S. Maurice died April 7, 1990.