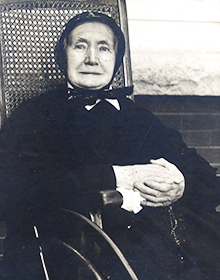 S. Vincent O’Keefe was a familiar and welcoming face who “was a friend of every doctor and patient in the institution” for nearly the first 50 years of Cincinnati Good Samaritan Hospital’s existence. Among the five pioneer Sisters of Charity who opened St. John’s (Good Samaritan) Hospital, this small, gentle and courageous pioneer was a pharmacist who learned her trade under the supervision of an esteemed corps of doctors. They proclaimed her “the finest pharmacist in the country” at a time when flax seed and slippery elm poultices were popular treatments. S. Vincent was there as the hospital grew from its 21-bed capacity at Broadway and Franklin, through its move to Third and Plum, and to more than 100 beds at Sixth and Lock. She took a special, motherly interest in the resident physicians, whose quarters were adjacent to her second-floor pharmacy at Sixth and Lock.

Aside from service in the Civil War and brief stint as superior of the pioneer group of Sister who opened St. Vincent Hospital in Santa Fe, N.M., in 1865, S. Vincent spent all other working years at Good Samaritan. Her ministry came to an abrupt end when she fell on a slippery floor in 1899. She sustained an injury that confined her to a wheelchair until her death on Feb. 2, 1912.