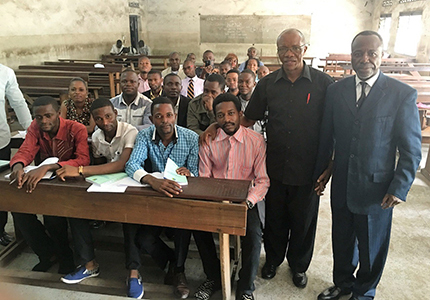 With the help of donations from the SC Ministry Foundation, Dr. Pashi (right) has been able to help a school in the Democratic Republic of the Congo provide textbooks to its students.

The Democratic Republic of the Congo, or DRC, is a country that few know about and even fewer have visited; in fact, most of the travel websites of the country urge you to reconsider going there because the country has become a focal point of some of the most heinous crimes against humanity. With a civil war swooping across the land, many of the citizens have become mere collateral damage. Dr. Claver Pashi, who makes regular visits to the country, has witnessed the injustices facing the citizens firsthand and allied himself with the Sisters of Charity to respond to this issue with tenacity. Associate in Mission to the Sisters of Charity and chair of the Congo Committee for the Office of Peace, Justice and Care for Creation Rita Wesseling has also been an integral part of the Sister of Charity’s mission in the DRC in an effort to curb the oppression that this nation and its citizens are facing.

The DRC has become the sight of a multitude of injustices, especially against the women of the nation. The brewing civil war originated in a dispute for valuable minerals in the country, but the war has already cost the lives of 6 million people. In addition, the nation is subject to invasions from other pillaging countries that leave a trail of wreckage in their wake. Because of all that is happening, children are deprived of formal education because of the country’s lack of resources. Dr. Pashi has made this issue his focus and combats it by giving children and young adults textbooks to help with their studies. The funding of this project was completed by the generous donations of the Sisters of Charity. 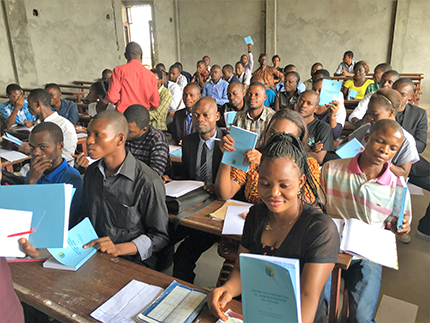 According to Associate Rita Wesseling, “There [was] an outpouring of singing and dancing and clapping” when Dr. Pashi delivered the textbooks to the students.

The Office of Peace, Justice and Care for Creation places a specific focus on the DRC and ending violence there. As such, the Sisters of Charity’s role in facing this issue is vital. As the acting chair of the Congo Committee, Rita has made it her focus to see that the injustices occurring in this country come to a definitive end. Not only do the Sisters of Charity provide monetary donations to the cause, but they have also designated a day each month to pray for the nation, and planned events for Congo Week at the end of October and actions to help the people of the DRC. Rita says, “The past three years we have been focusing on helping [Dr. Pashi] help the people of the DRC. Each year the Sisters of Charity donate money to Dr. Pashi to allow him to give ‘textbooks’ free of charge to his students.”

These services are in an attempt to raise awareness to the United Nations about the injustices taking place in the country and to take necessary diplomatic action. Rita says, “The Sisters of Charity and Associates took a Congregational Stand in 2010 to be informed about the human rights violations in the DRC and call on our government to do everything in its power to end violent conflicts there.” With Dr. Pashi’s unending support and prayers of the Sisters of Charity, together they can offer comfort and make change to this impoverished nation.